The Role of Voice Gateways

The basic function of a gateway is to translate between different types of networks. In the data environment, a gateway might translate between a Frame Relay network and an Ethernet network, for example. In a VoIP environment, voice gateways are the interface between a VoIP network and the public switched telephone network (PSTN), a private branch exchange (PBX), or analog devices such as fax machines. In its simplest form, a voice gateway has an IP interface and a legacy telephone interface, and it handles the many tasks involved in translating between transmission formats and protocols. At least one gateway is an essential part of any IP telephony network that interacts with the PSTN or with analog devices. In addition, when gateways are properly configured, many can take over for a Cisco CallManager when it is unreachable. 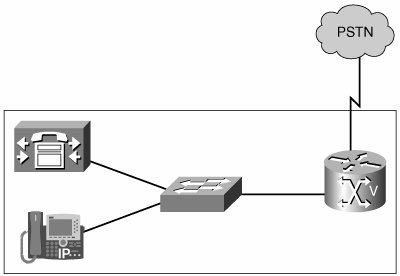 The gateway allows communication between the two networks by performing tasks such as these:

Gateways communicate with other gateways, gatekeepers, their endpoints, or their call control agents, such as Cisco CallManager or a PBX. The following are the protocols that Cisco gateways use for voice signaling and media:

This chapter introduces these protocols. MGCP, H.323, and SIP are described in depth in other chapters of this book.

Digital trunk gateways, such as the AS5000 series interface, connect an IP telephony network and the PSTN or a PBX via their trunk ports.

Analog trunk gateways, such as AT-2 or AT-4, connect to the PSTN or a PBX via analog trunks. Analog station gateways, such as an ATA186, VG224, or VG248, connect to analog devices such as telephones, fax machines, or voice-mail systems. The signaling protocols that are available vary by gateway model. The ATA186, an analog-to-IP adapter, can support two analog devices each with its own telephone number. It has one Ethernet port that connects to the VoIP network, and two voice ports for connecting analog devices. It can be controlled by Cisco CallManager and CallManager Express, and it supports SIP and SCCP protocols. However, CallManager 5.0 does not have native SIP support for the ATA186.

VG224 and VG248 are Cisco voice gateways with 24 and 48 analog FXS ports, respectively. These are line-side gatewaysthey do not interface with the PSTN, but with end-user analog devices. Both models allow a CallManager, CallManager Express (CME), or an SRST router multiple to control analog ports. They connect to a LAN via an Ethernet port, and they communicate with CallManager or CME using the SCCP telephony control (STC) application. The VG224 can also act as an MGCP, H.323, or SIP gateway.

Modules containing analog and digital ports are available for Cisco 6500 switches, allowing them to act as voice gateways. For example, the Communication Media Module (which you can also use in the 7600 series router) can contain a combination of T1, E1, and FXS ports. It uses MGCP, H.323, and SIP protocols, and it can provide Survivable Remote Site Telephony (SRST) functionality. The Voice T1/E1 and Services Module, or 6608 blade, can contain T1 or E1 interfaces, and it can perform as an MGCP gateway.