Restricting inbound calls adds a little complexity to your COR configuration. Reusing existing COR lists that are built to restrict outbound calls is usually possible, but your list names are not likely to be meaningful, and the logic might be difficult to follow.

In Example 12-4, calls from the PSTN to the lobby phone that is connected to port 2/0/0 are restricted. (Recall from Step 4 of the "Implementing COR" section that the lobby phone is an analog telephone.) Calls from the PSTN to IP phones are not restricted, as illustrated in Figure 12-2. To accomplish this, two new labels are added and assigned to a COR list with the same name: 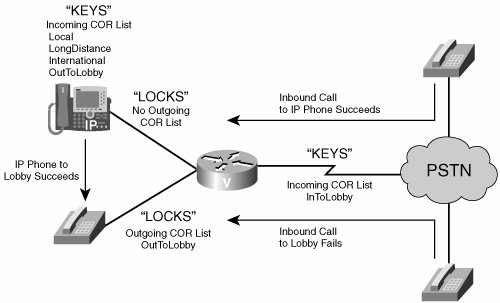