Overlapping numbering plans occur when the DIDs that the service provider assigns result in the same extension ranges being used at two or more locations. In Figure 9-1, the Miami office phone numbers are 305 555 0100-0199, and the Boise office uses 208 555 0100-0150. The extensions at the Miami location will overlap with the extensions at the Boise location if less than eight digits are used for intersite dialing. For calls placed either to Miami or Boise from the New York site, the call processing system will not know to which location the calls should be routed. 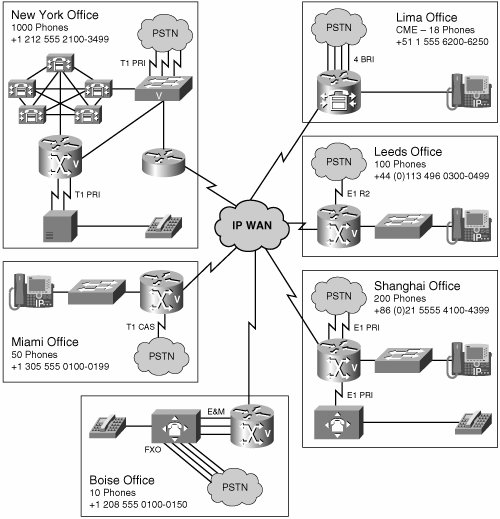 Fortunately, this problem has several solutions. Selecting a solution requires balancing ease of use and provisioning complexity.

One of the easier solutions to provision is not to assign DIDs. This allows you to select nonoverlapping extension ranges without having to be concerned about aligning with the public number. A single public number is published for the location, and inbound calls are routed to an AA or a receptionist. Whether or not to assign DIDs is primarily a business decision.

An alternate solution is to use an intersite access code and a site code to call between locations. For example, you could use an intersite access code of 8 and assign a three-digit site code to each location. Using a four-digit extension, this approach would support up to 999 sites with 9,999 devices per site. Use a site code that is easily remembered to simplify calling. Many companies try to map the site code to the area code or prefix. This works for widely distributed companies, but it can be problematic for companies that have many locations in a single area. Other companies try to use a mnemonic, such as the first three characters of the location. For example, Miami would be assigned a site code of 642, corresponding to MIA. Using site codes is fairly easy from an end-user perspective but can result in complicated implementations. To provide redundancy, digit manipulation is required to route calls over the PSTN in the event of an IP WAN failure or oversubscription. For enterprises that have numerous sites, this manipulation can result in substantial configuration.

Because of the complexities with associating mapping site codes to DIDs, many large enterprises require the user to dial an access code plus the full E.164 number for intersite calls. This minimizes the complexity of the dial plan but removes the benefit of abbreviated dialing for end users.