VPLS is particularly applicable where multiprotocol multipoint Ethernet transport is required. If only multipoint IP connectivity is required between CE routers (rather than CE switches), IPLS might be an attractive option. IPLS provides IP-only emulated LAN connectivity across a MAN or WAN.

VPLS requires that PE devices have a MAC address learning capability, along with the associated mechanisms such as aging. Unfortunately, it might be difficult to add these capabilities in the data plane (the traffic-forwarding path) to some types of PE devices. In these circumstances, IPLS may be a good solution because instead of using the type of MAC address learning mechanisms inherent in Ethernet switches, in IPLS, MAC (and IP) address learning is accomplished via signaling between PE devices (in the control plane).

As the name suggests, an IPLS can only be used to transport IP and Address Resolution Protocol (ARP) traffic. Non-IP traffic received by PE devices on attachment circuits is dropped.

Unicast and Broadcast/Multicast Pseudowires in IPLS

Traffic forwarding is also different in IPLS when compared to VPLS. In each IPLS instance (a separate emulated LAN), a unidirectional pseudowire is set up for unicast traffic from each remote peer IPLS PE device to the local PE device for each locally attached CE device. Figure A-6 illustrates this concept. 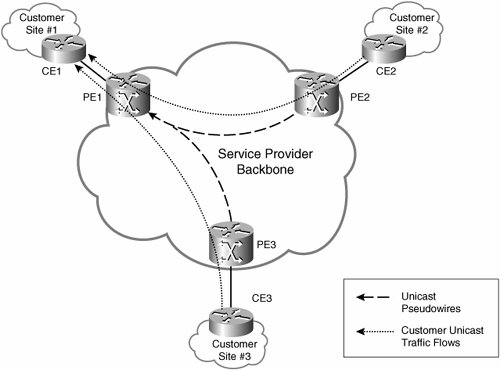 As shown in Figure A-6, there are three PE devices: PE1, PE2, and PE3. There are also three attached CE devices: CE1, CE2, and CE3. There is one IPLS instance in this example (one IP-only emulated LAN).

Unidirectional pseudowires are set up from PE2 and PE3 to PE1 to forward unicast traffic from CE devices directly attached to PE2 (CE2) and PE3 (CE3) to CE1.

Similarly, unidirectional pseudowires are set up from PE1 and PE3 to PE2 (not shown) to forward traffic from CE devices attached to those PE devices (CE1 and CE3) to CE2.

Figure A-7 illustrates the pseudowires used to forward broadcast/multicast traffic from CE2 and CE3 to CE1.

Figure A-7. Broadcast/Multicast Pseudowires in IPLS 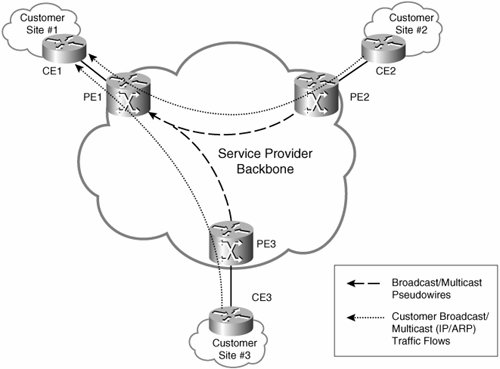 The pseudowire type used for broadcast/multicast pseudowires in IPLS is Ethernet (see Table 3-2).

Both unicast and broadcast/multicast pseudowires are established and maintained using LDP. In fact, the setup and maintenance procedures are similar to that described in Chapter 3.

When setting up pseudowires for unicast traffic, a PE device can assign the same pseudowire (VC) label to each pseudowire that transports traffic to the same locally attached CE device, which in effect creates a multipoint-to-point pseudowire.

A PE device can also assign the same pseudowire (VC) label to each broadcast/multicast pseudowire in an IPLS instance. This again creates a multipoint-to-point pseudowire.

As previously described, IPLS PE devices do not use the regular MAC address learning procedures described in IEEE 802.1D. Instead, PE advertises the IP and MAC addresses of locally connected CE devices to other PE devices during pseudowire setup.

Unicast and Broadcast/Multicast Forwarding in IPLS

When an IPLS PE device receives a unicast frame on an attachment circuit, the PE device does a lookup. If a match is found, the packet is either forwarded to another local attachment circuit or, minus its Ethernet header, over a pseudowire to a peer PE device as appropriate.

When a unicast packet is received over a pseudowire, the receiving PE device prepends a MAC header and forwards the packet to the appropriate local attachment circuit. The source and destination MAC addresses included in the header are the local PE device's MAC address and locally connected CE device's MAC address, respectively.

It is worth noting that although transport of customer traffic between PE devices is assumed to be via MPLS pseudowires in this appendix, it is also possible to use tunneling protocols such as Layer Two Tunneling Protocol version 3 (L2TPv3) or Generic Routing Encapsulation (GRE) to provide transport in IPLS.

PE devices discover the IP and MAC addresses of connected CE devices by snooping their transmissions of IP and ARP packets on the attachment circuits. After a CE device has been discovered on an attachment circuit, a PE device monitors its continued presence by periodically sending ARP requests. If the CE device fails to respond to a certain number of these requests, the PE device interprets this as a loss of connectivity with that CE device.