Before describing the various VPN technologies and models, it is useful to first describe the various customer and provider network devices that are relevant to the discussion.

Devices in the customer network fall into one of two categories:

In a site-to-site VPN, devices in the service provider network also fall into one of two categories:

In Layer 2 VPNs, such as a Virtual Private LAN Service (VPLS), an additional level of hierarchy can be introduced into the network to improve scalability (VPLS then becomes Hierarchical VPLS [H-VPLS]). In this case, the functionality of the PE device is divided between a User-facing PE (U-PE) devices and Network-facing PE (N-PE) devices.

Note that alternative (and dated) equivalent terms for the U-PE and N-PE are PE-CLE and PE-POP, respectively. In addition, where a Layer 2 PE-U device is installed in a multitenant building, this may be referred to as an MTU-s. Figure 1-2 illustrates U-PE and N-PE devices.

Other device types used in VPNs include Network Access Servers (NAS) and VPN gateways/concentrators. A NAS is a device that interfaces between an access network (such as a Public Switched Telephone Network [PSTN]) and a packet-switched network (such as an IP backbone). In a remote access VPN, a NAS can serve as a tunnel endpoint.

See Figure 1-5 for an illustration of the role performed by a NAS.

In site-to-site VPNs (discussed later in this chapter), customer user data traffic is either tunneled between CE devices or between PE devices.

Site-to-site VPNs are also occasionally referred to as LAN-to-LAN VPNs.

Protocols used to enable remote access VPNs (discussed later in this chapter) include the following:

A plethora of methods are used to model and characterize VPNs. The purpose of this section is to introduce and explain each of these models and characterizations.

As you read this section, you may ask yourself how it is that we have ended up with so many terms to describe VPNs. The answer is a desire to accurately describe the characteristics of a VPN protocol or technology but also a simple lack of coordination among protocol designers and engineers (this is getting much better), and on top of that a certain amount of "help" from our marketing colleagues ("How can I differentiate our products?").

As you read this section, be sure to refer to Figure 1-3. Figure 1-3 clarifies the relationship of the VPN models to each other; it also describes the VPN (tunneling) protocols and technologies associated with the various models.

Note that in Figure 1-3, F: denotes a former name for a particular technology. 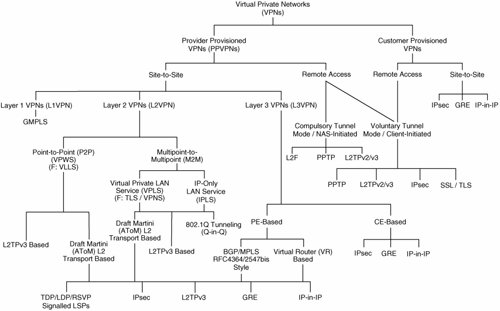 The bottom level of the hierarchy in Figure 1-3 describes protocols or mechanisms used to tunnel VPN traffic between CE or PE devices.

VPNs can be either one of the following:

Additionally, a VPN service might be offered over the backbone networks of multiple cooperating autonomous systems and/or service providers. In this case, the VPN service is known as an inter-AS or interprovider VPN service.

Examples of provider provisioned VPNs are as follows:

Examples of customer provisioned VPNs are as follows:

VPNs, whether provider or customer provisioned, fall into one of two broad categories:

Site-to-site VPNs allow connectivity between an organization's (or organizations') geographically dispersed sites (such as a head office and branch offices). 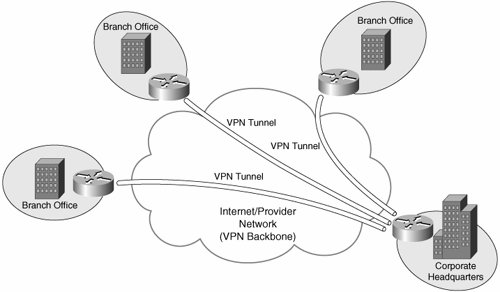 There are two types of site-to-site VPN: 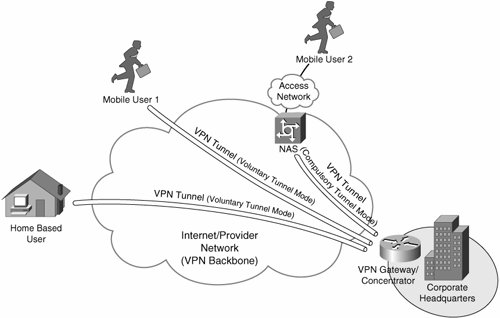 At the time of this writing, the development of L1VPNs is in its relative infancy, and so L1VPNs are not discussed further in this book.

Layer 2 site-to-site VPNs (L2VPN) can be provisioned between switches, hosts, and routers and allow data link layer connectivity between separate sites. Communication between customer switches, hosts, and routers is based on Layer 2 addressing, and PE devices perform forwarding of customer data traffic based on incoming link and Layer 2 header information (such as MAC address, Frame Relay Data Link Connection Identifier [DLCI], and so on).

There are two categories of provider provisioned L2VPN:

Layer 3 site-to-site VPNs (L3VPN) interconnect hosts and routers at separate customer sites. These customer hosts and routers communicate based on Layer 3 (network layer) addressing, and PE devices forward customer traffic based on incoming link, and on addresses contained in the (outer) IP header.

There are two overall types of L3VPN:

Remote access VPNs can be configured in either compulsory tunnel mode or voluntary tunnel mode. These two modes of operation are described as follows:

One type of remote access VPN is a Virtual Private Dialup Network (VPDN). This term can be used to describe remote access VPNs (L2F, PPTP, and L2TP) in which remote users connect over a PSTN or Integrated Services Digital Network (ISDN) to a dial NAS. User data traffic is then tunneled to a VPN gateway. With so many remote users now connecting over cable, Digital Subscriber Line (DSL), and other high-speed connections, rather than via dial connections, this term is slightly outdated.

Other Methods of Categorizing VPNs

Overlay and peer VPNs are summarized as follows:

VPNs can be either connection oriented or connectionless depending on whether VCs or tunnels are provisioned to carry VPN traffic.

Connection-oriented and connectionless VPNs are described as follows:

Trusted and secure VPNs are described as follows:

And finally, here are two or three sundry VPN classifications: