Quality of service (QoS) describes a number of mechanisms that prioritize some traffic over other traffic. QoS is sometimes known as "managed unfairness."

As previously described, you can implement QoS in a network in two ways:

There are important considerations when using DiffServ and/or IntServ in an IPsec VPN, as described in the following two sections.

Using DiffServ in an IPsec VPN

RFC2401 specifies that the contents of the type of service (ToS) or Differentiated Services (DS) field in the IP header of a protected user packet must be copied to the outer header of a tunnel mode IPsec packet. The ToS or DS field is maintained in the outer IP header of an IPsec transport mode packet.

Figure 7-54 illustrates the copying of the ToS/DS field from the protected user packet to the outer IP header of an IPsec tunnel mode packet.

Figure 7-54. Copying of the ToS/DS Field from the Protected User Packet to the Outer IP Header of an IPsec Tunnel Mode Packet

When deploying QoS in an IPsec VPN, it is important to consider that after a user packet has been encapsulated in IPsec (producing an IPsec packet), much if not all information that could be used to classify a packet is unavailable.

Information from the original user packet IP header that is maintained or copied to the outer IP header of an IPsec packet is as follows:

See Figure 7-67 later in this chapter to see the IP header.

Figure 7-55 illustrates classification of IPsec packets on router in the path between IPsec VPN gateways.

Figure 7-55. Router Between the IPsec VPN Gateways Tries to Classify an IPsec Packet

In Figure 7-55, the IPsec VPN gateway encapsulates a user packet with IPsec, and when that packet arrives at the next-hop router, it is unable to classify the packet using user packet information because this information is hidden by IPsec.

So, if you want to classify packets based on user packet information such as IP protocol number, TCP port number, or UDP port number, you should classify and mark the ToS/DS field of the packet prior to IPsec encapsulation in normal operation.

In Figure 7-55, for example, if you want to classify and mark the packet based on user packet information such as IP protocol, TCP port number, or UDP port number, you must do it on the IPsec VPN gateway.

In any network (including an IPsec VPN), classification and marking of user packets should be performed as close the packets' source as possible. Some user applications and end devices such as IP phones may mark user packets by default.

In some customer-managed IPsec VPNs, it might be acceptable to trust the ToS/DS field marking performed by user applications and end devices. In many customer-managed and most if not all provider-managed IPsec VPNs, however, it is necessary to reclassify and re-mark user packets on an IPsec VPN gateway. IPsec VPN gateways, therefore, often function as a QoS trust boundary between the customer network and the service provider network.

After packets have been classified and marked, and if the IPsec VPN is provisioned over a private service provider network, intermediate devices between IPsec VPN gateways can schedule (queue) packets without having to reclassify those packets.

Figure 7-56. Classification, Marking, and Scheduling of Packets in an IPsec VPN Provisioned over a Private Service Provider Network

Figure 7-57. Scheduling of Packets in an IPsec VPN Provisioned over the Public Internet

Figure 7-58. Information Available for the Classification of Packets on IPsec VPN Gateways

As you can see in Figure 7-58, if you want to classify and mark packets based on user packet layer information, such as TCP or UDP port, in normal operation you have to do it on the IPsec VPN gateway's ingress interface (prior to the user packets being encapsulated by IPsec).

In normal operation, classification on the egress interface of an IPsec VPN gateway can only be based on information in the outer header of IPsec packetsremember that IPsec encapsulated the user packet, and most user packet information is hidden.

In normal operation, therefore, classification of packets for queuing and scheduling mechanisms on the egress interface is based on fields in the outer IP header of IPsec packets.

Example 7-65 shows the configuration of a QoS policy in normal operation.

Highlighted lines 1, 2, 3, and 4 show the configuration of a sample Class-Based Weighted Fair Queuing (CBWFQ) policy called voice-data-policy and its application to egress (outside) interface serial 1/0 of an IPsec VPN gateway.

The specific QoS policy shown in Example 7-65 is used for illustrative purposes only and is not necessarily recommended for live deployments. QoS policy will vary according to the requirements of each particular IPsec VPN.

Hmm? What is going on here? Traffic matching the critical-data and real-time-traffic classes is definitely being sent over the IPsec VPN, but it is not being matched by the CBWFQ policy.

The answer is that because the CBWFQ policy is applied to the egress interface, traffic that would otherwise match the critical-data and real-time-traffic classes is already encapsulated by IPsec by the time it reaches the IPsec VPN's egress interface, and so it does not in fact match the critical-data and real-time-traffic classes. Instead, all (IPsec) traffic matches the class-default class.

So, the problem is that when user packets are encapsulated in IPsec, most information (including TCP and UDP port numbers) is unavailable for matching.

Figure 7-59 illustrates the effect of the qos pre-classify command.

In this example, a plain IPsec tunnel (without GRE) is being used, and so the qos pre-classify command is applied within the crypto map, as shown in Example 7-67. Note that only relevant configuration is shown.

After the qos pre-classify command has been configured, traffic matches the critical-data and real-time-traffic classes within the CBWFQ policy, as shown in the output of the show policy-map interface command in Example 7-68.

As you can see in highlighted lines 1 and 2, packets are now matching the critical-data and real-time-data classes and are marked and scheduled accordingly.

If you are using GRE tunnels to carry multiprotocol or multicast traffic, you must apply the qos pre-classify command within the crypto map and on the GRE tunnel interface, as shown in Example 7-69. Note that only relevant configuration is shown.

In highlighted lines 1 and 2, the qos pre-classify command is configured under the crypto map and tunnel interface respectively.

If you are using mGRE tunnels with DMVPN, you only need to apply the qos pre-classify command on the mGRE tunnel interface, as shown in Example 7-70. Note that only relevant configuration is shown.

The highlighted line shows where the qos re-classify command is configured under the mGRE tunnel interface.

Before finishing this section, it is worth noting that you cannot configure the qos pre-classify command in conjunction with legacy priority queuing (configured using the priority-list and priority-group command).

One feature of IPsec that you can implement in conjunction with both AH and ESP is protection against duplicate IPsec packets sent by an attacker. Protection against duplicate packets is known as replay protection and when implemented causes a receiving IPsec VPN gateway to just drop duplicate IPsec packets. Replay protection can have implications in an IPsec VPN where packet scheduling based on ToS or DS field values (such as IP Precedence or Differentiated Services Code Point [DSCP]) is implemented in the backbone network between IPsec VPN gateways.

IPsec uses unique packet sequence numbers to protect against replay attacks. Each packet associated with a particular SA is sent with a unique sequence number, and the sequence number increases by one every time an IPsec VPN gateway sends a packet for that IPsec SA. 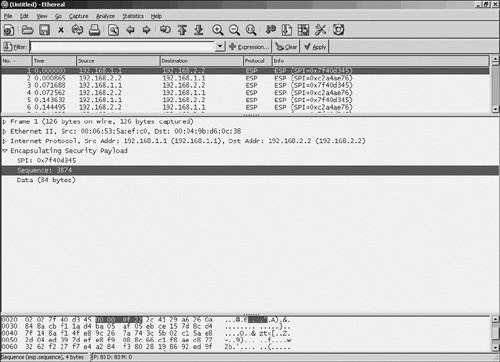 In the second highlighted line in Figure 7-60, you can see that the sequence number associated with this ESP packet is 3874.

Figure 7-61 illustrates the IPsec Replay Window. Note that a 10-packet replay window is used for illustrative purposes only.

Although Figure 7-61 shows a 10-packet replay window, an IPsec replay window must be at least 32 packets, and preferably 64 packets.

When it receives packet 3882, the New York gateway shifts the (10-packet) replay window to the right to encompass packet 3882.

IKEv2, on the other hand, specifies that identical traffic selectors may be used for separate IPsec SAs, each of which can be used, for example, for a separate QoS.

Cisco routers implement a replay window for IPsec SAs except for ESP when authentication is not specified.

Use the show crypto ipsec sa command to verify replay protection as shown in Examples 7-71 (IPsec SAs with authentication) and 7-72 (IPsec ESP SAs without authentication).

Highlighted lines 1 to 4 show that replay protection is not supported (replay detection support: N) for both inbound and outbound IPsec ESP SAs when authentication is not specified.

Other Considerations When Provisioning QoS for an IPsec VPN 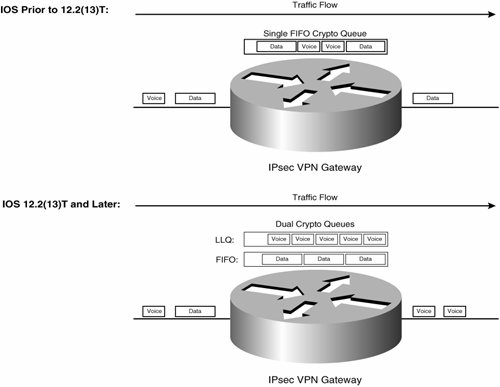