You can copy data from web pages into SQL using XSLT, which lets you pick and choose which parts of the web page to extract.

If the data in a web page is formatted consistently, you can write an XSLT stylesheet to convert it directly into SQL statements. You can target almost any kind of HTML web page, but it's easier if the source is well-formed XML (such as XHTML) and has a simple structure. Wikipedia (http://wikipedia.org) is ideal. To demonstrate this technique, let's start with the Wikipedia list of the top-grossing films worldwide (adjusted for inflation), shown in Figure 6-1.

Figure 6-1. Highest-grossing films according to Wikipedia 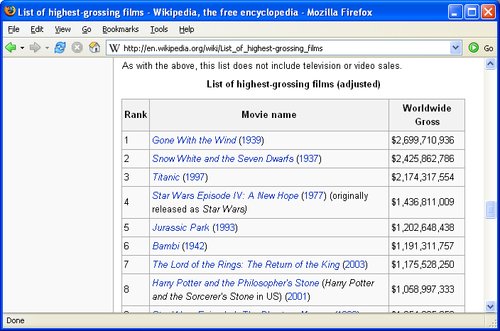 After you turn this web page into some INSERT statements, you'll be able to view the results with a SELECT statement:

The technique used here is based on XSLT processing. An XSLT stylesheet describes a transformation from an XML source to some other format. Often XSLT is used to translate one XML format into another XML format; here you will be using it to translate XML (specifically XHTML) into SQL.

You will need an XSLT processor and an XSLT stylesheet for this process. If you are on a Windows system you can use msxsl.exe, available as a free download (search for msxsl.exe at http://www.msdn.com and for MSXML, which provides the libraries that msxsl.exe depends on). If you are using Linux or a Mac, the xsltproc utility will do the same job. Also, Xalan from Apache (http://xalan.apache.org) is available for most platforms. You will have to write a custom translation for each page format. If you are processing several pages with the same structure you can reuse the sheet, but if the source format changes you will have to change the sheet to accommodate it.

To extract data from an XHTML document you might need to use a little trial and error. You need to look at the raw HTML from the target page and identify the tag or tags that contain the data you are looking for.

Look at the HTML from Wikipedia; this section is part of a much larger document (http://en.wikipedia.org/wiki/List_of_highest-grossing_films):

You must identify enough of the surrounding structure to uniquely identify the text that you need. In this document you can see that the data for each row is contained in a tr element. The XPath expression, htm:tr, will match all such elements.

Unfortunately, this document includes several other tables and tr elements, so you must be more discriminating. The one table that you are interested in is uniquely identified by its caption. You can refine your XPath expression to:

The square brackets introduce a condition on the match. You are still matching TR nodes, but now you are insisting that the parent of the TR is a table and that the table has a caption child with the specified content.

This expression will still match too many tr elements. The first TR element of the table contains the headings and you do not want that to match. You can refine your XPath to ensure that only TR nodes that have TD children are matched:

Having identified the elements that represent each row of your table you can create a template to match them. The content of the template will be an SQL statement with xsl:value-of elements in place of actual data values.

Here is the stylesheet. You can save the sheet as the file gross.xsl:

The file gross.xsl contains a single useful template. For every tr element in the document that matches the XPath expression, the template is activated. At each activation, the INSERT statement is generated and the xsl:value-of elements get instantiated with values calculated from the current node. The second template with match="text( )" is there to override the default behavior, which is to output all unmatched text content.

Notice the two xsl:value-of elements that return the title of the movie and the gross takings. The expression htm:td[2]/htm:i gives the text content of the i element contained in the second td element. This is the title of the movie. The gross figure is in the third TD element. The transformation removes the dollar signs and the commas using the translate function. This function maps corresponding characters in its second and third arguments; since the third argument is empty in this case, dollar signs and commas are removed.

The square brackets may contain either a condition or a number. When a number is given, as in htm:td[2], it is equivalent to htm:td[position( )=2].

Here is a sample of the output generated:

This example is intended for SQL Server; that's why there's a GO command to mark the end of each batch. Most other systems require a semicolon in place of the word GO.

The XSLT processor will take a page directly from the Web, and you can store the results in the file gross.sql before loading it into SQL Server. In this example, the stylesheet, gross.xsl, is in the current directory, but it can be in any directory or even in a remote URL. You can run the hack from a Windows command prompt as follows:

Notice that one of the films, Harry Potter and the Sorcerer's Stone, includes an apostrophe that has caused an error. We'll fix that in the next section. First, look at the equivalent Linux commands for sending data from a web page to MySQL (be sure to replace GO with a semicolon [;] in gross.xsl before you try to run this):

The preceding example uses the wget command to copy the web page to the filesystem and uses xsltproc to process the stylesheet (notice that the parameters are reversed compared to msxsl).

The unbalanced quote in the title "The Sorcerer's Stone" is causing the same problem here as it did with SQL Server.

You can take care of quotes using the Perl one-liner on Windows (type cleans up some of the messy Unicode you might get out of msxsl.exe):

On Linux, Unix, or Mac OS X, the command is:

You should use your command-line SQL utility [Hack #1] to run the command DELETE FROM film before you load grossQ.sql or you will end up with some duplicates from your previous attempt.

Pages from Wikipedia are valid XHTML, and that makes them particularly suitable for this technique. If your source document is not well formed the XSLT process will halt with an error.

You can clean up many badly formed web pages using the Tidy program from Dave Raggett (http://tidy.sourceforge.net). If you use this program with the - asxhtml and -numeric switches the output is suitable for XSLT processing.

You can use the Linux utility xmllint to get XPath expressions that describe the location of your data.

The Internet Movie Database (IMDb) has a similar list of top-grossing films at http://www.imdb.com/boxoffice/alltimegross?region=world-wide, and this presents more of a challenge.

You can try to run this through Tidy, but when you do you get a bunch of errors and warnings. You can ignore the warnings but you must take care of the errors:

The error on line 110 is caused by an improperly nested tag. Tidy can cope with many common XML errors, but not that one. The quick and dirty solution to the unrecognized or badly nested tag is simply to get rid of it and hope that you don't lose any important data. grep will do that, and you can follow that up with a more successful run of Tidy:

The Tidy program now gives even more warnings than before, but no errors, and gross3.htm now contains valid XML that you can process with XSLT. Instead of examining the file by hand, you can get xmllint to find the structures you need; see Hack #35, "Explore a Document Tree with the xmllint Shell," in XML Hacks by Michael Fitzgerald (O'Reilly), for more information on this:

You use the grep command to identify strings that you know to be in the document. In the preceding sequence, the string Potter crops up in several movie titles and the figure 968,657,891 appears as the box office takings for the first Potter film.

You can see that there are "Potter" titles in tr[4]/td[2]/a and tr[8]/td[2]/a, and in two other places. Each is in a nest of tables four deep. The figure 968,657,891 appears in the gross value for the first Potter film. That value crops up in TR[4]/td[3] and it is the tr[4] node that contains the film title. You can use this information to create your template in the XSL sheet. This sheet has much in common with the previous one.

This time we've not tried to be smart about the XPath expression, so this sheet will be more fragile with respect to trivial formatting changes made by IMDb. The match expression in the template is simply the pattern given by xmllint, but with the namespace htm: prepended to each element name. Save this in a file named imdb.xsl:

The translate function is doing precisely the same job as before, stripping out the dollar signs and the commas. There are line-end characters in the titles this time and the normalize-space function takes care of those. You need to use the [position( )>1] condition to skip the first tr in the list returned; the first row holds the headers. You can run the sheet using xsltproc:

You will have the same problem with single quotes in movie titles, and you can solve it the same way:

Finally, you can put your data into MySQL and look at the results: