The Prince looked down at the motionless form of Sleeping Beauty, wondering how her supple lips would feel against his own and contemplating whether or not an Altoid was strong enough to stand up against the kind of morning breath only a hundred years' nap could create.

In the previous chapter the following rules were given that indicate how we should process employment applications based on a person's age. The rules were:

Notice the problem at the boundaries—the "edges" of each class. The age "16" is included in two different equivalence classes (as are 18 and 55). The first rule says don't hire a 16-year-old. The second rule says a 16-year-old can be hired on a part-time basis.

Boundary value testing focuses on the boundaries simply because that is where so many defects hide. Experienced testers have encountered this situation many times. Inexperienced testers may have an intuitive feel that mistakes will occur most often at the boundaries. These defects can be in the requirements (as shown above) or in the code as shown below:

Of course, the mistake that programmers make is coding inequality tests improperly. Writing > (greater than) instead of ≥ (greater than or equal) is an example.

The most efficient way of finding such defects, either in the requirements or the code, is through inspection. Gilb and Graham's book, Software Inspection, is an excellent guide to this process. However, no matter how effective our inspections, we will want to test the code to verify its correctness.

Perhaps this is what our organization meant:

What about ages -3 and 101? Note that the requirements do not specify how these values should be treated. We could guess but "guessing the requirements" is not an acceptable practice.

The code that implements the corrected rules is:

Note that a point just above one boundary may be in another equivalence class. There is no reason to duplicate the test. The same may be true of the point just below the boundary.

Boundary value testing is most appropriate where the input is a continuous range of values. Returning again to the Goofy Mortgage Company, what are the interesting boundary values? For monthly income the boundaries are $1,000/month and $83,333/month (assuming the units to be US dollars).

Figure 4-1: Boundary values for a continuous range of inputs.

Because GMC will write a mortgage for one through five houses, zero or fewer houses is not a legitimate input nor is six or greater. These identify the boundaries for testing.

Figure 4-2: Boundary values for a discrete range of inputs.

Rarely will we have the time to create individual tests for every boundary value of every input value that enters our system. More often, we will create test cases that test a number of input fields simultaneously.

Plotting "monthly income" on the x-axis and "number of dwellings" on the y-axis shows the "locations" of the test data points. 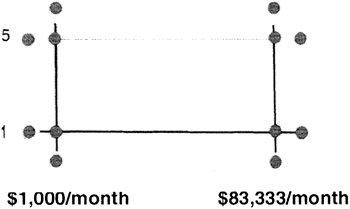 Note that four of the input combinations are on the boundaries while eight are just outside. Also note that the points outside always combine one valid value with one invalid value (just one unit lower or one unit higher).

Boundary value testing is applicable to the structure (length and character type) of input data as well as its value. Consider the following two examples:

Referring to the Trade Web page of the Brown & Donaldson Web site described in Appendix A, consider the Quantity field. Input to this field can be between one and four numeric characters (0,1, ..., 8,9). A set of boundary value test cases for the length attribute would be {0, 1, 4, 5} numeric characters.

Again, on the Trade page, consider the Quantity field, but this time for value rather than structure (length and character type). Whether the transaction is Buy or Sell, the minimum legitimate value is 1 so use {0, 1, 2} for boundary testing. The upper limit on this field's value is more complicated. If the transaction is Sell, what is the maximum number of shares that can be sold? It is the number currently owned. For this boundary use {sharesOwned-1, sharesOwned, sharesOwned+1}. If the transaction is Buy, the maximum value (number of shares to be purchased) is defined as

Boundary value testing can significantly reduce the number of test cases that must be created and executed. It is most suited to systems in which much of the input data takes on values within ranges or within sets.

Boundary value testing is equally applicable at the unit, integration, system, and acceptance test levels. All it requires are inputs that can be partitioned and boundaries that can be identified based on the system's requirements.

[1]There actually is no extra credit, so do it for fun.

[2]There actually is no extra credit, so do it for fun.

[3]There actually is no extra credit, so do it for fun.