It was from the primeval wellspring of an antediluvian passion that my story arises which, like the round earth flattened on a map, is but a linear projection of an otherwise periphrastic and polyphiloprogenitive, non-planar, non-didactic, self-inverting construction whose obscurantist geotropic liminality is beyond reasonable doubt.

Control flow testing is one of two white box testing techniques. This testing approach identifies the execution paths through a module of program code and then creates and executes test cases to cover those paths. The second technique, discussed in the next chapter, focuses on data flow.

Unfortunately, in any reasonably interesting module, attempting exhaustive testing of all control flow paths has a number of significant drawbacks.

Even though control flow testing has a number of drawbacks, it is still a vital tool in the tester's toolbox.

A junction point is a point at which control flows join together.

The following code example is represented by its associated flow graph: 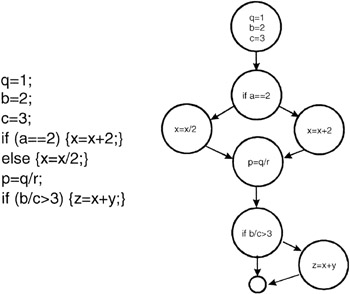 Even though statement coverage is the lowest level of coverage, even that may be difficult to achieve in practice. Often modules have code that is executed only in exceptional circumstances—low memory, full disk, unreadable files, lost connections, etc. Testers may find it difficult or even impossible to simulate these circumstances and thus code that deals with these problems will remain untested.

Holodeck is a tool that can simulate many of these exceptional situations. According to Holodeck's specification it "will allow you, the tester, to test software by observing the system calls that it makes and create test cases that you may use during software execution to modify the behavior of the application. Modifications might include manipulating the parameters sent to functions or changing the return values of functions within your software. In addition, you may also set error-codes and other system events. This set of possibilities allows you to emulate environments that your software might encounter - hence the name 'Holodeck.' Instead of needing to unplug your network connection, create a disk with bad sectors, corrupt packets on the network, or perform any outside or special manipulation of your machine, you can use Holodeck to emulate these problems. Faults can easily be placed into any software testing project that you are using with Holodeck."

Before beginning control flow testing, an appropriate level of coverage should be chosen.

No discussion on control flow testing would be complete without a presentation of structured testing, also known as basis path testing. Structured testing is based on the pioneering work of Tom McCabe. It uses an analysis of the topology of the control flow graph to identify test cases.

The structured testing process consists of the following steps: 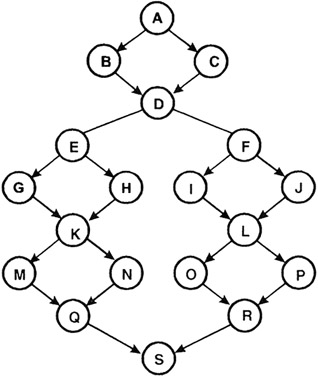 McCabe defines the Cyclomatic Complexity (C) of a graph as

Edges are the arrows, and nodes are the bubbles on the graph. The preceding graph has 24 edges and 19 nodes for a Cyclomatic Complexity of 24-19+2 = 7.

In some cases this computation can be simplified. If all decisions in the graph are binary (they have exactly two edges flowing out), and there are p binary decisions, then

Cyclomatic Complexity is exactly the minimum number of independent, nonlooping paths (called basis paths) that can, in linear combination, generate all possible paths through the module. In terms of a flow graph, each basis path traverses at least one edge that no other path does.

Because the set of basis paths covers all the edges and nodes of the control flow graph, satisfying this structured testing criteria automatically guarantees both branch and statement coverage.

A process for creating a set of basis paths is given by McCabe:

Thus, a set of basis paths for this graph are:

Structured testing calls for the creation of a test case for each of these paths. This set of test cases will guarantee both statement and branch coverage.

Note that multiple sets of basis paths can be created that are not necessarily unique. Each set, however, has the property that a set of test cases based on it will execute every statement and every branch.

Consider the following example from Brown & Donaldson. It is the code that determines whether B&D should buy or sell a particular stock. Unfortunately, the inner workings are a highly classified trade secret so the actual processing code has been removed and generic statements like s1; s2; etc. have substituted for them. The control flow statements have been left intact but their actual conditions have been removed and generic conditions like c1 and c2 have been put in their place. (You didn't think we'd really show you how to know whether to buy or sell stocks, did you?)

The following flow diagram corresponds to this Java code: 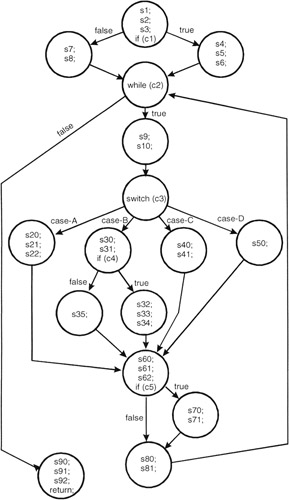 The cyclomatic complexity of this diagram is computed by

Let's remove the code and label each node for simplicity in describing the paths. 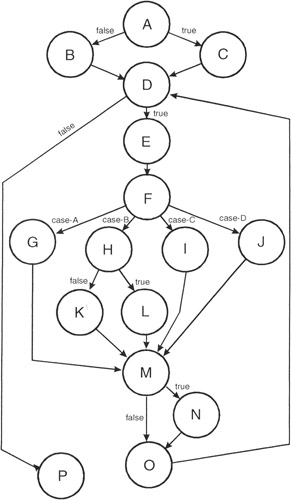 A set of eight basis paths is:

Remember that basis path sets are not unique; there can be multiple sets of basis paths for a graph.

This basis path set is now implemented as test cases. Choose values for the conditions that would sensitize each path and execute the tests.

Control flow testing is the cornerstone of unit testing. It should be used for all modules of code that cannot be tested sufficiently through reviews and inspections. Its limitations are that the tester must have sufficient programming skill to understand the code and its control flow. In addition, control flow testing can be very time consuming because of all the modules and basis paths that comprise a system.