I'd stumbled onto solving my first murder case, having found myself the only eyewitness, yet no matter how frantically I pleaded with John Law that the perp was right in front of them and the very dame they'd been grilling - the sultry but devious Miss Kitwinkle, who played the grieving patsy the way a concert pianist player plays a piano - the cops just kept smiling and stuffing crackers in my beak.

Decision tables are an excellent tool to capture certain kinds of system requirements and to document internal system design. They are used to record complex business rules that a system must implement. In addition, they can serve as a guide to creating test cases.

Decision tables are a vital tool in the tester's personal toolbox. Unfortunately, many analysts, designers, programmers, and testers are not familiar with this technique.

Decision tables represent complex business rules based on a set of conditions. The general form is:

Perhaps a concrete example will clarify the concepts. An auto insurance company gives discounts to drivers who are married and/or good students. Let's begin with the conditions. The following decision table has two conditions, each one of which takes on the values Yes or No.

Now for the actions. Each rule causes an action to "fire." Each rule may specify an action unique to that rule, or rules may share actions.

Decision tables may specify more than one action for each rule. Again, these rules may be unique or may be shared.

While the previous example uses simple binary conditions, conditions can be more complex.

In this situation choosing test cases is slightly more complex— each rule (vertical column) becomes a test case but values satisfying the conditions must be chosen. Choosing appropriate values we create the following test cases:

If the system under test has complex business rules, and if your business analysts or designers have not documented these rules in this form, testers should gather this information and represent it in decision table form. The reason is simple. Given the system behavior represented in this complete and compact form, test cases can be created directly from the decision table.

In testing, create at least one test case for each rule. If the rule's conditions are binary, a single test for each combination is probably sufficient. On the other hand, if a condition is a range of values, consider testing at both the low and high end of the range. In this way we merge the ideas of Boundary Value testing with Decision Table testing.

To create a test case table simply change the row and column headings:

Decision Table testing can be used whenever the system must implement complex business rules. Consider the following two examples:

Referring to the Trade Web page of the Brown & Donaldson Web site described in Appendix A, consider the rules associated with a Buy order.

Admittedly, the outcome is readily apparent. Only when a valid symbol, valid quantity, and sufficient funds are available should the Buy order be placed. This example was chosen to illustrate another concept.

Note also that Rule 2 and Rule 3 can be combined because whether Sufficient Funds are available does not affect the action.

While this is an excellent idea from a development standpoint because less code is written, it is dangerous from a testing standpoint. It is always possible that the table was collapsed incorrectly or the code was written improperly. The un-collapsed table should always be used as the basis for our test case design.

The following screen is from the Stateless University Registration System. It is used to enter new students into the system, to modify student information, and to delete students from the system. 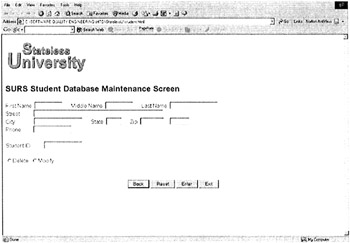 Rules 1 through 8 indicate that no data was entered about the student. Rules 1 through 4 indicate that no StudentID was entered for the student, thus no action is possible. Rules 5 through 8 indicate the StudentID was entered. In these cases creating a new Student is not proper. Rule 5 does not request either modification or deletion so neither is done. Rules 6 and 7 request one function and so they are performed. Note that Rule 8 indicates that both modification and deletion are to be performed so no action is taken.

Decision Table testing can be used whenever the system must implement complex business rules when these rules can be represented as a combination of conditions and when these conditions have discrete actions associated with them.