On the fourth day of his exploration of the Amazon, Byron climbed out of his inner tube, checked the latest news on his personal digital assistant (hereafter PDA) outfitted with wireless technology, and realized that the gnawing he felt in his stomach was not fear—no, he was not afraid, rather elated—nor was it tension—no, he was actually rather relaxed—so it was in all probability a parasite.

Equivalence class testing is a technique used to reduce the number of test cases to a manageable level while still maintaining reasonable test coverage. This simple technique is used intuitively by almost all testers, even though they may not be aware of it as a formal test design method. Many testers have logically deduced its usefulness, while others have discovered it simply because of lack of time to test more thoroughly.

Consider this situation. We are writing a module for a human resources system that decides how we should process employment applications based on a person's age. Our organization's rules are:

With these rules our organization would not have hired Doogie Houser, M.D. or Col. Harlan Sanders, one too young, the other too old.

Given this implementation, the fact that any set of tests passes tells us nothing about the next test we could execute. It may pass; it may fail.

Luckily, programmers don't write code like this (at least not very often). A better programmer might write:

Given this typical implementation, it is clear that for the first requirement we don't have to test 0, 1, 2, ... 14, 15, and 16. Only one value needs to be tested. And which value? Any one within that range is just as good as any other one. The same is true for each of the other ranges. Ranges such as the ones described here are called equivalence classes. An equivalence class consists of a set of data that is treated the same by the module or that should produce the same result. Any data value within a class is equivalent, in terms of testing, to any other value. Specifically, we would expect that:

This approach assumes, of course, that a specification exists that defines the various equivalence classes to be tested. It also assumes that the programmer has not done something strange such as:

Now, are we ready to begin testing? Probably not. What about input values like 969, -42, FRED, and &$#!@? Should we create test cases for invalid input? The answer is, as any good consultant will tell you, "it depends." To understand this answer we need to examine an approach that came out of the object-oriented world called design-by-contract.

In law, a contract is a legally binding agreement between two (or more) parties that describes what each party promises to do or not do. Each of these promises is of benefit to the other.

In the design-by-contract approach, modules (called "methods" in the object-oriented paradigm, but "module" is a more generic term) are defined in terms of pre-conditions and post-conditions. Post-conditions define what a module promises to do (compute a value, open a file, print a report, update a database record, change the state of the system, etc.). Pre-conditions define what that module requires so that it can meet its post-conditions. For example, if we had a module called openFile, what does it promise to do? Open a file. What would legitimate preconditions of openFile be? First, the file must exist; second, we must provide the name (or other identifying information) of the file; third, the file must be "openable," that is, it cannot already be exclusively opened by another process; fourth, we must have access rights to the file; and so on. Pre-conditions and postconditions establish a contract between a module and others that invoke it.

Testing-by-contract is based on the design-by-contract philosophy. Its approach is to create test cases only for the situations in which the pre-conditions are met. For example, we would not test the openFile module when the file did not exist. The reason is simple. If the file does not exist, openFile does not promise to work. If there is no claim that it will work under a specific condition, there is no need to test under that condition.

At this point testers usually protest. Yes, they agree, the module does not claim to work in that case, but what if the preconditions are violated during production? What does the system do? Do we get a misspelled word on the screen or a smoking crater where our company used to be?

A different approach to design is defensive design. In this case the module is designed to accept any input. If the normal preconditions are met, the module will achieve its normal postconditions. If the normal pre-conditions are not met, the module will notify the caller by returning an error code or throwing an exception (depending on the programming language used). This notification is actually another one of the module's postconditions. Based on this approach we could define defensive testing: an approach that tests under both normal and abnormal pre-conditions.

How does this apply to equivalence class testing? Do we have to test with inputs like -42, FRED, and &$#!@? If we are using design-by-contract and testing-by-contract the answer is No. If we are using defensive design and thus defensive testing, the answer is Yes. Ask your designers which approach they are using. If they answer either "contract" or "defensive," you know what style of testing to use. If they answer "Huh?" that means they are not thinking about how modules interface. They are not thinking about pre-condition and post-condition contracts. You should expect integration testing to be a prime source of defects that will be more complex and take more time than anticipated.

If an input is a continuous range of values, then there is typically one class of valid values and two classes of invalid values, one below the valid class and one above it. Consider the Goofy Mortgage Company (GMC). They will write mortgages for people with incomes between $1,000/month and $83,333/month. Anything below $1,000/month you don't qualify. Anything over $83,333/month you don't need GMC, just pay cash. 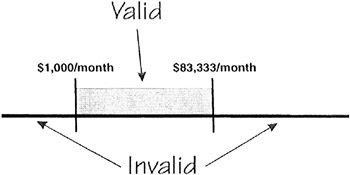 If an input condition takes on discrete values within a range of permissible values, there are typically one valid and two invalid classes. GMC will write a single mortgage for one through five houses. (Remember, it's Goofy.) Zero or fewer houses is not a legitimate input, nor is six or greater. Neither are fractional or decimal values such as 2 1/2 or 3.14159. 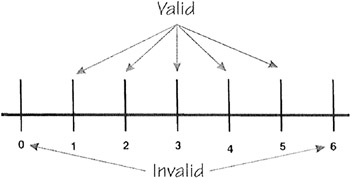 For a valid input we might choose two houses. Invalids could be -2 and 8.

For a valid input we must use "person." For an invalid we could choose "corporation" or "trust" or any other random text string. How many invalid cases should we create? We must have at least one; we may choose additional tests for additional warm and fuzzy feelings. 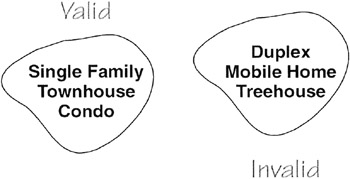 For valid input we must choose from "Condominium," "Townhouse," or "Single Family." While the rule says choose one test case from the valid equivalence class, a more comprehensive approach would be to create test cases for each entry in the valid class. That makes sense when the list of valid values is small. But, if this were a list of the fifty states, the District of Columbia, and the various territories of the United States, would you test every one of them? What if the list were every country in the world? The correct answer, of course, depends on the risk to the organization if, as testers, we miss something that is vital.

Now, rarely will we have the time to create individual tests for every separate equivalence class of every input value that enters our system. More often, we will create test cases that test a number of input fields simultaneously. For example, we might create a single test case with the following combination of inputs:

Each of these data values is in the valid range, so we would expect the system to perform correctly and for the test case to report Pass.

It is tempting to use the same approach for invalid values.

In many cases, errors in one input field may cancel out or mask errors in another field so the system accepts the data as valid. A better approach is to test one invalid value at a time to verify the system detects it correctly.

For additional warm and fuzzy feelings, the inputs (both valid and invalid) could be varied.

Another approach to using equivalence classes is to examine the outputs rather than the inputs. Divide the outputs into equivalence classes, then determine what input values would cause those outputs. This has the advantage of guiding the tester to examine, and thus test, every different kind of output. But this approach can be deceiving. In the previous example, for the human resources system, one of the system outputs was NO, that is, Don't Hire. A cursory view of the inputs that should cause this output would yield {0, 1, ..., 14, 15}. Note that this is not the complete set. In addition {55, 56, ..., 98, 99} should also cause the NO output. It's important to make sure that all potential outputs can be generated, but don't be fooled into choosing equivalence class data that omits important inputs.

Referring to the Trade Web page of the Brown & Donaldson Web site described in Appendix A, consider the Order Type field. The designer has chosen to implement the decision to Buy or Sell through radio buttons. This is a good design choice because it reduces the number of test cases the tester must create. Had this been implemented as a text field in which the user entered "Buy" or "Sell" the tester would have partitioned the valid inputs as {Buy, Sell} and the invalids as {Trade, Punt, ...}. What about "buy", "bUy", "BUY"? Are these valid or invalid entries? The tester would have to refer back to the requirements to determine their status.

With the radio button implementation no invalid choices exist, so none need to be tested. Only the valid inputs {Buy, Sell} need to be exercised.

On the Trade page the user enters a ticker Symbol indicating the stock to buy or sell. The valid symbols are {A, AA, AABC, AAC, ..., ZOLT, ZOMX, ZONA, ZRAN). The invalid symbols are any combination of characters not included in the valid list. A set of valid inputs could be {A, AL, ABE, ACES, AKZOY) while a set of invalids could be {C, AF, BOB, CLUBS, AKZAM, 42, @#$%).

Rarely will we create separate sets of test cases for each input. Generally it is more efficient to test multiple inputs simultaneously within tests. For example, the following tests combine Buy/Sell, Symbol, and Quantity.

Equivalence class testing can significantly reduce the number of test cases that must be created and executed. It is most suited to systems in which much of the input data takes on values within ranges or within sets. It makes the assumption that data in the same equivalence class is, in fact, processed in the same way by the system. The simplest way to validate this assumption is to ask the programmer about their implementation.

Equivalence class testing is equally applicable at the unit, integration, system, and acceptance test levels. All it requires are inputs or outputs that can be partitioned based on the system's requirements.