The first major component of any natural pose is balance. If a pose is out of balance, the character will appear as if it's about to tip over. For the purposes of posing, the body is a system of joints that is constantly trying to stay in balance. Each bone acts as a tiny lever that distributes the weight of the body through the spine to the hips, then down through the legs to the ground. A pose even slightly out of balance will be seen by the audience as "wrong."

The second main component of a natural pose is anatomical correctness. Each joint in the body has limited motion, and keeping the joints within their natural limits keeps the pose looking natural. If part of the body is out of place, the audience will pick up on it and the character will seem "wrong." Of course, there are exceptions to this rule, such as cartoon characters that stretch their joints beyond realistic limits.

Posing the Hips and Torso

In the human body, the hips support the weight of the upper body and distribute it through the legs to the ground. They're the place to start when creating a balanced pose. If a character picks up an object, for example, the object's weight will need to be balanced by the rest of the bodyusually by adjusting the hips.

Joints need to remain within their natural limits if you're posing naturalistic characters.

The hips are the foundation of any pose your character takes. As we have seen, adjusting the hips changes the body's center of balance. Any change to the hips will throw the character off balance and initiate an action. In animation, most motions start with the hips because most motions begin with a change in the character's balance.

The hips are also part of the torso, which contains most of the mass of the body. Balance is about weight distribution, so balancing the massive torso goes a long way toward balancing the entire body. To balance the torso, you'll need to adjust the spine and shoulders in concert with the hips to keep everything in line. A simple example of this would be a standing pose. In a relaxed stance, the body usually rests on one leg, not both. If you've ever watched people waiting in a long line, you'll see that people constantly shift their weight from one foot to another as they wait. Rarely do they place their weight equally on both feet, except when standing at attention. This means that even when posing a character that is just standing there, you still need to pay attention to the character's balance.

Rarely does a person stand on both feet. Placing the weight on one foot creates a more natural pose.

This pose is unbalanced. The character's upper body puts his weight too far forward, which makes him unstable.

If you move the hips back, the weight of the character becomes centered over the feet, stabilizing the pose.

Lifting the additional weight affects the balance again. The hips must move even further back to balance the load.

When a person rests on one leg, it throws the whole torso off center. The simplest way to think about this is that when the weight is on one leg, the free leg pulls the hip down and out of balance. To compensate, the body must curve the spine, which forces the shoulders in the opposite direction to maintain balance.

Almost every pose starts with hip placement; the second step is to counterbalance the hips using the spine and shoulders. Typically, this means rotating the shoulders in opposition to the hips, but there are many balanced poses that use other counterbalancing techniques.

When the hips are over one leg, the weight of the free leg pulls the hips out of center.

The legs and feet are the support system for the entire body. When a character stands, all of its weight is transmitted to the ground through the legs. The weight of the body causes the legs to bend slightly. When the weight is over one leg, the other leg can be a little bit straighter because it has less weight on it.

When the body is about to move, the legs will bend; they will then straighten as they move the body from one pose to another. When a character comes to a stop, the legs also act as shock absorbers, bending at the knee to absorb energy.

To maintain balance, the upper body must compensate by adjusting the spine so the weight remains centered over the weight-bearing leg.

The knees are another important part of the body to consider during posing. Knees bend and straighten, but the direction of the knee can also be critical to the pose. Knees almost always follow the angle of the foot.

Weight over the right leg causes the knee to bend. 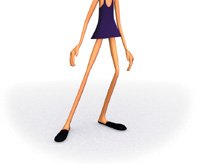 Drop the hips when a character shifts its weight.

Rarely do the feet point straight ahead (left); the more natural pose has the toes pointed outward (right). 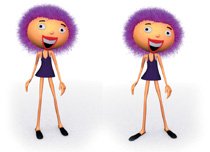 The knees naturally point in the same direction as the feet.

Actors who take to the stage for the first time are always very self-conscious about what to do with their hands. Animators often have the same problem.

The hand is a complex structure and is one of the most difficult parts of the body to pose. The best way to pose the hand is to understand a little bit about how it works. Generally, the index finger is the dominant digit of the hand, with the other fingers decreasing in dominance, down to the pinky. This dominance can be seen in a relaxed pose because the outer fingers tend to curl up more, while the index finger remains straighter.

This hand is not in a natural pose and looks very stiff.

A more natural pose has the fingers relaxed. Notice how the pinky curls in before the index finger.

The index finger is the dominant finger.

As the hand tightens into a fist, notice how the less dominant fingers curl first.

Hands can grasp, hold, and manipulate objects in a wide variety of ways. For a heavy object, the entire hand may be used, while delicate objects are manipulated with just the fingers. Achieving a good pose requires nothing more than looking at your own hands as they perform the same task.

An object such as a handle can be grasped simply by curling all the fingers around it.

More delicate manipulation is possible by using the fingertips.

Holding a pencil is another way the hand can manipulate an object.