The Language of Movement

In addition to understanding the forces that affect motion and how to express those forces in a 3D software package, the animator must understand the language of movement. Animation has a very specific vocabulary of motion that animators can draw from. This vocabulary includes such things as timing, arcs, anticipation, overshoot, secondary action, follow-through, overlap, and moving holds, among others. These motions are the raw material; good timing is the glue that holds it all together.

Timing affects every aspect of a film, and on many levels. First, the film is a specific length, anything from a 30-second commercial to a two-hour feature. Second, the cutting of the scenes within this time constraint affects the mood and pace of the film. Third, the acting and timing of the character's actions affect how each individual scene plays.

Think of your film as music. Both film and music rely intimately on time. Your film's scenes can be seen as verses, choruses, or movements. The individual notes of the instruments are the same as the individual actions of your characters. Each action, like each musical note, must be in the right place at the right time. And as with music, bad timing in animation sticks out like a sore thumb.

You must remember that the audience will usually be seeing your film for the first time. As the animator, you need to guide them and tell them exactly where to look at each point in the film. The audience perceives things best sequentially, so you should present your main actions that way, one at a time, within a smooth sequence of motions. A character stubs his toe, recoils, and then reacts. If the reaction is too quick, the audience won't have time to "read" it; the recoil acts as a bridge between the two main actions.

A character stubs his toe. He recoils, so the audience can see the force against the toe. The character then reacts. The timing between these actions will determine how well the scene reads.

Think of a Road Runner cartoon. When Wile E. Coyote steps out over the gorge, he takes a while to notice that he's suspended in midair. He'll typically react, then look directly at the camera with a pitiful expression. This one drawing can be held for almost a second. He may blink or his whiskers may twitch, but it is essentially a still pose. He then will zip off the screen in a few frames. This is a great example, because in the span of time that the pose is held, the audience comes to the same realization as the coyotehe's doomed. It also draws the audience's full attention to the coyote, so that when he does fall off screen, they see that clearly as well.

One of the most important lessons you can learn about timing, then, is to draw attention to what is about to move before it moves. An action reads only when the audience is fully focused on it. As the animator, you must guide the audience's eyes through the character's actions.

Objects tend to move along arcs. This is because an object is usually subject to multiple forces, all simultaneously acting upon the object. The exceptions are usually mechanical motions, which tend to be more linear.

With characters, arcs are also created by the natural mechanics of the body. Joints in the body move by rotating, and this rotation creates arcs.

The motion of an arm is dictated by the rotation of the joints, which trace out arcs. If the end of the arm traced out a straight line, it would appear unnatural. 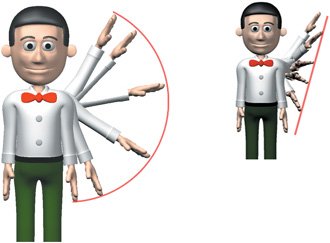 Other parts of the body also trace arcs. For example, a simple head turn traces an arc rather than a straight line.

When joints are animated using forward kinematics, they move by rotating. These rotations automatically move a character's joints along arcs. Such motion is anatomically correct and has a natural look, and it can be produced with little effort.

Limbs animated using inverse kinematics, however, need a little more attention. While inverse kinematics is a very helpful tool for locking the legs or arms to a specific location, it works through translation rather than rotation. This means that the software will use translation to move the limb between the keyframes, creating a straight line and also an unnatural motion. To correct for this, you may have to add a few extra keyframes or tweak the motion curves to get a more natural arc. 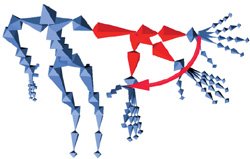 Joints animated with inverse kinematics will inbetween the object's starting and ending positions, tracing out a line rather than an arc. 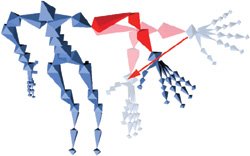 Adding an extra keyframe or adjusting the motion graphs can turn the line into a more natural arc. 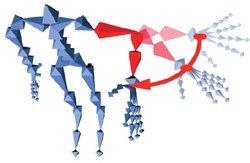 When animating, we also need to consider the effects of drag on an object. A force transmitted to an object does not affect all parts of the object equally. Imagine two sticks connected by a flexible joint. If you pulled one of the sticks straight down, the second stick would take a while to "get in line." This effect is called drag.

Another point to consider is the way a multijointed object will move. If an object has more than two joints, each joint will drag behind the one before it. A third joint added to our stick simply drags behind the second.

If you pull down on the first stick...

...the second stick must rotate to get into alignment with it.

Drag causes a delay before the two sticks line up. 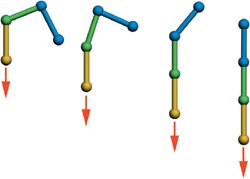 A dog's tail behaves exactly like our sticks: the end of the tail drags behind the base.

Much like the sticks, the body's skeleton is really just a collection of joints. Force applied to one joint of the skeleton takes time to reach the other joints.

Most objects tend to flex and bend as they move. Think of a rubber ball. If you apply a force to the top of it, the ball will compress or "squash." If you pull the ball from both ends, it will stretch.

The fact that objects can change shape when subjected to forces is helpful when animating. You can give a ball bouncing on the ground a "rubbery" feel by squashing it as it hits the ground and stretching it as it takes off.

This principle applies to character animation as well. Characters subjected to forces will change shape just as a ball does, but in a more complex way. Think of a gymnastwhen a character jumps in the air, she'll stretch as she takes off, and when she lands, she'll squash to absorb the force of landing. 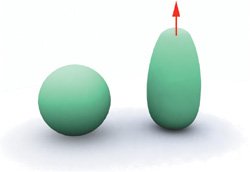 Squash and stretch in a character 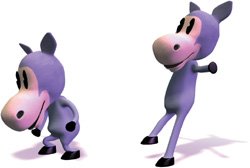 Squash and stretch are particularly important because people tend to perceive the outlines of objects first. When a character is squashed, the outline is compact. When the character stretches, the outline changes completely, giving the eye a lot of visual contrast.

In character animation, there are many levels of squash and stretch. In a naturalistic setting, a character may "squash" simply by bringing its limbs close to the body and "stretch" by extending the limbs. In a more cartoony environment, the squash and stretch may actually change the physical shape of the character, making it appear more rubbery.

As the character "squashes," it appears more compact.

As it "stretches," the character elongates, much as the rubber ball did. 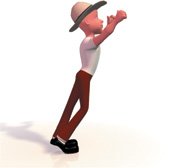 Extreme squash and stretch might not be totally realistic, but it can sure be fun to animate and watch.

When squashing and stretching, you must remember to maintain your character's volume. Consider a balloon filled with water. If you stretch it or squash it, the water in one part of the balloon simply moves to another area, but the volume doesn't change. The same principle applies to characters: No matter how squashed or distended the character, its volume should always remain the same. If the volume increases or decreases, it will appear as though the character is growing or shrinking.

This is not stretching; it is the character gaining weight. 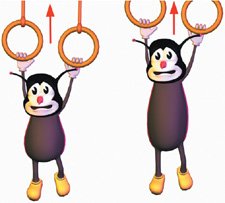 If one part of the body expands, another must contract to maintain volume. 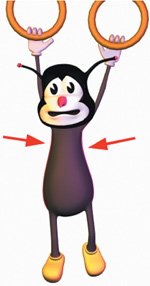 This flour sack is a good example of the way volume remains constant while shape can squash and stretch. 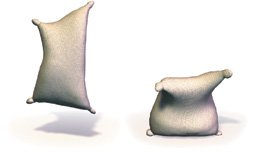 Anticipation is the body's natural way of gaining momentum before an action begins. When people jump, they swing their arms behind them, bend their knees, and actually move down slightly to get momentum before jumping up. In baseball, a batter will move the bat back before swinging it forward. You lean back before getting out of a chair. It's kind of like getting a head start on the action.

Before this character pitches the ball, he "winds up" and anticipates the throw.

Anticipation is a natural part of motion, and by exaggerating it, we can keep the audience's attention and achieve crisper timing. The human eye is naturally drawn to things that move. Moving an object in the opposite direction of its eventual motion draws attention to the object before it makes the important move. When it does move, the audience is already watching, so the motion can be much faster without confusing viewers.

You'll often need to animate an action that takes place very quickly, such as a "zip out." When you do, your audience needs to be fully aware of the action before it occurs, making anticipation of the action very important.

Before leaping off the box, the flour sack anticipates the jump by bending over.

As we've seen, anticipation is used to make an action's beginning more lifelike. At the tail end of the action, we have "overshoot." In many cases, a character's body will not come to a slow and perfect stop. Instead, it will overshoot the stopping point for a few frames and then settle into the pose. Like anticipation, it is a natural part of motion that can be exaggerated to the animator's advantage.

When a character throws out his arm to point his finger, his arm will anticipate the move before the action starts. If the motion is quick, the character's arm will naturally overshoot the pose so that the arm is absolutely straight. After a few frames, the arm will then settle into a more natural, relaxed pose. Overshoot can be used to give your character's actions more snap. If you're animating from pose to pose, you can overshoot a pose for a few frames and then settle in.

When this character throws out his arm, he overshoots the final pose and then settles in. This usually happens in just a few frames, but it gives the action more snap.