Acting and the Body

Every animator should know how the body moves as it reacts to stimuli. In acting, as in modeling, the body can be broken up into a few major parts. The head and face are important, as are the hands. The spine and its position also factor into how a character is perceived.

The head is the center of the intellect. The position of the head determines, to a large extent, how the audience perceives a character. Cocking the head to the side throws the body off center. Generally, this can indicate confusion, but it can also denote curiosity. When a character affirms something, his head may nod slightly; when a character disagrees, his head may shake slightly from side to side.

When the head is held up, exposing the throat, it indicates a more naive and childlike characterkids are short and they look up a lot. When the head is down, hiding the neck, the character is more authoritative and serious. Think of Jerry Lewis. When he was young and paired with Dean Martin in the 1950s, his character was that of an innocent and naive man. He kept his head high. When Jerry Lewis hosted the telethon, he had to be a lot more compelling. In this instance, he lowered his head.

Cocking the head to one side can indicate curiosity. Raised high, the head is more childlike. Lowering the head indicates authority.

One simple animation trick used to convey the notion of thought is to use anticipation: Always lead with the eyes or the head. The eyes move first, focusing the character's attention several frames before the head moves. The head should move next, followed a few frames later by the body. The eyes let the audience see that a character is thinking.

Shoulders often express mood or emotion. In some respects, their motions are related to those of the hands, but shoulders can express themselves outside of hand motions. The shrug is a good example of expression through shoulder motions. A character pushing its way through a crowd may lead with the shoulders, much as a linebacker does.

The big question from most animators is what to do with the hands. Some hand positions are universal in their meaning. Hands folded across the chest, for example, indicate that a character is closing itself off. Hands clasped behind the back are an indication of respect and lower status. A character with one hand on the hip might appear relaxed, whereas both hands on the hips make a character appear to be confrontational.

Where the hands are raised in relation to the body can also communicate a great deal about the character's demeanor. If the character raises his hands above the shoulders, it is a more intellectual gesture. Anxiety is a very intellectual emotion, and anxious people tend to hold their hands fairly high. Hands held lower are more primitive. A construction worker gesturing at a pretty girl will position his hands below his chest.

Hands above the head are more intellectual.

Hands near the chest are more emotive.

Posture is a very important indicator of a character's nature and demeanor. Your mom always told you to stand up straight for a reason. A proud character stands tall and arches its back to stick the chest out. Conversely, a depressed character tends to hunch over more. As the body ages, the spine stiffens, which makes it difficult for older characters to twist the spine and turn around.

The spine also figures prominently in status negotiations between characters. A character with high status stands taller and straighter. This goes pretty much for any character with higher self-worth. Such a character tends to keep its weight at the center of its body, near the hips. Characters with lower status subconsciously lower themselves by bending their spines and lowering their shoulders.

The Body and Chakras

When you're trying to understand a character, you need to understand where on the body the character's personality emanates. One way to look at this is with a bit of Eastern philosophy and the concept of a chakra.

The word "chakra" is Sanskrit for "wheel" or "disk" and signifies one of seven basic energy centers in the body. Each of these centers correlates to major nerve ganglia branching from the spinal column. The chakras also correlate to levels of consciousness, developmental stages of life, colors, sounds, body functions, and much, much more.

For animators, the best way to understand this concept is that the more primitive the emotion, the lower it sits on the spine. This little tidbit can be used as a guide to animating a character. The character's personality emanates most strongly from that point on the body. Primitive personalities, such as Rocky Balboa's, emanate from low on the body. The personalities of people who love others tend to emanate from the heart, or the middle chakra. The personality of an intellectual character like Woody Allen emanates from the head.

In general, the three lower chakras correspond with the main needs, such as survival, fertility, and free will, whereas the four higher chakras are related to a character's psychological makeup and define love, communication, and knowledge, as well as spirituality.

The seven chakras affect different areas of the body. 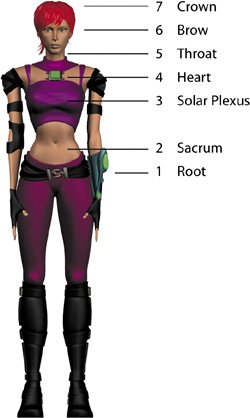