In addition to being physically correct, your poses must also be presented so that they convey the character's intent to the audience in a clear and aesthetically pleasing way. Remember that your 3D animated creation is almost always going to be shown on a 2D screen. The screen is your stage, and one of the best ways to pose characters for the camera is to study and reproduce methods pioneered by magicians, mimes, and stage actors over the centuries. Good silhouettes and a strong line of action will help present your characters to the camera properly.

Symmetry can also show up in facial animation.

Since the body is so symmetrical, it is very tempting to place it into symmetrical poses. Not only is this dull and boring, it's very unnatural. To keep your characters looking natural, you'll need to keep their poses and movement asymmetrical in almost every wayfrom the positions of the eyes, hands, and feet to their motions and actions. Symmetry has an odd habit of creeping in at the worst times.

Avoiding symmetry means watching out for what animators call "twins." A twin is a part of the body that mirrors another. Even minor details in a posesuch as both feet pointing in the same directioncan make a character look strange. 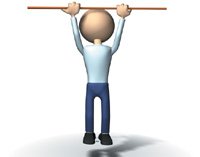 This pose breaks symmetry in a number of places, and is more interesting for it.

One of the fundamentals of good posing is presenting a strong silhouette to the audience or, in our case, the camera. Because the human eye is designed to notice contrast, it usually picks out an object's silhouette first and then fills in the rest of the detail. If an action is presented so that its outline is clear, the action will be clear as well.

A good silhouette will tell you what this character is doing...

Think of a magician pulling a rabbit out of a hat. He always pulls the rabbit out to either his right or his left. That way, even the person in the back row can understand what's going on. If the magician wants to hide something, he'll usually do it when his hands are passing in front of his body. The body, along with the motions, serves to conceal the action. The exact same principles apply to animation. Animators usually won't have to worry about performing sleight of hand, but they're very concerned about making actions readable. The silhouette is the key.

...he's about to pull something from his hat. If the silhouette reads well, so does the pose.

Once you have this image, ask yourself, "What is this character doing?" If your silhouette is clear, the action and the pose will read well.

A good example of silhouetting is this kick. The image reads well both as an image and in silhouette.

Turn the camera 90 degrees, however, and nothing reads. The angle from which you view your character is as important as the pose itself.

In addition to having a strong silhouette, a good pose should have a definite line of action. This is a strong line that you can follow from your character's feet to the tips of its fingers. This line not only makes your pose more effective, it also adds beauty to the pose. The human eye is naturally drawn to a good line.

For example, if your character is throwing a ball, arch the back and make the arm follow the same arc. This will give a much more pleasing line than if the arm just moves back. If you put the whole body into the throw, it will look more convincing.

This pose is weak because it has a weak line of action.

Getting the character's whole body into the action creates a stronger line of action as well as a stronger pose.

As the ball is tossed, the line of action reverses to add contrast to the pose. 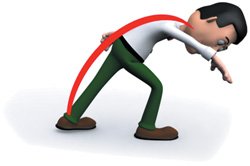 The line of action affects every part of a character's body. If a character is in a tug-of-war, he'll dig his heels into the ground and arch his back, putting every muscle he can into the effort. Even simple actions should follow a definite line. If a character is proud, he'll arch his back and throw out his chest. If he's tired, he'll slump over and have a completely different arc. Even subtle details, such as the placement of a finger or toe, can have a profound effect on a pose.

This tug-of-war pose shows a great line of action. 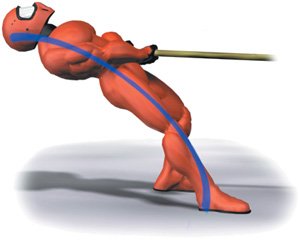 If a character is tired, he'll slump over in a different line of action.

The thumb breaks the line of action in the arm. Adjusting the thumb creates a stronger line, as does pointing the toe.