Plenty of instructors and schools can teach you how to act, and these techniques can be of great value to an animator. As you become more involved with creating characters, you can draw upon many techniques from the art of acting.

Acting, however, is fundamentally different from animation. Acting happens in real time, usually in front of an audience. As a result, actors need to learn how to deal with the here and now. If a fellow actor flubs a line, a good actor is quick enough to cover the faux pas flawlessly. And actors cannot go back and fix a couple of frames; they have to re-create the entire performance.

Animation is a much more solitary pursuit. Most of the time it's just you and the computer. Animating is also like acting in slow motionone frame at a timeand thus animators have the luxury of going back over a performance frame by frame until they consider it perfect.

The downside of going over the scene again and again is that there is a much higher chance of the scene appearing stale, forced, or over-thought. The only way to avoid this is to go with your gut when you first act out the scene and then to try to preserve that spontaneous vision throughout the process of animating and refining the scene. Some animators tend to thumb-nail their poses as they act out the scene, because it is much faster and more spontaneous than blocking it out in a 3D package.

According to the most popular realistic school of acting, actors must work from the inside outfrom motivation and emotion to physical action. If an actor consciously thinks about raising the eyebrows in surprise, for example, that action may appear forced. The action must come from an internal motivation, and once the emotion of surprise is achieved, the external expression (raising the eyebrows) will occur naturally.

The animator, on the other hand, works in exactly the opposite way. Animators must use externals to illustrate the internal, because the character being animated doesn't have internal emotionsit is simply a collection of bytes on the disk. The only way to communicate emotion to the audience is to change the external parts of the character to illustrate those emotions.

Thumbnailing poses on paper is a fast way to visualize a scene. 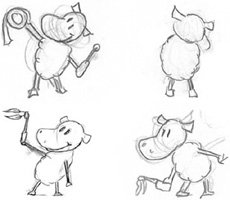