Many animators think the walk is one of the key parts of a character's personality. John Wayne's walk is completely different than Groucho Marx's, for example. Knowing your character means knowing your character's walk. However, there are plenty of other ways to get around. Characters may also run, skip, sneak, shuffle, and tiptoe, among many others.

With that in mind, let's analyze a few other types of locomotion.

A run is more than just a fast and highly exaggerated walk. Instead of continuous falling, it's best to view a run as continuous leaping, with the body tending to lean forward a lot more. In a walk, one foot is always on the ground; in a run, there are times when both feet are airborne. The stride length also increases, making this distance longer than the feet could normally reach in a walk.

The timing of a run is faster than that of a walk, and can get down to a few frames per step. If you're animating an extremely fast run, motion blur is absolutely required to keep the feet and legs from strobing. Take a look at a running character and note the differences between a walk and a run.

This figure illustrates the "contact position." Notice that the body leans forward and the legs are farther apart than they are during a walk.

After contact is made, the forward leg absorbs the shock of the body at the "recoil position." As is the case in walking, this point is the lowest position in the cycle. Because the body is moving faster, momentum is increased, causing the bent leg to be even more exaggerated.

This figure illustrates a position similar to the "passing position" because it is halfway through the step. At this point in the cycle, the grounded foot pushes the body upward.

The body is now airborne and is at the highest point in the cycle.

The body lands and the next step starts. As in the walk, the second half of the cycle should be a mirror of the first.

Another gait that is completely different from walking is the skip. In a skip, the character takes off and lands on the same leg, then switches legs for the next step. Even though the foot pattern is changed, the concepts of weight and balance do not. The character's hips, shoulders, and spine will all move in concert to keep the skeleton in balance.

This skip, animated by Angie Jones, shows the basic foot and body movements. The skip starts much like the walk, with the feet apart. A skip happens primarily on the toes, however.

As in the walk, the weight is transferred to the forward foot (or in this case, the forward toe).

The foot pushes off, sending the character into a small leap or hop. The opposite foot moves forward as the hips rotate. 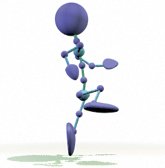 In the middle of the leap, the back leg moves forward slightly. The forward leg remains high and tucks under the body. 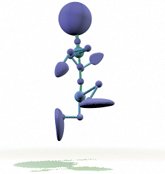 The character lands, but on the rear foot, with the forward foot staying high. 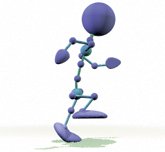 The forward foot touches down and the cycle repeats as a mirror of the first step.

Another favorite walk is the standard sneak. If you analyze it, this is just a variation of the basic walk, but the character is walking on his toes. It is a good example of how the basic walk can be modified to show character and mood. The main goal of a sneak is to walk quietly.

This sneak, animated by Angie Jones, starts much like the standard walk, but with the character on his toes. This makes the character slightly off center, so he extends his arms to regain balance.

The recoil position. Notice how the feet stay very close to the ground to help maintain balance.

The passing position. In the sneak, the planted leg does not extend nearly as much as in the walk.

Before the passing leg touches down, the character leans over at the waist to help maintain balance.

The cycle is finished and ready for the next leg.