Qt is designed to be pleasant and intuitive to hand-code, and it is perfectly possible to develop Qt applications purely by writing C++ source code. Qt Designer expands the options available to programmers, allowing them to combine visually designed forms with their source code.

In this section, we will use Qt Designer to create the Go-to-Cell dialog shown in Figure 2.4. Whether we do it in code or in Qt Designer, creating a dialog always involves the same fundamental steps:

To launch Qt Designer, click Qt 3.2.x|Qt Designer in the Start menu on Windows, type designer on the command line on Unix, or double-click designer in the Mac OS X Finder. When Qt Designer starts, it will pop up a list of templates. Click the "Dialog" template, then click OK. You should now have a window called "Form1". 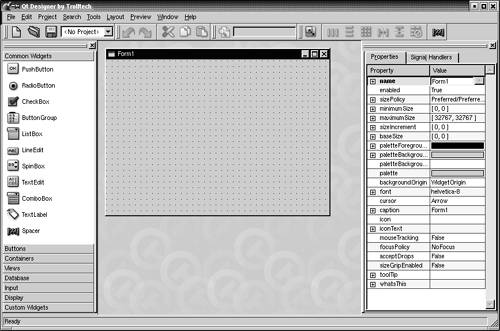 The first step is to create the child widgets and place them on the form. Create one text label, one line editor, one (horizontal) spacer, and two push buttons. For each item, click its name or icon in the "toolbox" at the left of Qt Designer's main window and then click the form roughly where the item should go. Now drag the bottom of the form up to make it shorter. This should produce a form that is similar to Figure 2.6. Don't spend too much time positioning the items on the form; Qt's layout managers will lay them out precisely later on.

Figure 2.6. The form with some widgets

The spacer item is shown in Qt Designer as a blue spring. It is invisible in the final form.

Set each widget's properties using the property editor on the right of Qt Designer's main window:

All the widgets look fine now, except the text label, which shows &Cell Location. Click Tools|Set Buddy. Click the label and drag the rubber band to the line editor, then release. The label should now show Cell Location and have the line editor as its buddy. You can verify this by checking that the label's buddy property is set to "lineEdit".

Figure 2.7. The form with properties set

The next step is to lay out the widgets on the form:

The red lines that appear on the form show the layouts that have been created. They never appear when the form is run.

Figure 2.8. The form with the layouts

Now click Tools|Tab Order. A number in a blue circle will appear next to every widget that can accept focus. Click each widget in turn in the order you want them to accept focus, then press Esc.

Now that the form has been designed, we are ready to make it functional by setting up some signalslot connections and by implementing some custom slots. Click Edit|Connections to invoke the connection editor.

We need to establish three connections. To create a connection, click New and set the Sender, Signal, Receiver, and Slot fields using the drop-down comboboxes.

To preview the dialog, click the Preview|Preview Form menu option. Check the tab order by pressing Tab repeatedly. Press Alt+C to move the focus to the line editor. Click Cancel to close the dialog.

Save the dialog as gotocelldialog.ui in a directory called gotocell, and create a main.cpp file in the same directory using a plain text editor:

One of the beauties of using Qt Designer is that it allows programmers great freedom to modify their form designs without disturbing their source code. When you develop a form purely by writing C++ code, changes to the design can be quite time-consuming. With Qt Designer, no time is lost since uic simply regenerates the source code for any forms that have changed.

If you run the program now, the dialog will work, but it doesn't function exactly as we want:

We must write some code to solve these problems.

Double-click the background of the form to invoke Qt Designer's code editor. In the editor window, enter the following code:

The init() function is automatically called at the end of the form's constructor (generated by uic). We set up a validator to restrict the range of the input. Qt provides three built-in validator classes: QIntValidator, QDoubleValidator, and QRegExpValidator. Here we use a QRegExpValidator with the regular expression "[A-Za-z][1-9][0-9]{0,2}", which means: Allow one upper or lower-case letter, followed by one digit in the range 1 to 9, followed by up to two digits each in the range 0 to 9. (For an introduction to regular expressions, see the QRegExp class documentation.)

The enableOkButton() slot enables or disables the OK button, according to whether the line edit contains a valid cell location. QLineEdit::hasAcceptableInput() uses the validator we set in the init() function.

After typing the code, save the dialog again. This will effectively save two files: the user interface file gotocelldialog.ui, and the C++ source file gotocelldialog.ui.h. Make the application once more and run it again. Type "A12" in the line edit, and notice that the OK button becomes enabled. Try typing some random text to see how the validator does its job. Click Cancel to close the dialog.

In this example, we edited the dialog in Qt Designer, then we added some code using Qt Designer's code editor. The dialog's user interface is saved in a .ui file (an XML-based file format), while the code is saved in a .ui.h file (a C++ source file). This split is very convenient for developers who want to edit the .ui.h file in their favorite text editor.

An alternative to the .ui.h approach is to create a .ui file with Qt Designer as usual, then create an additional class that inherits the uic-generated class and adds the extra functionality there. For example, for the Go-to-Cell dialog, this would mean creating a GoToCellDialogImpl class that inherits GoToCellDialog and that implements what's missing. It is straightforward to convert the .ui.h code to use this approach. The result is this header file:

And this source file:

The uic tool provides command-line options to simplify the creation of subclasses based on forms created with Qt Designer. Use subdecl to generate a skeleton header file, and use subimpl to generate the matching implementation file.

In this book, we use the .ui.h approach since this is the most common practice, and since it is easy to convert .ui.h files into subclasses. You might want to read the "Designer Approach" chapter in Qt Designer's manual for a technical appreciation of the differences between subclassing and using .ui.h files. Another chapter in the manual, "Creating Dialogs", demonstrates how to use Qt Designer's Members tab to declare member variables in uic- generated classes.