Quadrupedal reptiles, such as lizards and crocodiles, tend to keep their stomachs very close to the ground, with the legs splayed out to the side. With few exceptions, most four-legged reptiles have the same awkward position. This keeps the reptile's center of gravity quite low, making it more difficult to raise the body off the ground. In contrast, the legs of quadrupedal mammals are directly underneath the body, which allows the legs to carry all of the animal's weight and is more efficient.

A reptilian walk is similar to a mammalian walk in that the front and back legs move in opposition. The reptile's low center of gravity, however, forces the body to work more. As it walks, a reptile bends its torso into a curve to help push the feet along. Despite this awkward motion, some reptiles are capable of traveling at moderate speeds. Crocodilians raise their bodies off the ground and make short, fast rushes. Short-bodied lizards also can move fast for short distances. In fact, some lizards can lift their front legs off the ground when running. Longer-bodied lizards have greater difficulty in raising their bodies, because they have short legs. This forces their bodies to move more like snakes do. (If you remove a lizard's legs completely, the result is a snake.)

The legs of crocodiles, as well as those of lizards and other reptiles, splay out to the side. 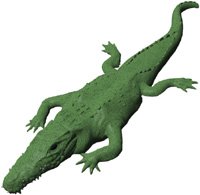 In a reptilian walk, the reptile's low center of gravity forces the spine and torso to bend much more than a mammal's do.

Snakes move in a unique way, and to the casual observer, it seems almost magical that an animal with no legs can move so quickly and gracefully. Snakes travel best on surfaces with obstructions and some roughness. This gives their bellies something to grip. Snakes do not do very well on slippery surfaces.

If you put a snake on loose sand, you can see that every part of its belly touches the ground, and it flows along in a series of S curves. On the back of each curve you can see that the sand has been pushed up. The body pivots and pushes sideways against these piles and is propelled forward. They swim in water with the same motion.

Snakes have several different modes of locomotion. The method a snake uses depends on several factors, such as its size, the roughness of the surface, and the speed of travel. Typically, the snake finds a bump or rough spot on the surface and pushes against that with its body to move forward.

Serpentine locomotion uses the classic S curve and is the most common method of travel used by snakes. In lateral undulation, waves of sideways bending are propagated along the body from head to tail. The snake's muscles are activated sequentially along the body, relaxing and contracting to form an "S" shape. As the snake progresses, each point along its body follows the path established by the head and neck, like the cars of a train following the engine as it moves along the track.

Serpentine locomotion is the most common method of travel used by snakes. Each point of the body follows along the S-shaped path established by the head and neck, much like the cars of a train following the track.

Sidewinding is used by many snakes to crawl on smooth or slippery surfaces. It is similar to lateral undulation in the pattern of bending but differs in a few ways. First, the snake's body doesn't slide along the ground; instead, it lifts part of the body while firmly setting down other parts. This allows the snake to get a better grip.

Next, the parts of the body that are not firmly planted on the ground are lifted up, causing the body to roll along the ground from neck to tail, forming a characteristic track.

Finally, because the snake repeatedly lifts parts of the body, it moves diagonally relative to the tracks it forms on the ground.

The distance that the snake lifts its body off the ground is usually measured in fractions of an inch, which is practically negligible from the audience's viewpoint. For added effect, you can exaggerate this lift when animating this type of motion.

In sidewinding, the snake actually lifts parts of the body and sets them down again. 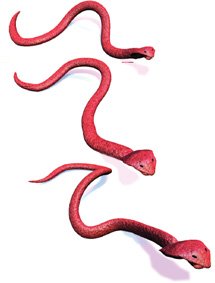 Sidewinding causes the snake to move diagonally relative to the "S" shape. 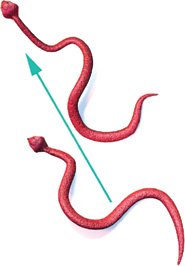 With concertina locomotion, the snake alternately folds the body back and forth like an accordion and then lifts and straightens the body to move forward. The front part of the body then comes to rest on the surface and the back part is lifted and pulled up into the accordion shape again. Concertina locomotion is used mostly in crawling through tunnels or narrow passages and in climbing.

Rectilinear locomotion lets the snake move straight ahead with its body stretched out, or perhaps along a wide arc with its body slightly curved. This type of motion is used primarily by large snakes, such as boa constrictors and pythons. In rectilinear locomotion, the snake pulls its belly scales forward and lifts them off the ground, then sets them down and pushes backward. Because the scales are aligned like a ratchet, this pulls the snake forward.

In concertina locomotion, the snake folds up its body like an accordion and then lifts and straightens out the body to move forward. 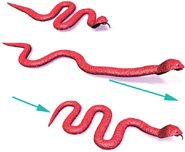 Rectilinear locomotion lets the snake move straight ahead with its body stretched out.

Dinosaurs are a unique case because we do not have any direct reference as to how they moved. There are no videotapes or films of these creatures in their natural habitat. Many scientists have tried to decipher dinosaur locomotion from the fossil record, but their conclusions are always open to debate. Observations of similar animals that are still living give us the best motion reference. A four-legged dinosaur, such as a triceratops, would most likely have moved like a large four-legged modern animal, such as a hippo or rhinoceros.

Bipedal dinosaurs, such as a T. rex, are a bit more difficult to pin down, because no creatures alive today have bodies similar to theirs. To figure out how these dinosaurs moved, scientists have tried to reconstruct their walks and runs using sophisticated physical models. Movies like Jurassic Park have popularized one particular brand of locomotion, which is based to some degree on the scientific research into this subject. This style seems to make sense and is the one we will use.

The crux of this style is that the back legs of a two-legged dinosaur are much like those of a bird. In this style, the dinosaur walks on its toes, with the body generally upright. The long tail acts as a counterbalance, which allows the upper body to pivot freely at the hips. As the dinosaur walks, the hips pivot much as a human's do, but the tail also rotates a bit to compensate.

As a bipedal dinosaur begins to run, the shoulders drop significantly as the body stretches out. This allows the tail to extend and counterbalance the upper body, which makes the locomotion process more efficient.

How did two-legged dinosaurs move? Since there are no dinosaurs alive today, we can only speculate. 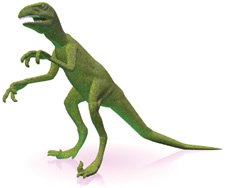 One theory is that dinosaurs moved somewhat like birds because they were the ancestors of birds. As a bipedal dinosaur begins to run, the shoulders drop significantly as the body stretches out to maintain balance.