Visibility is subtle because the things that can go wrong are so counterintuitive. In a single-threaded environment, if you write a value to a variable and later read that variable with no intervening writes, you can expect to get the same value back. This seems only natural. It may be hard to accept at first, but when the reads and writes occur in different threads, this is simply not the case. In general, there is no guarantee that the reading thread will see a value written by another thread on a timely basis, or even at all. In order to ensure visibility of memory writes across threads, you must use synchronization.

Listing 3.1. Sharing Variables without Synchronization. Don't Do this.

NoVisibility could loop forever because the value of ready might never become visible to the reader thread. Even more strangely, NoVisibility could print zero because the write to ready might be made visible to the reader thread before the write to number, a phenomenon known as reordering. There is no guarantee that operations in one thread will be performed in the order given by the program, as long as the reordering is not detectable from within that threadeven if the reordering is apparent to other threads.[1] When the main thread writes first to number and then to done without synchronization, the reader thread could see those writes happen in the opposite orderor not at all.

[1] This may seem like a broken design, but it is meant to allow JVMs to take full advantage of the performance of modern multiprocessor hardware. For example, in the absence of synchronization, the Java Memory Model permits the compiler to reorder operations and cache values in registers, and permits CPUs to reorder operations and cache values in processor-specific caches. For more details, see Chapter 16.

NoVisibility is about as simple as a concurrent program can gettwo threads and two shared variablesand yet it is still all too easy to come to the wrong conclusions about what it does or even whether it will terminate. Reasoning about insufficiently synchronized concurrent programs is prohibitively difficult.

This may all sound a little scary, and it should. Fortunately, there's an easy way to avoid these complex issues: always use the proper synchronization whenever data is shared across threads.

NoVisibility demonstrated one of the ways that insufficiently synchronized programs can cause surprising results: stale data. When the reader thread examines ready, it may see an out-of-date value. Unless synchronization is used every time a variable is accessed, it is possible to see a stale value for that variable. Worse, staleness is not all-or-nothing: a thread can see an up-to-date value of one variable but a stale value of another variable that was written first.

When food is stale, it is usually still ediblejust less enjoyable. But stale data can be more dangerous. While an out-of-date hit counter in a web application might not be so bad,[2] stale values can cause serious safety or liveness failures. In NoVisibility, stale values could cause it to print the wrong value or prevent the program from terminating. Things can get even more complicated with stale values of object references, such as the link pointers in a linked list implementation. Stale data can cause serious and confusing failures such as unexpected exceptions, corrupted data structures, inaccurate computations, and infinite loops.

[2] Reading data without synchronization is analogous to using the READ_UNCOMMITTED isolation level in a database, where you are willing to trade accuracy for performance. However, in the case of unsynchronized reads, you are trading away a greater degree of accuracy, since the visible value for a shared variable can be arbitrarily stale.

MutableInteger in Listing 3.2 is not thread-safe because the value field is accessed from both get and set without synchronization. Among other hazards, it is susceptible to stale values: if one thread calls set, other threads calling get may or may not see that update.

We can make MutableInteger tHRead safe by synchronizing the getter and setter as shown in SynchronizedInteger in Listing 3.3. Synchronizing only the setter would not be sufficient: threads calling get would still be able to see stale values.

When a thread reads a variable without synchronization, it may see a stale value, but at least it sees a value that was actually placed there by some thread rather than some random value. This safety guarantee is called out-of-thin-air safety.

Out-of-thin-air safety applies to all variables, with one exception: 64-bit numeric variables (double and long) that are not declared volatile (see Section 3.1.4). The Java Memory Model requires fetch and store operations to be atomic, but for nonvolatile long and double variables, the JVM is permitted to treat a 64-bit read or write as two separate 32-bit operations. If the reads and writes occur in different threads, it is therefore possible to read a nonvolatile long and get back the high 32 bits of one value and the low 32 bits of another.[3] Thus, even if you don't care about stale values, it is not safe to use shared mutable long and double variables in multithreaded programs unless they are declared volatile or guarded by a lock. 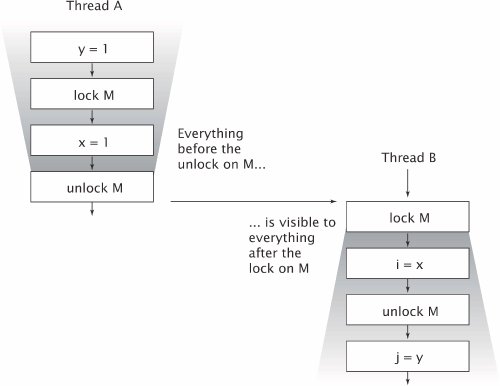 We can now give the other reason for the rule requiring all threads to synchronize on the same lock when accessing a shared mutable variableto guarantee that values written by one thread are made visible to other threads. Otherwise, if a thread reads a variable without holding the appropriate lock, it might see a stale value.

The Java language also provides an alternative, weaker form of synchronization, volatile variables, to ensure that updates to a variable are propagated predictably to other threads. When a field is declared volatile, the compiler and runtime are put on notice that this variable is shared and that operations on it should not be reordered with other memory operations. Volatile variables are not cached in registers or in caches where they are hidden from other processors, so a read of a volatile variable always returns the most recent write by any thread.

[4] This analogy is not exact; the memory visibility effects of SynchronizedInteger are actually slightly stronger than those of volatile variables. See Chapter 16.

[5] Volatile reads are only slightly more expensive than nonvolatile reads on most current processor architectures.

Listing 3.4 illustrates a typical use of volatile variables: checking a status flag to determine when to exit a loop. In this example, our anthropomorphized thread is trying to get to sleep by the time-honored method of counting sheep. For this example to work, the asleep flag must be volatile. Otherwise, the thread might not notice when asleep has been set by another thread.[6] We could instead have used locking to ensure visibility of changes to asleep, but that would have made the code more cumbersome.

[6] Debugging tip: For server applications, be sure to always specify the -server JVM command line switch when invoking the JVM, even for development and testing. The server JVM performs more optimization than the client JVM, such as hoisting variables out of a loop that are not modified in the loop; code that might appear to work in the development environment (client JVM) can break in the deployment environment (server JVM). For example, had we "forgotten" to declare the variable asleep as volatile in Listing 3.4, the server JVM could hoist the test out of the loop (turning it into an infinite loop), but the client JVM would not. An infinite loop that shows up in development is far less costly than one that only shows up in production.

Volatile variables are convenient, but they have limitations. The most common use for volatile variables is as a completion, interruption, or status flag, such as the asleep flag in Listing 3.4. Volatile variables can be used for other kinds of state information, but more care is required when attempting this. For example, the semantics of volatile are not strong enough to make the increment operation (count++) atomic, unless you can guarantee that the variable is written only from a single thread. (Atomic variables do provide atomic read-modify-write support and can often be used as "better volatile variables"; see Chapter 15.)

You can use volatile variables only when all the following criteria are met: