Figure 4-1 shows the block structure of CallManager. CallManager contains several signaling layers, each of which has distinct functions. For example, the Call Control Layer handles the call signaling that controls call setup, teardown, and call routing. 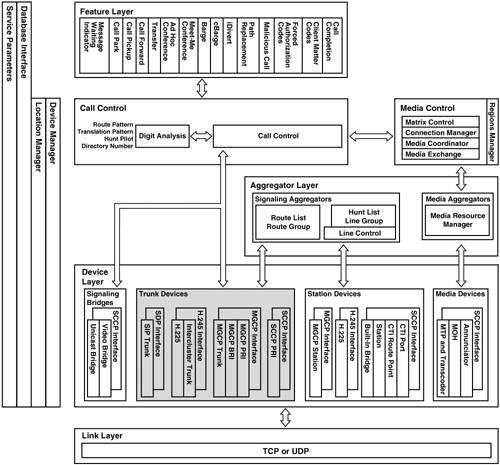 The software in the Media Control Layer coordinates all media connections that CallManager makes between devices. It can insert other media processing devices into a call and create appropriate streaming connections to those devices. As indicated in Chapter 1, "Cisco CallManager Architecture," in the Cisco VoIP solution, the actual media always streams directly between the end devices involved in a call. However, CallManager can also insert other media processing devices into a call, such as audio transcoding and conference bridge resources, depending on the media requirements needed for each call. Chapter 5, "Media Processing," contains more information about CallManager's handling of media devices.

Figure 4-1 indicates with shading the software layers and blocks within CallManager that this chapter describes. In particular, CallManager implements logic in the Protocol Layer to communicate with gateways via native VoIP signaling protocols such as H.225, MGCP, and SIP and logic in the Media Control Layer to handle H.245 media.

Figure 4-2 shows how gateway devices enable communication between CallManager and circuit-switched networks such as the PSTN. From a control point of view, Cisco VoIP gateways act very much like IP phones. They are VoIP endpoints that happen to mediate between the packet- and circuit-switched worlds.

To understand how a particular gateway interacts with CallManager, therefore, you need to concentrate mainly in two areas:

For connectivity between the gateway and the circuit-switched network, Cisco voice gateways support a range of traditional analog and digital interfaces.

The following section, "Overview of Circuit-Switched Interfaces," discusses the analog and digital protocols that traditional telephony networks use to communicate with Cisco voice gateways.

For connectivity between CallManager and the VoIP gateway, CallManager supports four protocols: