This chapter attempts to cover everything you ever wanted to know about media processing resources and media connection processing, but were afraid to ask. It might not answer all the questions you have on the subject, but it should at least discuss the salient points and provide insight into how media streams are controlled and handled by Cisco CallManager.

This chapter focuses on the Media Control Layer and is divided into two major sections: 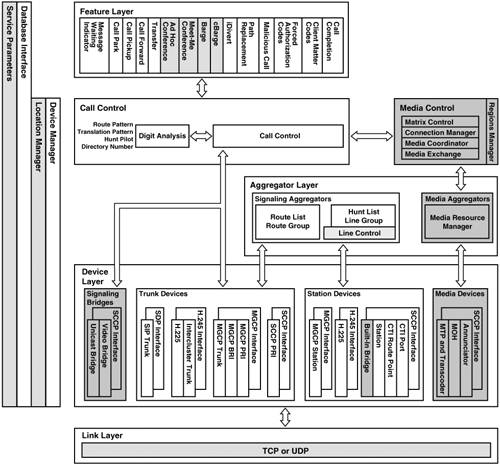 Figure 5-1 highlights the software layers and blocks within CallManager that are described in detail in this chapter. Other blocks are touched on lightly but are not highlighted because they are not covered in detail here.

In some cases, the media streaming connections are established before the call is connected. CallManager connects the media streams early such as when a call is destined for the public switched telephone network (PSTN) through a gateway. The caller then hears the progress tones and announcements from the PSTN telling them what happened to the call such as ringback tone, busy tone, "The number you have called is not a working number", or "All circuits are busy now. Please hang up."

If the endpoints in the call report video capabilities, CallManager checks the locations bandwidth and if it allows video, it automatically attempts to open a video channel between the endpoints for the call. Whether or not video is actually sent on that channel depends on the video mute setting of the endpoint devices involved and whether sufficient bandwidth is available.

The blocks highlighted in the Protocol/Aggregation layers of Figure 5-1 are those that control the media processing devices. They provide the device interface and handle all communication between the devices and CallManager.

The Media Resource Manager (MRM) is a software component in CallManager that handles all resource allocation and de-allocation. When call processing or a supplementary service determines that a media processing resource of a particular type is needed, the request is sent to the MRM. The MRM finds an available resource of the requested type, allocates the resource, and returns the resource identification information to the requestor.