Knowing how an object moves is important for any animator, but another essential skill is being able to create that motion within the computer. All 3D applications are slightly different, but they all use the same basic concepts to define and edit motions. These methods include setting keyframes to define the motion and editing the motions using interfaces such as the motion graph and the dope sheet.

A keyframe tells the computer that the ball will be in a certain place at a certain time. 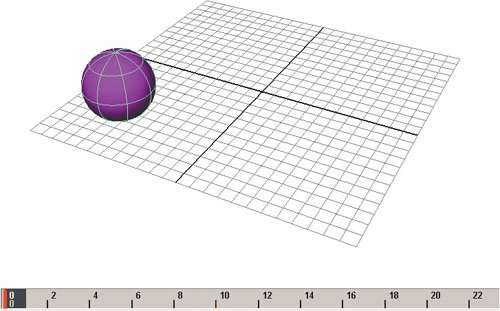 Keyframes are most typically used to define an object's position, but they can also be used to define just about any other attribute of an object, such as color, shape, or transparency. Facial animation, for example, requires key-framing an object's shape, but you also might need to keyframe the color of a character's cheeks if he blushes a lot.

If we add a new keyframe at a different time, we have the basics of motion. The ball has to move from point A to point B over the given period of time. 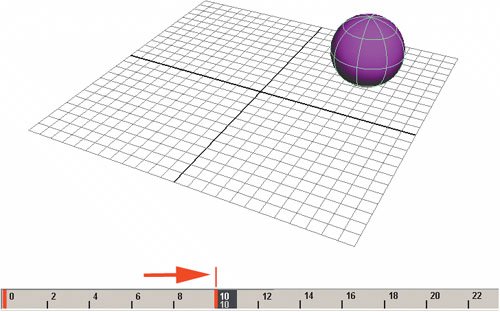 But how will the ball move between the two key-frames? We determine this by using a motion graph. 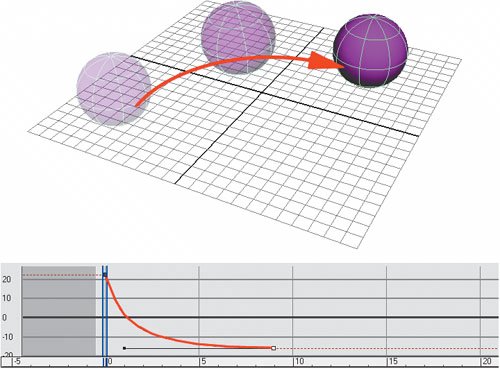 The frames between keyframe are called, appropriately enough, inbetweens. In a computer animation environment, the software calculates your inbetweens, but just as you do in traditional animation, you'll still need to tell it how to create those inbetweens. You can do this by using motion graphs, which use curves to tell the computer exactly how to move the object in between a set of keyframes. The graph itself can be anything from a straight line to a curve. Most motion graphs allow you to adjust the curve using Bézier-type handles, much like the tools used in modeling.

A straight line moves the object an equal amount between keyframes.

A curve can be used to slow-in and slow-out motions, creating accelerations and decelerations.

Curves can also be altered to create all sorts of custom inbetweens.

Motion graphs are an invaluable tool for the animator in diagnosing and fixing animation problems. Knowing how to read and manipulate motion graphs is an essential skill.

Every software package is different, but most motion graphs work in similar ways. Typically, the horizontal axis of the graph represents time, while the vertical axis represents the parameter being changed, such as position, rotation, scaling, and so on. These parameters are plotted graphically to tell you exactly how an object moves.

In many cases, the motion of the object will be broken down into X, Y, and Z components. While this may seem a little complicated at first, using separate curves will ultimately give you more control.

This curve has a slight "bump" at the middle key-frame, which can indicate a problem in the character's motion as well.

Smoothing out the curve will also smooth out the motion.

Another, simpler way to manage keyframes is by using a dope sheet. A dope sheet displays just the keyframes without the curves. Typically, the key-frames are displayed as blocks along a linear timeline, with the underlying curves hidden from view. Manipulating the keys changes the timing, but it does not affect the motion graphs; the inbetweens will follow the same curves. Since the keyframes are where you really define the motion, a simplified interface can make editing a scene much easier.

Another advantage of dope sheets is that they typically allow for higher-level editing of a character. An animator can select all the keyframes in a character's arm, for example, and reposition them to adjust the entire motion, rather than tweaking it a joint at a time.

A dope sheet shows the keyframes but not the curves.

Some dope sheets allow you to move blocks of animation very quickly, allowing you to speedily retime a scene.

In addition to motion graphs and dope sheets, there are additional methods of viewing, but not editing, your animation within a scene. One of these ways of visualizing motion is by observing an object's trajectory. Some packages allow you to graph the motion of an object within the viewports. This is an excellent way to check the object's motion through the actual scene.

Ghosting is derived from classic animation and allows you to overlay multiple "exposures" of an object's motion within a viewport, much in the same way that a traditional animator views layered drawings on a light table. Ghosting can be very effective in visualizing an object's motion, particularly the motions of complex characters.

Viewing an object's trajectory in the viewport can help you determine exactly how it's moving. 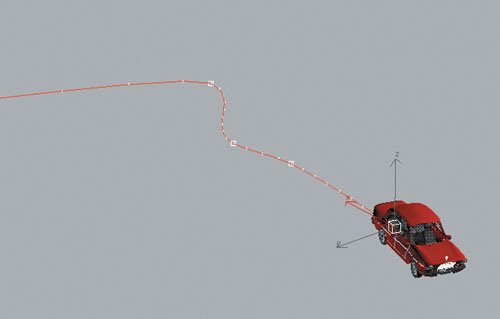 Ghosting is another way of viewing your character's motion. 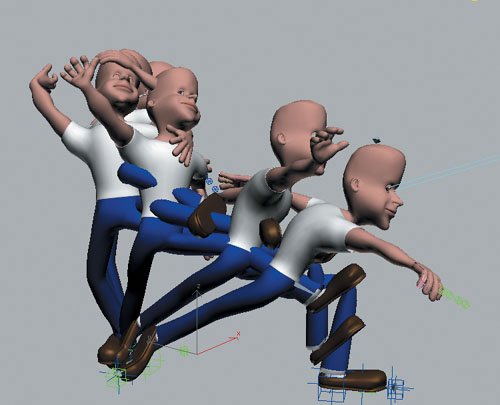