The skeleton of a four-legged mammal is similar to the skeleton of a human in that they both have four limbs, and those limbs contain the same number of bones, not counting hands, feet, or paws. The lengths and arrangements of the bones are where the differences lie.

Take a dog, for example. Whereas humans walk on their heels and toes, the dog walks only on its toes. The dog's "heel" is far above the ground, approximately where a human knee would be. The dog's "knee" is actually even higher up, as are the thighs and hips. The front legs are similar to our arms, but again, the dog walks on its fingers. Like the heel, the dog's "wrist" is far above the ground, with the elbow even higher.

Heavy-set animals, like the hippo, appear to have short, stubby legs, because the animal's skin hangs lower and obscures the upper part of the leg. A hippo's skeleton looks much like the skeleton of any other four-legged creature, except that the upper parts of the legs are hidden inside the body.

A dog walks on bones that correspond to a human's toes and fingers, with the wrist and ankle above the ground. 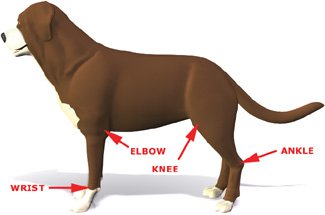 A hippo's elbows and knees are located near the belly, and the upper parts of its legs are hidden under its heavy skin.

A quadruped is any animal that has four legs, and quadruped skeletons are fairly easy to build. A quadruped skeleton is similar to a human skeleton: the animal has hips and shoulders connected via a spinal column, but the spine is aligned horizontally rather than vertically. Another factor to consider is that the bones of the limbs are not the same length as those of humans.

The center of gravity is usually located halfway between the hips and shoulders.

The hierarchy of a quadruped's body is usually constructed like that of a bipedal character, with the root of the hierarchy at the hips. Some people, however, like to rig the root a little farther forward, such as at the middle of the spine, which is closer to the animal's actual center of gravity. This decision is really a matter of taste, and either way will work fine.

A quadruped skeleton is similar to a human skeleton but is aligned horizontally rather than vertically. 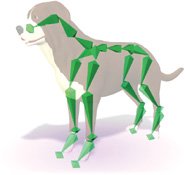 Inverse kinematic (IK) chains are the best way to build the legs.

Most four-legged mammals also have tails. A tail is easy to configure as a simple chain of linked bones connected to the hips. These are typically animated using forward kinematics.

To keep the animation simple, some animators like to tie the many bones of a tail to a single set of sliders that control the bones' rotations. This is as easy as linking the rotation of each bone to a slider. Moving one slider rotates many bones.

An animal's tail can be created by using a simple chain of bones.

Analysis of a Four-Legged Walk

Most four-legged mammals, particularly cats and dogs, walk with their legs moving in opposition, much as the hips and shoulders move in a human walk: when the right rear foot is forward, the left right foot is back. The creature's legs still rock back and forth at the hips, but the upper body motion is parallel to the ground rather than perpendicular to it. Whereas human shoulders rock back and forth on the vertical axis, a dog's "shoulders" rock back and forth on a horizontal axis as the front legs move back and forth. There are, however, a few exceptions. Giraffes, bears, and camels, to name a few, move their legs a side at a time, so that both the right rear leg and the right front leg move forward at the same time.

To maintain balance in a four-legged walk, the animal will usually walk with the front and rear legs slightly out of phase. This means when the front legs are passing each other, the rear legs are extended. This allows the animal to keep three of the four feet on the ground for a moment to create a stable, balanced platform. In the language of the horseman, a walk is considered a "four-beat" gait. This means that in a single walk cycle, each foot will hit the ground at a different time:

The legs then move through the step and the free feet strike the ground, repeating the first step.

In this step, the right rear foot is about to strike the ground. 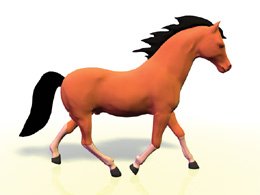 Halfway through the step, the free legs are moving forward. Notice how the front leg's joint causes a different bend in the leg than that of the rear. 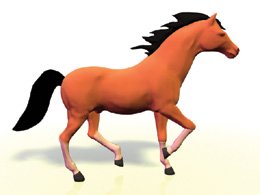 In addition to the walk, a four-legged animal can have several other gaits: the trot, the canter, and the gallop. The animal varies the timing and rhythm of its steps as it moves faster and faster. By the time the creature has reached full gallop, the front legs are in sync, going forward and back nearly in unison, with the back legs operating as a mirror to the front.

The trot is a two-beat gaitthe feet hit twice during one cycle. The animal's legs move in diagonal pairs, with the animal airborne for a few frames between each stride and diagonal pairs of feet hitting the ground at the same time. Another way to view this is that when the left front leg is fully back, the left rear leg is forward, and vice versa. The animal holds its head higher at a trot than it does at a walk, and the head remains almost still along the vertical axis.

In a trot, the feet hit in this order:

During a trot, the animal's legs move in diagonal pairs, with the animal airborne for a few frames between each stride.

The canter is an asymmetrical three-beat gait, and can start with either the right or left leg. If the animal is cantering on its "right lead" (usually when it's turning to the right), the sequence is as follows: left rear leg goes forward, right rear and left front legs move forward together, and finally the right front leg moves forward. At this last stage, after the animal uses the right front foot to push off for the next stride, there is a period when all four feet are off the ground. This gait also causes the animal's body to rock back and forth as it moves.

The canter is the precursor to the gallop. 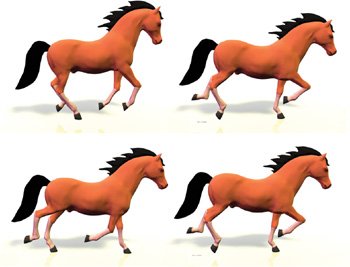 In the gallop, the animal extends to its full reach and speed. The animal is in the air longer because there's a bigger launch, and the footsteps fall faster. The step sequence of a gallop is very similar to that of a canteronly faster and more stretched out. In fact, it's stretched out so much that it becomes a four-beat gait. Like the canter, the gallop can start on either side.

A "right-lead" gallop would be as follows:

The gallop is a four-legged creature's equivalent of a run.

Another way to view a four-legged walk is in a more cartoony way. Think of the old vaudeville act in which two guys get into a tattered old horse suit. In this case, the horse literally walks like two people stitched together. You animate the walk like a double two-legged walk. This forces you to have different joint constraints and body construction.

You can also stylize a four-legged walk by adding personality. Try to understand the character and its mood as you animate a walk. The mechanics of four-legged walks may be somewhat complex, but you can take the walk beyond mechanics. Even if the resulting walk is not quite real, if the animation looks good, the audience will accept it.

The back legs on this dog are not realistic; they bend in the same way human legs do. Still, the cartoon nature of his design permits us to do this and get away with it.