The Pulsing Heart of ASP.NET AJAX

Microsoft ASP.NET AJAX Extensions is a framework that brings AJAX-style functionality to the ASP.NET 2.0 platform. Unlike other similar frameworks, it is designed to be part of ASP.NET and therefore seamlessly integrate with the existing platform and application model. ASP.NET AJAX will be fully integrated with the next release of Microsoft Visual Studio (codenamed “Orcas”), and along with LINQ it will be one of the pillars of the future ASP.NET platform.

Right from the start, you should think of ASP.NET AJAX Extensions as a native part of the ASP.NET platform and not just as a bolted-on and more or less unobtrusive external library. In the context of ASP.NET, the role of the AJAX subsystem is fairly clear and defined. It is the ingredient that spices up the whole platform and makes it a high-productivity platform for a new generation of Web applications. With AJAX aboard, you can finally write Web applications that work with Internet Explorer, Firefox, Navigator, and Safari browsers with ubiquitous reach and easy deployment.

ASP.NET AJAX Extensions brings enhancements on both the server and client side of the Web platform. It comes with a rich suite of components and controls to make AJAX coding easy and, more importantly, mostly transparent to ASP.NET developers.

There are two main approaches for building ASP.NET AJAX pages-server-centric and client-centric. In the server-centric model, you incrementally add AJAX-based user interface enrichment to new and existing applications. You keep the core part of your user interface and application logic on the server mostly written with Microsoft Visual Basic .NET or C#. At the same time, your applications benefit from the browser’s capabilities through JavaScript code. Your exposure to JavaScript, though, is minimal if not close to zero. Choosing a server-centric model allows ASP.NET developers to add a good deal of interactivity to Web applications with an extremely short learning curve.

The real power of AJAX, however, is harnessed when you can fully leverage JavaScript and the browser’s DOM, in a client-centric model. In this way, you can provide a significantly richer, more interactive, and more immersive user experience. You can build mash-ups and make the application react to user’s input in a way that closely resembles a desktop application.

In the client-centric model, you need good client-side programming skills. You keep control of everything, trigger server operations, grab results, and refresh the user interface. The bandwidth consumption is minimal, but your efforts are significant; and therefore, so is the likelihood of adding bugs and memory leaks.

In the server-centric model, everything is easier. A special component takes care of most of this burden and accomplishes tasks in a more reliable way at the cost of more bandwidth. In the server-centric model of AJAX, a component acts as the manager of the page and takes care of postbacks and page updates. You don’t write code for that; you just have to add a handful of new server controls to pages and tweak the configuration file.

This is currently the most common way to approach AJAX development in the industry. Virtually any AJAX frameworks out there expose an AJAX manager component and a bunch of settings. In this chapter we’ll take a look at the manager component and configuration file of ASP.NET AJAX Extensions pages.

When you create the project of an AJAX-enabled ASP.NET Web site, everything looks like a classic ASP.NET application at first glance. After a second look, though, you can see that the configuration file contains some changes in the form of new sections and new runtime components. In particular, the runtime components-made-to-measure HTTP modules and HTTP handlers-play a key role in the implementation of ASP.NET AJAX.

The web.config file is a text file written in accordance with a well-known XML schema. The standard schema file features a built-in number of sections and elements, but new sections can be added to configure custom services and components. As mentioned, ASP.NET AJAX Extensions 1.0 is just an extension to ASP.NET, and it can be easily seen as a new service that requires its own set of extensions to the configuration syntax.

As you can see, everything goes under the

As a result, you have no system scripts that are an explicit part of your application. To avoid that, you create a directory structure that roots under a custom folder the following subdirectories:

Now set the ScriptPath property on ScriptManager to, say, JS:

All of a sudden, the MicrosoftAjax.js script file is now referenced as shown here:

Needless to say, your pages will fail if no such script files can be found in the specified directory path.

When you install ASP.NET AJAX Extensions, it copies debug and release versions of all system scripts. You can copy these files into your application’s folder from the installation path of ASP.NET AJAX. The typical path looks like the following:

Program FilesMicrosoft ASP.NETASP.NET 2.0 AJAX Extensionsv1.0.61025MicrosoftAjax-LibrarySystem.Web.Extensions1.0.61025.0 Release and debug files live in the same directory. Debug files have the .debug string in front of the .js extension. For example, the debug version of MicrosoftAjax.js is named MicrosoftAjax.debug.js.

In summary, the ScriptPath property allows you to pick up scripts otherwise located in an assembly from a disk folder. The Path attribute, though, can override the global ScriptPath setting for a particular script reference. An interesting use of this feature is when you override a system script, as shown here:

In this case, instead of the original MicrosoftAjax.js, the client receives a customized version saved with a different name.

For each script reference, including the client framework scripts, you can also handle the ResolveScriptReference event and dynamically change the script location. For example, you can redirect the script from a server that is geographically nearer to the user. The following example illustrates how to handle the ResolveScriptReference event to redirect to a different script file:

The script manager fires the ResolveScriptReference event to allow modifications to script references before they are rendered.

Globalization is a programming feature that refers to the code ability of supporting multiple cultures. A request processed on the server has a number of ways to get and set the current culture settings. For example, you can use the Culture attribute on the @Page directive, the Culture property on the Page class, or perhaps the section in the web.config file. How can you access the same information on the client from JavaScript?

Defined on the script manager, the Boolean EnableScriptGlobalization property enables the ScriptManager control to generate and emit the client culture information. When the EnableScriptGlobalization property is true, the ScriptManager emits proper script code that sets up aclient global Sys.CultureInfo object that JavaScript classes can consume to display their contents in a culture-based way. The JavaScript snippet is shown next. It consists of a global variable named __cultureInfo that is called back by Microsoft AJAX library classes with localespecific formatting options. The variable is given a value that corresponds to the JSON serialization of a Sys.CultureInfo object. Note that you won’t see any of this code in your page unless you explicitly set a culture for your page. No injection will ever take place for the default, invariant culture.

The following code snippet shows how to consume culture information from the client:

The desired date format is set explicitly-weekday, day, month name, year, and time-but it contains culture-specific information, such as the name of the weekday and month. By default, on an English operating system, you get something like the following:

You get this result regardless of the culture settings you might have set in the ASP.NET page. This is because in the example the output is generated in JavaScript, where you have no access to the culture information. Try the following now:

When you re-run the page, with the EnableScriptGlobalization flag turned on, you get a different result, as shown in Figure 3-2. 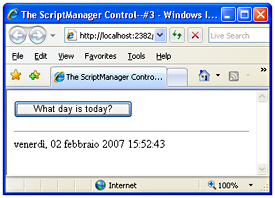 Only a few methods on a few JavaScript objects support globalization. In particular, it will work for the localeFormat method of Date, String, and Number types. Custom JavaScript types, though, can be made global by simply calling into these methods or accepting a Sys.CultureInfo object in their signatures.

Script files can have localizable elements such as text strings for messages and user-interface elements. When the EnableScriptLocalization property is set to true and a UI culture is properly set in the page, the script manager automatically retrieves script files for the current culture, if any.

This information is not enough for the ScriptManager to pick up localized scripts, if any. You also need to specify which UI cultures you intend to support for each script reference. You indicate the supported cultures through the ResourceUICultures property on individual script references. The property is a comma-separated string of culture symbols. Here’s an example:

Note that the ResourceUICultures is ignored if the Path attribute is not specified on the script reference tag.

At this point, if the page requires a script named Person.js and the culture is set to it-IT, the ScriptManager object attempts to retrieve a script file named Person.it-IT.js from the same path.

With explicit registration, the script manager knows what scripts are going to be present and processed during an asynchronous postback. The alternative would be quite costly and error-prone-parsing the contents of the updatable panel looking for the

The property error returns a JavaScript object that represents the server-side exception. From this object, you get the error message. The errorHandled property is a Boolean value that indicates whether the script is done with the error. By setting this property to true, you disable the popup and get output like that shown in Figure 3-4.

Figure 3-4: Incorporating the error message in the page

The ScriptManager control is in some sense the heart and soul behind each ASP.NET AJAX page. It orchestrates partial page refreshes, bootstraps the Microsoft AJAX library by loading scripts, generates proxies for local Web services, and coordinates the work of updatable panels. The ScriptManager control also provides functionality to control developers writing AJAX-enabled controls.

Understanding the behavior of this control is key to setting up effective, no-surprises ASP.NET AJAX pages that load custom script and perform the most common and popular AJAX-style operation-partial page rendering. In the next chapter, we’ll take the plunge into the UpdatePanel control-that is, the brains behind partial page rendering.