As the word filtering suggests, most of the methods described in this section are used to improve the quality of the image. In general, these methods calculate new pixel values by using the original pixel value and those of its neighbors. For example, we can use the equation

which looks very complicated. Let's start from the left: Eq. (4.12) calculates new pixel values s out by using an m x m array. Usually, m is 3, 5, or 7; in most of our exercises we use m = 3, which means that the original pixel value s in and the values of the eight surrounding pixels are used to calculate the new value. k is defined as k = ( m “ 1)/2.

which specifies the pixel itself and its eight surrounding neighbors.

The filter kernel moves from the top-left to the bottom-right corner of the image, as shown in Figure 4.19. To visualize what happens during the process, do Exercise 4.6: 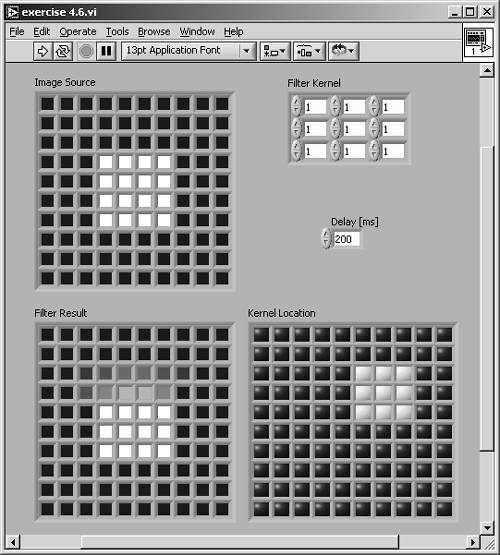 Visualize the movement of a 3 x 3 filter kernel over a simulated image and display the results of Eq. (4.12). Figures 4.19 and 4.20 show a possible solution.

In this exercise I simulated the image with a 10 x 10 array of color boxes. Their values have to be divided by 64 k to get values of the 8-bit gray-scale set. The pixel and its eight neighbors are extracted and multiplied by the filter kernel, and the resulting values are added to the new pixel value.

You may have noticed that I did not calculate the border of the new image in Exercise 4.6; the resulting image is only an 8 x 8 array. In fact, there are some possibilities for handling the border of an image during spatial filtering:

LabVIEW provides a number of predefined filter kernels; it makes no sense to list all of them in this book. You can find them in IMAQ Vision Help: In a LabVIEW VI window, select Help / IMAQ Vision... and type " kernels " in the Index tab.

In this exercise VI, you will be able to visualize the built-in IMAQ Vision filters, and this allows you to define your own 3 x 3 kernels. Figure 4.21 shows the front panel: The Menu Ring Control (bottom-left corner) makes it possible to switch between Predefined and Manual Kernel. I used Property Nodes here to make the unused controls disappear.

Next, let's look at the diagram (Figure 4.22). The processing function we use here is IMAQ Convolute ; the predefined kernels are generated with IMAQ GetKernel . So far, so good; but if we use manual kernels, we have to calculate a value called Divider, which is nothing more than 1/ m 2 in Eq. (4.12).

Obviously, 1/ m 2 is not the correct expression for the divider if we want to keep the overall pixel brightness of the image. Therefore, we must calculate the sum of all kernel elements for the divider value; with one exception [2] of course, 0. In this case we set the divider to 1. [3]

[2] This happens quite often, for example consider a kernel

[3] Note that if you wire a value through a case structure in LabVIEW, you have to click once within the frame. 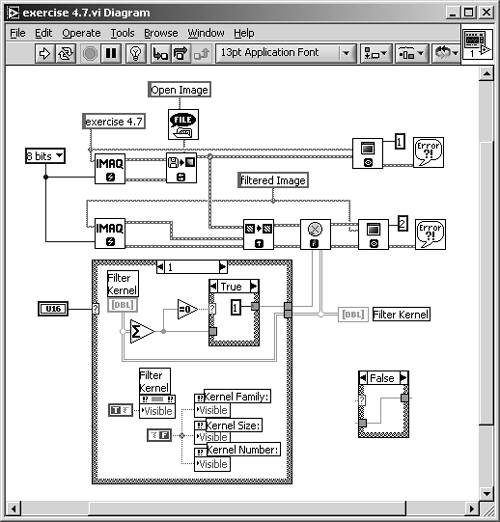 The four filter families which you can specify in Exercise 4.7 (as well as in the Vision Builder) are:

All smoothing filters build a weighted average of the surrounding pixels, and some of them also use the center pixel itself.

A typical smoothing kernel is shown in Figure 4.23. Here, the new value is calculated as the average of all nine pixels using the same weight: 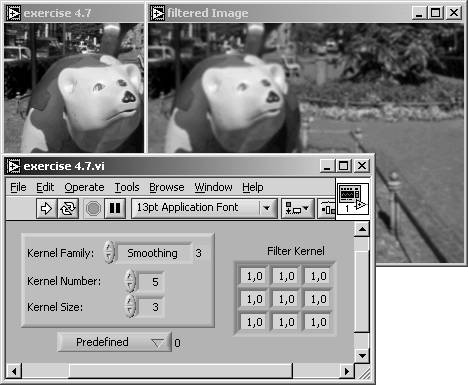 Other typical smoothing kernels are

Note that the coefficient for the center pixel is either 0 or 1; all other coefficients are positive. 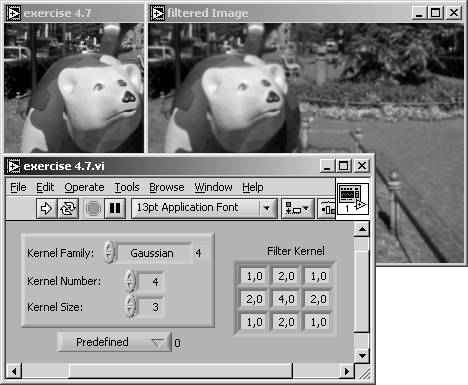 More examples for Gaussian kernels are

Both smoothing and Gaussian kernels correspond to the electrical synonym " low-pass filter" because sharp edges, which are removed by these filters, can be described by high frequencies.

An important area of study is the detection of edges in an image. An edge is an area of an image in which a significant change of pixel brightness occurs.

A gradient filter extracts a significant brightness change in a specific direction and is thus able to extract edges rectangular to this direction. Figure 4.25 shows the effect of a vertical gradient filter, which extracts dark-bright changes from left to right. 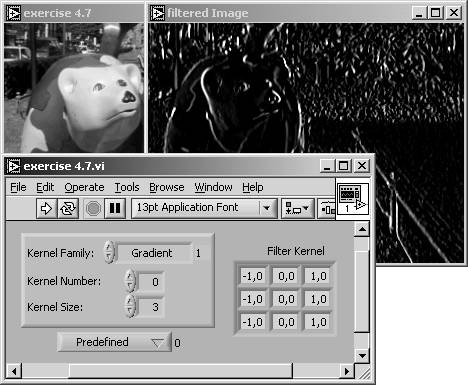 Note that the center coefficient of this kernel is 0; if we make it equal to 1 (as in Figure 4.26), the edge information is added to the original value. The original image remains and the edges in the specified direction are highlighted. 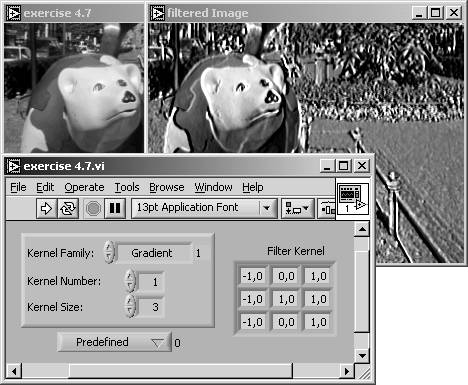 Figure 4.27 shows the similar effect in a horizontal direction (dark-bright changes from bottom to top). 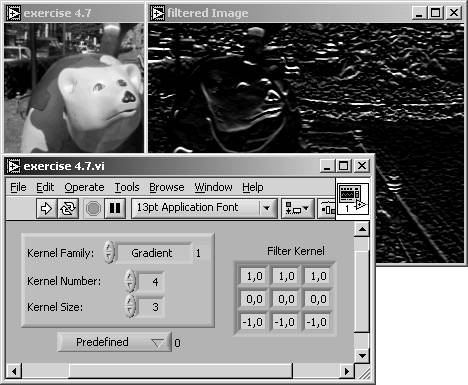 In general, the mathematic value gradient specifies the amount of change of a value in a certain direction. The simplest filter kernels, used in two orthogonal directions, are

All kernels of the Laplacian filter group are omnidirectional; that means they provide edge information in each direction. Like the Laplacian operator in mathematics, the Laplacian kernels are of a second-order derivative type and show two interesting effects: 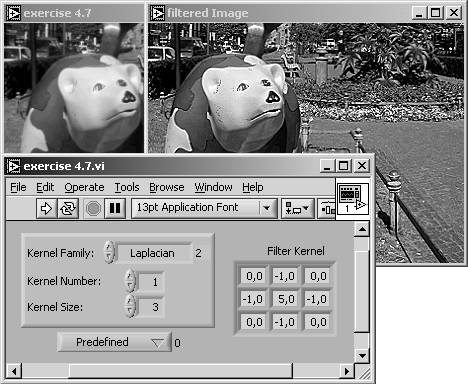 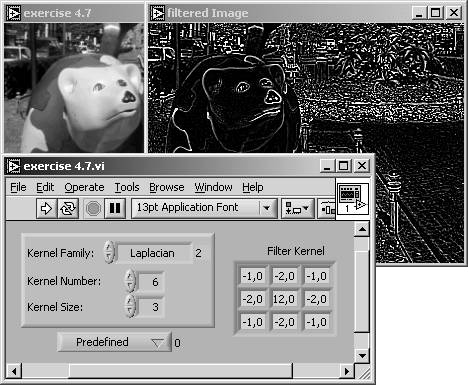 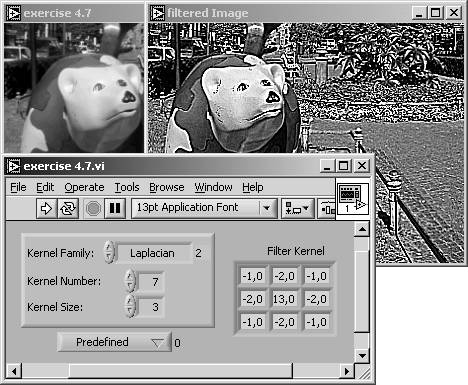 Both gradient and Laplacian kernels correspond to the electrical synonym "high-pass filter." The reason is the same as before; sharp edges can be described by high frequencies.