Another image sensor technology has joined the market in the past years : image sensors which are structured like a CMOS [5] memory chip and therefore need row and column address decoders. These sensors make use of a photon-to- electron -to-voltage conversion, taking place in each pixel element.

Figure 2.20 shows the principle of such CMOS image sensors , which leads to a number of advantages, as well as to some drawbacks. The main advantages are the following:

Table 2.1 compares some properties of CMOS image sensors with those of CCDs. The first line (technology) explains how the photocurrent, which is generated by the light radiation on the pixel, is transferred in the related voltage. In CCD sensors, this is done after the electron charge, generated in an MOS capacitor , is transferred to the sensor output. In CMOS sensors, each pixel element has an integrated active amplifier , which generates the voltage and can be accessed by the row and column address decoders. Figure 2.21 shows a CMOS sensor chip; on the right and on the bottom of the sensor the address decoder areas are visible. 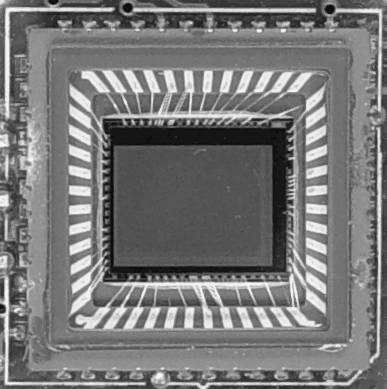 A great disadvantage of CMOS image sensors is their noise generation. The continuous conversion of the photocurrent in the circuit shown in Table 2.1, adds an additional noise source to the signal generation. The main reason is that the CMOS production process is not primarily designed for photoelements, resulting in a poorer sensitivity. Thus, the necessary higher amplification leads to a significantly higher noise level. Moreover, as in CCD sensors, fixed pattern noise (FPN) is another main issue.

Because of the construction of CMOS image sensors, they show absolute immunity from blooming or image smear. Blooming ”the "overflow" of a high amount of electrons in one cell into the neighbor cells ”cannot occur in CMOS sensors, because the electron-to-voltage transfer already takes place in the cell itself. Figure 2.22 shows again the blooming effect in a CCD image sensor (Figure 2.11; the sensor itself can be seen in Figure 2.15), compared to the behavior of a CMOS sensor (Figure 2.21).

Figure 2.23 shows the behavior difference between CCD und CMOS regarding image smear sensitivity. Recall that image smear is the vertical transportation of "errors" during the image readout process. In this example, the sensor area (without lens) is illuminated with a laser pointer, thus flooding the respective sensor areas with photons . The left image, the CCD sensor response, shows a significant smear effect; the area beneath the illumination spot is lighted as well.

The right image shows the behavior of a CMOS sensor with the same laser pointer illumination. Here, the illumination spot is clearly limited, showing absolutely no image smear effect.

You can find more in-depth information about CMOS image sensors, for example, in [17] and [18].