The reading of the data generated by a CCD sensor is influenced by the signal that is used for the transfer of the image content. Mostly, video signals are used to display the data on an analog video monitor; this leads to a number of requirements:

Currently, two standards are established worldwide: the European International Radio Consultative Committee (Comit Consultatif International des Radiocommunications, or CCIR) standard and the U.S. standard RS 170. In both standards, the full video image (called frame ) is divided into two parts (called fields ), which are displayed with a half-line offset, in order to double the picture refresh rate. Figure 2.24 shows this principle, which is called interlacing , using the European CCIR standard.

[6] Some of these lines are necessary for the flyback of the electron beam; the rest can be used for transmitting additional information.

[7] In comparison, cinema movies usually have a refresh rate of 24 images per second.

Considering these techniques, especially interlacing, it is evident that the linear reading of the contents of a CCD sensor chip leads to complications. It would make more sense to read every second pixel for the generation of field 1, and afterwards the rest of the pixels for field 2.

Actually, CCD sensors for specific video standards may include this functionality for the generation of images consisting of two fields. Here, a sensor element consists of two photoelements, one for the odd and one for the even pixel, and four CCD cells (see also Figure 2.27). Generating field 1, the odd pixels are read and transferred to the sensor output; field 2 uses the even pixels.

The same sensor can be used for noninterlaced mode, in which both pixel sensors are read, both fields are displayed in the same area, and the refresh rate is doubled ; Figure 2.28 shows this principle.

IMAQ Vision contains a function that performs functions such as interlacing and deinterlacing: IMAQ Interlace . With this SubVI, it is possible either to extract the odd or even field areas from an image or to build an image, using the odd and even fields of previously acquired image data. Figure 2.29 shows an example exercise. 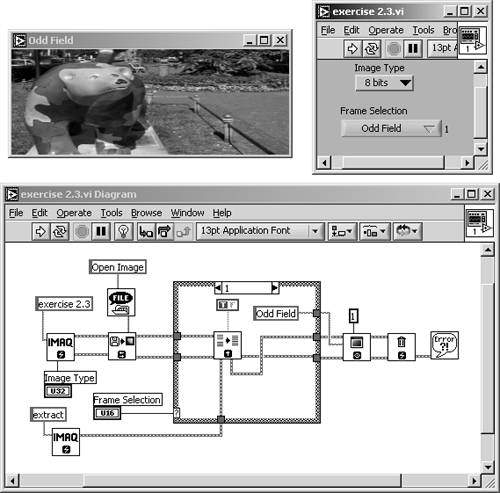 Finally, newer cameras , which generally allow for higher picture refresh rates, use progressive scan sensors , where the full image resolution is used. Typical resolutions are, for example, 640 x 480 or 1280 x 1024. As shown in Figure 2.28, the sensor consists only of a single photoelement and three CCD cells per sensor element, which makes a higher integration of the sensor possible.