The easiest way, of course, to alter a digital image is to apply changes to its (usually 8-bit, from 0 to 255) gray-level values. Before we do this, it might be interesting to learn how the gray-level values of an image are distributed.

IMAQ Vision provides two simple tools for this distribution; they do almost the same thing:

According to [4], the histogram function H (k) is simply defined as

with n k as the number of pixels with the gray-level value k . Figure 4.1 shows the histogram function H ( k ) for our bear image using IMAQ Vision Builder. In addition, you can try the following exercise. 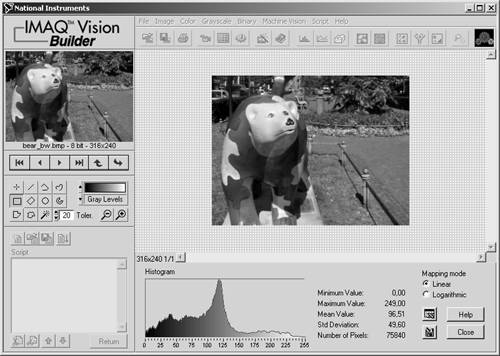 Create a LabVIEW VI that provides the functionality described above directly in IMAQ Vision, using the functions IMAQ Histogram and IMAQ Histograph . You can find them under Motion and Vision / Image Processing / Analysis. [1] Figure 4.2 shows a possible solution.

[1] Actually, the histogram is an image analysis function according to our definition. On the other hand, we need its results for the following sections, so I explain it here.

From IMAQ Vision Builder, the histogram data can be exported for further processing into MS Excel; Figure 4.3 shows the data from Figure 4.1 and 4.2 in an MS Excel diagram.

Figure 4.2. Histogram and Histograph of an Image

If the histogram function is applied to a color image, it returns values H ( k ) for each color plane; for example, three histograms for red, green, and blue in the case of an RGB image. Figure 4.4 shows an example using IMAQ Vision Builder. 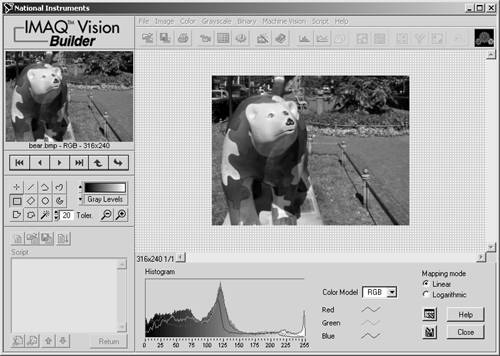 You know how to adjust brightness and contrast values of your TV set or TV video PC card; the intention is to get a "better" image, what obviously means a better distribution of the gray-level values. This is achieved by a function f ( g ) ( g are the gray-level values), which assigns a new value to each pixel.

If we consider Eq. (1.1), then our function f ( g ) will modify the gray-level values according to

with s in as the original values and s out as the resulting values. Because the possible results are limited to 256 values, the function f ( g ) usually is realized by a table consisting of 256 values, a look-up table (LuT). Therefore, if

The easiest way to generate a LuT is to use mathematic functions, such as logarithmic , exponential, and power. We try this in the following exercise.

In this and the following exercise we compare the fixed IMAQ Vision functions to the impact of manually generated LuTs. First of all, create the VI shown in Figure 4.5.

Use the function IMAQ UserLookup to generate the second image, which is used for the comparison of the result to the built-in IMAQ function; here, the function IMAQ MathLookup . An XY graph displays the entire LuT by a simple line.

Figure 4.6 shows the front panel of Exercise 4.2. Case 0 of the VI leaves the gray-level values of the original image unchanged, which means that the location 0 of the LuT gets the value 0, 1 gets 1, and so on until the location 255, which gets 255. The XY graph shows a line from bottom left to top right.

Another built-in LuT is a logarithmic one; if the function f ( g ) were f ( g ) = log( g ), then it would be sufficient to add the logarithm base 10 function of LabVIEW to case 1 and watch the results.

Oops ”that did not work. Naturally, the logarithm (base 10) of 255 is about 2.4, so we have to scale the entire range of resulting values to the 8-bit gray-scale set. The resulting function is

The next function is exponential. If we generate it the way we did above, we see a far too steep function because the values rise too fast. A correction factor c , according to

48 is the value used in the built-in IMAQ function (see the realization of this equation in Figure 4.8).

The square function is easy: If we multiply the value location by itself and scale it like we did above, we get

Square root is quite similar. Figure 4.10 shows the results, and here is the function:

The next two cases need an additional factor called power value p : We create the function

IMAQ Vision calls this function power x ; its realization can be seen in Figure 4.11 for a power value of p = 3.

The last function used in this exercise is called power 1/ x and is simply realized by calculating the reciprocal value of p ; use it like the power x function:

Figure 4.12 shows the implementation of the power 1/ x function in LabVIEW and IMAQ Vision.

The power value p is often called gamma coefficient; it indicates the degree of impact of the power function. We return to it in Exercise 4.5.

IMAQ Vision also contains a function called IMAQ Equalize , which distributes the gray-level values evenly over the entire gray-scale set (usually 0 to 255 for 8 bits). If an image does not use all available gray levels (most images do not), the contrast (the difference from one gray level to another) of the image can be increased.

Create a VI that equalizes our bear image. In this case, it is not so easy to create a user defined LuT, so we concentrate on the histograms. Both of them can be seen in Figure 4.13; Figure 4.14 shows the diagram.

Now you know why you should plot the LuTs in an XY graph. In most cases, you can predict the results by simply looking at the plotted LuT. For example, if the LuT graph rises from bottom left to top right, then the resulting image will be not inverted; if it looks like a logarithmic function, the overall brightness of the resulting image will be increased because the log function compresses regions of high gray-level values.

Another method is shown in Exercise 4.5. Instead of creating the LuT by using mathematical functions, we can use the function IMAQ BCGLookup , which changes the following parameters:

Exercise 4.5 compares the IMAQ function with a self- constructed one:

The IMAQ function IMAQ BCGLookup modifies the image by changing the values of brightness, contrast, and gamma. Create a VI that does the same with a manually generated LuT.

Figure 4.17 shows a possible solution; Figure 4.18 shows the diagram. I did only the brightness and the contrast adjustment; the realization of the gamma coefficient is left for you.