Appendix A Extra Delphi Tools by the Author

During the last few years I have developed a number of small components and Delphi add-in tools. Some of these tools were written for books or were the result of extending examples from books. Others were written as a helper for repetitive operations. All these tools are available for free, and some include the source code. This appendix provides a list, including in particular tools mentioned in the book. Support for all these tools is available on my newsgroups (see www.marcocantu.com for directions).

This is a set of wizards you can install in Delphi, either within an extra pull-down menu or as a submenu of the Tools menu). The wizards (freely available at www.marcocantu.com/cantoolsw) are unrelated and offer disparate features:

List Template Wizard  Streamlines the development of similar list-based classes, each with its own type of objects. This wizard is mentioned in Chapter 4. Because it does a search-and-replace operation on a base source file, it can be used any time you need repeated code and the name of a class (or other entity) varies.

OOP Form Wizard  (Mentioned in Chapter 4.) Allows you to hide the published components of a form, making your form more object-oriented and providing a better encapsulation mechanism. Start it when a form is active, and it will fill the OnCreate event handler. Then you must manually move part of the code into the unit initialization section.

Rebuild Wizard  Allows you to rebuild all the Delphi projects in a given subfolder after loading each of them in sequence in the IDE. You can use this wizard to grab a series of projects (like those in a book) and open the one you are interested in by clicking on the list: 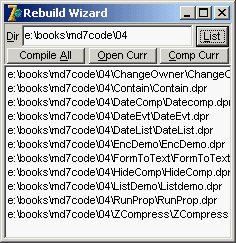 Clip History Viewer  Keeps track of a list of text items you've copied to the Clipboard. A memo in the viewer's window shows the last 100 clipped lines. Editing the memo (and clicking Save) modifies this Clipboard history. If you keep Delphi open, the Clipboard will also get text from other programs (but only text, of course). I've seen occasional Clipboard-related error messages caused by this wizard.

VCL Hierarchy Wizard  Shows the (almost) complete hierarchy of the VCL, including third-party components you've installed, and allows you to search one class and see many details (base and subclasses, published properties, and so on). Clicking the button regenerates both the list and the tree (in sequence—hence the progress bar runs twice): 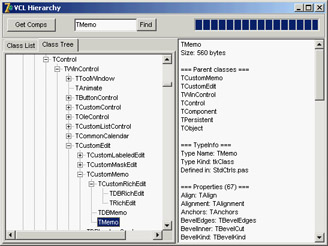 The list of classes is generated by using predefined core classes (some are still missing; feel free to send suggestions) and then adding each component of the installed packages (Delphi's, yours, third parties'…) along with the classes of all the published properties having a class type. However, classes used only as public properties are not included.

Multiline Palette Manager  Allows you to turn Delphi's Component Palette into a TabControl with multiple lines of tabs:

You can use this stand-alone tool to convert a Delphi project from VCL to CLX (and vice versa, if you configure it to do so). It can simultaneously convert all the files in a given folder and its subfolders. Here's an example of its output: 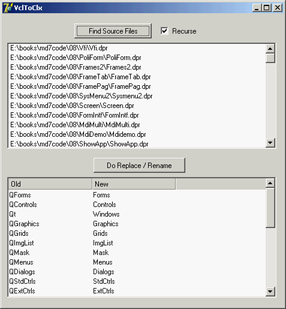 The program's source code is available in the Tools folder of the book's source code. The VclToClx program converts unit names (based on a configuration file) and handles the DFM issue by renaming the DFM files to XFM and fixing the references in the source code. The program is unsophisticated—it doesn't parse the source code but instead looks for occurrences of the unit names followed by a comma or semicolon, as happens in a uses statement. It also requires the unit name to be preceded by a space, but you can modify the program to look for a comma. Don't skip this extra test; otherwise the Forms unit will be converted to QForms, but the QForms unit will be re-converted to QQForms! 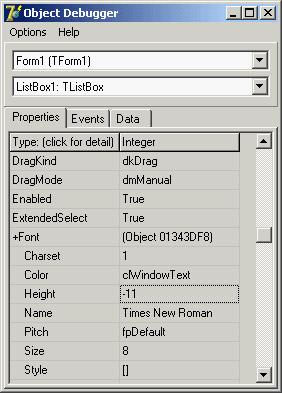 It allows read-write access to all the published properties of a component, and has two combo boxes that let you select a form and a component within the form. Some of the property types have custom property editors (lists and so on).

You can place the Object Debugger component on a program's main form (or you can create it dynamically in code): It will appear in its own window. There is room for improvement, but even in its current form this tool is handy and has numerous users.

There are many tools to track the memory status of a Delphi application. During the development of a project, I had to write such a tool, and afterward I made it available.

I've written a custom memory manager that plugs into Delphi's default memory manager, keeping track of all memory allocations and de-allocations. In addition to reporting the total number (something Delphi also does now by default), it can save a detailed description of the memory status to a file.

Memory Snap keeps in memory a list of allocated blocks (up to a given total number, which can be easily varied), so that it can dump the contents of the heap to a file with a low-level perspective. This list is generated by examining each memory block and determining its nature with empirical techniques you can see in the source code (although they are not easy to understand). The output is saved in a file, because this is the only activity that doesn't require a memory allocation that would affect the results. Here is a snippet of a sample file:

The program could be extended to profile memory usage by type (strings, objects, other blocks), track unreleased blocks, and keep memory allocations under control.

Again, the source code of this component is freely available in the Tools folder of the book's source code.

As you have seen, some of these tools are available with full source code. They are licensed under the LGPL (Lesser General Public License, www.gnu.org/copyleft/lesser.html), which means you can freely use and redistribute them in any way, including making modifications, while the author retains the original copyright. The LGPL doesn't allow you to close-source your extensions, but you can use this library code within programs you sell, regardless of the source code availability. If you extend these tools by fixing bugs or adding new features, I ask you to send your updates to me so I can further distribute the enhancements and we can avoid forking the code into too many versions. The license does not require you to do so, though.

Part IV - Delphi, the Internet, and a .NET Preview

The Java Tutorial: A Short Course on the Basics, 4th Edition