A Hop, a Step, and a Jump Getting DBA Privileges Indirectly

Getting DBA from CREATE ANY TRIGGER

Using the example from the last chapter, assume you have an account, MDSYS, which owns a trigger that is vulnerable to SQL injection. On 10g Release 2, MDSYS is not a DBA but it does have the CREATE ANY TRIGGER system privilege. This can be leveraged to gain DBA privileges. As you will have guessed, or already knew, the CREATE ANY TRIGGER privilege allows the grantee to create a trigger in any schema, with the only restriction being that triggers can't be placed on objects owned by SYS. The process of getting from CREATE ANY TRIGGER to DBA is as follows.

First, you determine who are DBAs on the system and what tables or views they own from which PUBLIC can insert, update, or delete. The SYSTEM user provides a good example. By default, it's a DBA and it owns a number of tables that PUBLIC can perform DML operations against. Once the DBAs are found, you create a trigger in their schema for that table and then perform the DML operation that's set to fire it. What goes inside the trigger is the key, as the trigger executes with the privileges of the owner; in the case of SYSTEM, you need to get the trigger to execute a procedure you've created as AUTHID CURRENT_USER. You can do whatever you want to do, as SYSTEM goes into this procedure. Let's look at the MDSYS example.

The MDSYS.SDO_DROP_USER_BEFORE trigger executes when the drop user command is executed. In addition, because the trigger is a "before" trigger - and therefore fires before any action is taken - the user being dropped does not have to exist, and the user issuing the command doesn't have to have the privileges to drop a user. Therefore, anyone can issue DROP USER FOO and the trigger will fire in the background. If you look at the SDO_DROP_USER_BEFORE trigger, you can see it executes the following:

Here, dictionary_obj_name is the user being dropped. It is possible to inject arbitrary PL/SQL here, as shown in the following example:

Note the AA on the sixth line. This is the output from injecting DBMS_OUTPUT.PUT_LINE('AA' into the DROP USER statement. Now let's move on and get DBA privileges from this as described earlier. We'll inject a procedure that creates a trigger on the SYSTEM.OL$ table, which PUBLIC has the permissions to INSERT into. Once created, you insert into the OL$ table, firing the trigger and getting DBA privileges:

Getting DBA from CREATE ANY VIEW

You can exploit CREATE ANY VIEW in a similar manner. By default, on 10g Release 2 the only user granted this privilege is SYS; and if you can inject SQL into a SYS procedure, then you're already DBA anyway. For illustration purposes, let's assume a test user with this privilege and create a vulnerable procedure:

With our vulnerable procedure and test user with the CREATE ANY VIEW privilege in place, let's set about exploiting this to gain DBA privileges.

We need to create the view in the schema of a DBA and then somehow get a high-privilege user to access this view. This second part might sound difficult but it's really not. Hundreds of instances of procedures owned by SYS take the name of a view or table as a parameter, which it then accesses. For demonstration purposes, let's save time and quickly create our own - ensuring that it is not vulnerable to SQL injection by using the DBMS_ASSERT.QUALIFIED_SQL_NAME function:

Okay, now down to getting DBA privileges. What we'll do is inject into the VTEST.VPROC procedure a procedure of our own that creates a view in the SYSTEM schema. We choose the SYSTEM schema here because the CREATE ANY VIEW privilege won't allow us to create a view in the SYS schema. The view we create will call a function that we own, and we place our final code to get DBA privileges in here. When we access the view via the SYS.SPROC procedure, this function will be executed, granting us DBA privileges (see Figure 7-1): 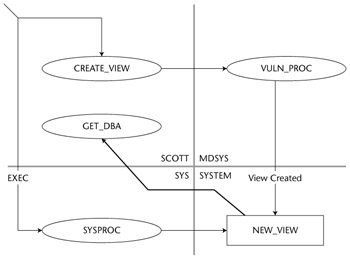 Getting DBA from EXECUTE ANY PROCEDURE

I barely need to explain this one. Needless to say, when users with this privilege can find a procedure owned by SYS that executes arbitrary SQL, they can gain DBA instantly. There are quite a few such procedures, as shown here:

Getting DBA from Just CREATE PROCEDURE

Okay - here's the problem. We've found a SQL injection flaw in a package owned by a user who has very few privileges. Accounts such as OLAPSYS, MDSYS, DBSNMP, and ORDSYS are granted the create procedure privilege. Thus, if they change one of their procedures on which another procedure owned by someone else depends, then they can begin to execute code as that other user. If that user is not a DBA, then you're at least one step closer. For example, the VALIDATE_CONTEXT procedure owned by SYS depends on the DRUE package owned by CTXSYS. If CTXSYS changes this package and places exploit code in it, then CTXSYS can gain DBA privileges. Thus, if CTXSYS owns a PUBLIC executable procedure that's vulnerable to SQL injection, then it's possible to gain DBAprivileges. As it happens, on 10g Release 2 CTXSYS does not have this privilege, but you get the idea. To see which procedure depends on what, examine the DBA_DEPENDENCIES view.

In addition to the privileges presented here, many other privileges can be leveraged to gain DBA privileges. The few described in this chapter should give you an understanding of the process. You can see that even lesser privileges can eventually lead to an attacker gaining DBA privileges, but it is certainly more difficult and not a foregone conclusion. In Oracle, a user who has the CREATE ANY x privilege can trivially gain DBA privileges, however. As such, it is highly recommended that the number of users granted such privileges be highly restricted, and given only as a strict business requirement.