The Oracle network architecture encompasses many components - all of which neatly corresponds to the OSI networking model (see Figure 2-1). This architecture enables Oracle client and server applications to transparently communicate over protocols such as TCP/IP. The session protocol that interfaces between the applications (Oracle Call Interface, or OCI, on the client and Oracle Program Interface, or OPI, on the server) and the network layer is known as Net8 (Net9), and before that SQL*Net. Between the OCI/OPI and Net8 layer is a presentation protocol called Two-Task Common (TTC) that is responsible for character set and data type conversion differences between the client and the server. The Net8 session protocol has three components - the Net Foundation and Routing/Naming/Auth and TNS - the last two making up Protocol Support. Supported transport protocols include TCP/IP, with or without TCP, Named Pipes and Sockets Direct Protocol (SDP), which enables communication over Infiband high-speed networks. Underpinning all of this is the Transparent Network Substrate protocol, also known as TNS. The task of TNS is to select the Oracle Protocol Adapter, wrapping the communication in one of the supported transport protocols. 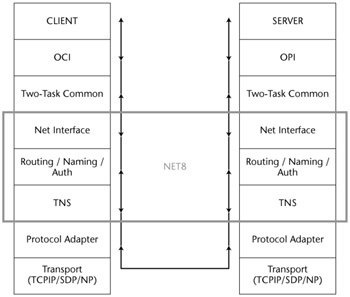 Every TNS packet has an eight-byte header. The first two bytes (WORD) of the header are used for the packet length - inclusive of the header size. The size, like all values, is big-endian. The next WORD is for the packet checksum if checksumming is done - by default it is not, and the value for this WORD is 0x0000. The next byte is used to indicate the packet type - for example, the most common are as follows:

When connecting to Oracle, at the TNS level the client sends the server a Connect packet (type 1) specifying the service name they wish to access. Provided the Listener knows of such a service, one of two things can happen: The Listener could send an Accept packet (type 2) or it could redirect the client to another port with a Redirect packet (type 5). If the former option occurs, then the client attempts to authenticate. This is covered in detail in Chapter 4, "Attacking the Authentication Process." If the latter occurs, then the client sends a Connect packet to the port to which they've been redirected and requests access to the service. If all goes well, the server issues an Accept packet and authentication takes place. All authentication packets are Data packets with a type of 6.

Going back, if the Listener does not know of the service to which the client is requesting access, then it issues a Refuse packet - type 4. Once authenticated, queries and results packets are Data packets. Every so often you'll see a packet of type 12 (0x0C) - this is a Marker packet, which is used for interrupting. For example, if the server wishes the client to stop sending data, then it will send the client a Marker packet.

Continuing with the details of the TNS header, the next byte is the header flags. Generally the flags are unused, but the 10g client may set the value to 0x04.

The final two bytes form a WORD for the header checksum - not used by default and set to 0x0000:

Before delving further into the packet, it would be useful to take a look at Refuse packets - type 4. Refuse packets indicate an error of some kind - for example, a logon denied error with an "invalid username/password" - ORA-01017. With these errors, the 54th byte indicates the problem. A 3 is an invalid password; a 2 indicates no such user. Clearly, you can derive potentially useful information even from Refuse packets.

Most packets you'll see on the wire are Data packets (type 6). With Data packets, the WORD after the TNS header is for the Data Flags. If the packet is a disconnect packet, then this WORD is set to 0x0040 - otherwise, it is generally 0x0000.

The next byte after the Data Flags (byte 11) determines what's in the Data packet:

Some of these may be called prior to authentication - for example, the Version (0x3B) TTI function:

The best way to get a handle on the TNS protocol, other than examining the Oracle JDBC client (classes12.zip), is to grab some packets off the wire with a network sniffer and see what's going on.

Throughout the remainder of this book you'll see a number of packet dumps; refer back to this chapter when examining the contents.

Getting the Oracle Version

The Listener Version and Status Command

From the preceding output, you can see that the server is running 10g Release 2 on Windows.

In a TNS connect packet, the WORD (which is two bytes in size) found nine bytes into the packet specifies the TNS protocol version being used. The next WORD, bytes 11 and 12, specifies the earliest version number the sending system understands. For example, if an Oracle client running version 8.1.7.4 connects to the Listener on an Oracle server, then the client sends 0x0136 as the TNS protocol version being used and 0x012C as the earliest version it understands. This way, two different versions of Oracle can communicate by choosing a TNS version they both understand. Clearly, because later versions of Oracle use improved versions of the TNS protocol, we can use these two WORDs to determine the server version. We do this by specifying the earliest version number as the same version as the current version being used - so both WORDs in the connect packet have the same value. Furthermore, we start with a high version number, one known not to exist yet, and work down. Thus, we send 0x13C for both the current and earliest versions in our first connect packet. The server should not understand this version so it will either time-out or produce an error. Next, we reduce this to 0x13B, then to 0x13A, then to 0x139, and so on all the way down to 0x00CC. As soon as the server starts responding as expected, we know the latest version of the TNS protocol it speaks. From this we can deduce what the Oracle greater version is, e.g., 10, 9, or 8, etc.

For more information, see tnsver.c at the end of this chapter.

If the XML database is running, one can telnet to TCP port 2100 to get the version information. This service is an ftp service and the banner reveals the information:

If the Listener receives a TNS command it doesn't understand, it sends an error back. This error text contains a VSNNUM that holds a decimal number such as 169869568. If we convert this number to hexadecimal, look what we get: 0x0A200100. This is the Oracle version number in disguise - in this case 10.2.0.1.0. The following packer dump is taken from a Listener that doesn't understand the ‘unbreakable' command:

See tnsver.c at the end of this chapter.

We discussed TTC functions earlier and mentioned the version function 0x3B. This will cause an Oracle server to reveal its version prior to authentication.

Once an Accept packet has been received by the client from the server, the client may choose to negotiate additional network services such as Authentication, Encryption, Data Integrity, and Supervisor. The version of the client or server can be found three bytes after the ANO negotiation header (0xDEADBEEF) - 17 bytes into the packet. In the following capture, you can see the version is 8.1.7.4 - highlighted in bold:

This chapter described the TNS protocol and some of the ways in which it is possible to get the version number using features in the protocol. You can see how this occurs from tnsver.c:

Later in the book, you'll learn how to get the version information down to the exact patch level.