To use Domino Designer to create a Java agent, do the following:

As you can see, Domino Designer starts you off with some sample Java source code. Here's a slightly reformatted version of this simple template:

This is a complete class definition that declares an agent named JavaAgent. Although it doesn't really do anything yet, all the elements needed for a Java agent are here. I'll discuss each in turn .

The first line is an import statement that tells the Java compiler that this class makes use of the lotus.domino package. You will want to put this statement in every source file that uses classes from the Notes API, such as Session and AgentContext .

A package is a named group of related classes. Packages use a hierarchical naming system to prevent name clashes with other code. The widespread convention is to start package names with your domain name reversed , as in com.libertastechnologies or com.ibm. As you can see, Lotus opted to leave off the com. Each level in the hierarchy is then separated by periods, so you can have lotus.domino (the Notes Java API package) or com.libertastechnologies.domino. utils . Package names are essentially paths to your source and class files. Each name in the hierarchy maps to a directory or subdirectory. To see this for yourself, use a tool such as WinZip to open the NOTES.JAR file and look at the class files and directories. JAR files are a handy way to collect class files together into one big compressed file. NOTES.JAR contains most of the Java files used by Notes and Domino, including some by IBM and others by a company called Acme.

Just as files can be specified with a pathname, classes can be specified with their fully qualified package name, as in lotus.domino.Session. If you want, you could prefix all the class names in your code with their package name, but this quickly becomes cumbersome. import statements are easier. These tell the compiler which packages to search in order to find the classes in your code. For example:

This statement tells the compiler to search the lotus.domino package. import statements can also specify a particular class in a package:

This is useful when you're importing separate packages that contain classes with the same name. Using an import statement to explicitly specify the desired class helps clear up any ambiguity.

Many people confuse import statements with #include directives in other languages. import statements don't actually import anything. They're more like PATH statements that inform the operating system where to look for programs on your hard disk.

To make a Java agent, you create a class that extends Domino's AgentBase class. This ensures that your agent initializes the Notes system because AgentBase extends the NotesThread class. NotesThread is discussed later in this chapter.

AgentBase then creates a Session object and an AgentContext object. Both are used to get runtime information about the agent's environment. AgentBase also takes care of things such as wiring the standard Java input and output streams to the Notes Java console and setting up a timer thread that can limit agent execution time according to administrator settings. After everything has been set up, AgentBase calls NotesMain() .

The NotesMain() method, like the main() method in Java applications, is where your program begins and ends. Simple agents often consist of just this method, although it's usually a good idea to split up larger amounts of code into several methods and classes.

NotesMain() is one of the few Java methods names I've seen that starts with a capital letter. Unfortunately, the folks at Lotus choose to ignore the lowercase method name convention. Perhaps they thought Notes deserved to be capitalized!

As was mentioned earlier, every Java program written for Domino needs a Session object. The Session object is the top of the Domino object hierarchy and provides the entry point for your Java programs. You can use the Session object to do a variety of things. For the most part, you will use it to access existing data, such as DbDirectory objects and Database objects. You will also use it to create independent objects such as DateTime , DateRange , Name , and NewsLetter . Use the Session object to access system properties such as the Notes version, current username, and platform. Session is also used to call global methods such as evaluate() and freeTimeSearch() that don't seem to fit anywhere else.

Each agent starts with its own Session object, which you can access from any method in your agent's class by using the getSession() method, as in this example:

You can then use the variable l_nsCurrent to call methods like this:

To learn the full story about Session or any other class in the NOI, do the following:

When the help system refers to the properties of a class, it means fields that can be accessed with get methods, as in getServerName() . The property is ServerName . Things aren't always so clear-cut , though. Methods such as getDatabase() are listed separately, presumably because they retrieve data outside the class in question.

You can also use the Info pane to bring up help on a class or method (see Figure 18.2):

Figure 18.2. Use the Info pane to browse the classes and methods of the Notes Java API. 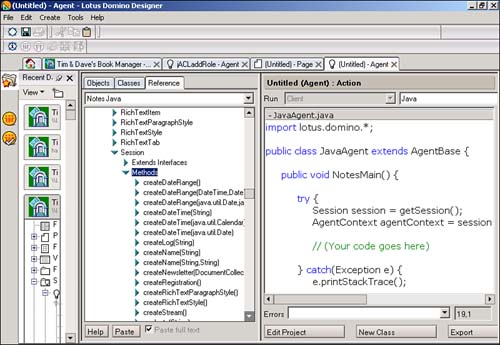 AgentContext is most often used to get a list of documents in the current database that must be processed . The documents that are considered unprocessed depend on the Which Documents(s) Should It Act On setting in the Programmer's pane. You can choose to process unread documents, selected documents, modified documents, all documents in the view, or all documents in the database. To further narrow the list, add search criteria with the Add Search button. To access the list in your code, use the getUnprocessedDocuments() method to retrieve a DocumentCollection object. Use this object to cycle through the list, processing each document as you see fit.

AgentContext can also be used to access a handful of other agent-specific properties. Use getCurrentDatabase() to retrieve the agent's database. Use getLastRun() to learn when the agent last ran, and getLastExitStatus() to find out how things turned out. The getSavedData() method returns a Document object that you can use to save data between runs of the agent. This special document won't appear in any view. Keep in mind, though, that this document is cleared every time you make changes to your agent.

The last part of the sample code template is an exception handler:

Any errors that happen in the preceding try block cause an immediate transfer to this handler. The variable e contains an Exception object that has been passed, or thrown, from the spot where the error occurs, whether it's in the same method or several methods deep in your code.

The printStackTrace() method writes a snapshot of the event to the Java console, which in Domino Designer can be found in File, Tools, Show Java Debug Console. For example, this method makes an illegal call to Session.createDateTime() :

The throws NotesException clause in the signature tells Java to send NotesException errors back to the calling method. If you don't use a throws clause, your method must handle all possible Notes exceptions.

Calling this method from NotesMain() results in this console output:

The indented lines are the stack trace in reverse order. Parentheses contain the source files and line numbers of each method call. Reading from bottom to top, you can see that NotesThread.run() called AgentBase.runNotes() , which, in turn, called the agent's NotesMain() method. These lines will appear in any agent stack trace.

The good stuff is in the next three calls. First, the makeEntry() method was called from NotesMain() on line 11 of the JavaAgent source file. Then the createDateTime() method was called from makeEntry() on line 21. The exception occurred within createDateTime() because it's the first method listed. The very top line is the exception message, which usually contains more information. This one isn't very helpful.

Unfortunately, exceptions are another area in which Notes strays from the Java way. Most exceptions describe themselves when you call getMessage() , which is what printStackTrace() uses to get the exception message. The NotesException class simply returns lotus.domino.NotesException , which tells you nothing.

Also, most non-Notes exceptions use class inheritance to organize exceptions into hierarchies. For example, Java's FileNotFoundException inherits from IOException , which, in turn, inherits from Exception . This is useful because handlers can be crafted to catch exceptions at any level in the tree. Notes, on the other hand, uses the sole NotesException class for its several hundred possible errors. Because NotesException uses error numbers instead of class types to distinguish exceptions, you must use if statements or switch statements within catch clauses, like this:

Running this example displays the following:

Also, note that catch clauses can be listed one after another. The first clause that matches the exception gets to handle it. Therefore, if a FileNotFoundException occurs in the preceding example, it skips the NotesException handler to the more general Exception handler.