Understanding the Basics of HTML

HTML is a fairly simple structured language used to display documents to a Web browser. Tim Berners-Lee developed it at CERN, the European Laboratory for Particle Physics in Geneva. HTML grew out of SGML, or the Standard Generalized Markup Language, a standard for describing markup languages. SGML began as GML, or the Generalized Markup Language. It was an attempt by IBM in the 1960s to create a standard to port documents across systems. It is generalized because it does not define an exact standard to present or format documents. Instead, it defines document types and different kinds of markup languages that define these document types. The term markup is inherited from the publishing industry and describes the typesetting instructions for formatting a document. GML became SGML in 1986 when it became a standard by the International Standards Organization. The current version of HTML is 4.0, as defined by the World Wide Web Consortium (W3C).

The HTML language is based on tags, which are similar to commands in other languages. Tags define the way elements should be formatted on the screen. Tags consist of a left angle bracket ( < ), a tag name , and a right angle bracket ( > ). HTML is not case sensitive, so the tag

is no different from

Two kinds of tags exist: container and standalone. A container tag can contain text or other tags and has a beginning and an ending tag. Container tags are paired (such as

) to start and end the tag instruction. The end tag looks exactly like the start tag, except that a slash ( / ) precedes the text within the brackets. For example, the following line of code centers text:

This is centered text!

Standalone tags are self-contained. For example,

Tags define and present elements. An element is a fundamental component of the structure of a text document. Some examples of elements are heads, tables, paragraphs, and lists. See the section titled "The HTML Document and Document Tags" for additional details.

Many excellent books and a number of resources on the Web are devoted to HTML. The latest HTML 4 specifications can be found at www.w3.org/TR/REC-html40.

Whenever you launch a Web browser and point it to a World Wide Web site, you are looking at a document presented with HTML. HTML documents themselves are just plain-text files that you can create using any text editor. Most browsers have a menu choice that lets you view the source of a Web document. If you take a look, you can see the raw HTML source. Even though the language itself is fairly simple, it can be a daunting task to create a Web site or even a single HTML document from scratch. Consequently, plenty of editors are available that can create HTML documents. Domino Designer is not exactly like other editors for HTML, but coupled with the Domino server it can essentially become an HTML editor.

The HTML Document and Document Tags

Several tags are always present in HTML documents that essentially define the document. The first tag is always

, and because it is a container tag, the last tag is always . The , , and tags usually follow the tag. A basic structure for an HTML document might be the following:

It is easy to see this structure by viewing the HTML source of a Web document. The database for this chapter, Chapt20.nsf, contains a form titled Simple HTML. It consists of some text at the top and a single field (see Figure 20.1).

Figure 20.1. The window title in this simple form appears in the 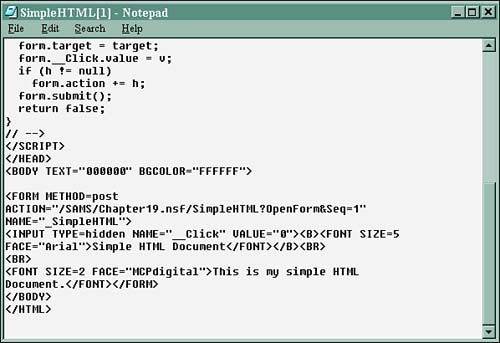 To view the source, first preview the form or a document created with the form in a Web browser. Use the following steps:

The nice thing about using Notes to display the source is that it color-codes the HTML in the same way that LotusScript, JavaScript, and the Formula language are color-coded in the Programmer's pane. Although Listing 20.1 is not in color , it shows the basic elements of an HTML document.

You should quickly notice that Domino has generated all this nice HTML code without any intervention on your part, from a form that took all of a minute or so to create. Typically, you won't have to interact at all with any of these tags; they are generated automatically by Domino for you. Table 20.1 lists commonly used document-level tags.

Once the first code page is successfully processed, the frameset page is called, as shown in Listing 20.5. This frameset code uses JavaScript to maximize the browser's window size, place a welcome note on the status bar, and launch the Web application.

The previous example code goes one step further after maximizing the window by calling a final launch page that is actually a Domino form where the user logs in. As you can see, Domino provides the canvas and tools to create your own not-out-of-the-box applicationyou are limited only by your imagination and time, of course. No matter how you approach your application design, Domino is flexible enough to get it done either by using its defaults, wizards or by allowing you to create your own.

New to Domino 6, Cascading Style Sheets (.CSS files) are treated as a shared resource and provides a category listing for them under Shared Resources on the IDE, as shown in Figure 20.4. They can be easily added to and removed from the database in any text file format. However, .CSS is the standard file extension naming convention developed by the W3C. Style sheets can also be added directly inline on a page, form, or subform; they also can be embedded into the