Framesets originated on the Web as a way to present content from more than one HTML page at a time. Framed Web sites have become quite common lately because you can link one frame within the frameset to the contents of another frame. This technique provides a nice way to navigate a Web site. Although you could work with framesets as early as R4.6, framesets were introduced as a design element in R5.

A frameset splits the client window into two or more frames, similar to a multipaned window on a house. Frames are sections of a window that can present content independently of each other and can optionally display borders or scroll. Each frame can display a different page or design element. Used properly, framesets can enhance your applications considerably and offer several distinct advantages.

Framesets grew out of HTML tables, and, to a certain extent, you could simulate a frameset with a table. Like a table, framesets improve the interface by adding structure to the presentation of your application, including navigational elements that can remain in the same location. In other words, you can combine static content (a set of links) with dynamic content (the pages that the links point to).

One of the biggest advantages to using framesets is that they are available to both Web and Notes clients. For example, in Notes and Domino 6, there is only one mail template, compared to three in R4.6 (one for Notes clients, one for Web clients , and one combining Notes and Web), and it launches directly into a frameset called MailFS (see Figure 10.1). Frames within a frameset can contain documents, folders, pages, navigators, outlines, views, and so forth. Frames can even contain other framesets. For example, the MailFS frameset in Notes and Domino 6 contains framesets inside frames. As you can see, framesets are powerful design elements that are surprisingly simple to use.

Figure 10.1. The Notes and Domino 6 MailFS frameset is launched when a database for both Notes and Web clients is opened. 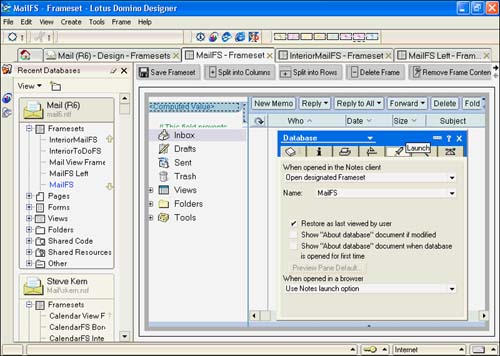