So what is a Web service? Its certainly a popular buzzword, but what does it mean? Well, loosely speaking, the term refers to the capability of computers that are remote from each other to exchange information and messages over the World Wide Web (which well generally refer to simply as "the Web").

As an example, lets say theres a computer out there somewhere on the Internet that knows the current temperature at various points all over the world. If you send that computer a latitude and longitude, in the correct format, the remote computer sends back the nearest current temperature it can find. Such a transaction is shown in Figure 22.1.

Figure 22.1. A desktop PC queries a remote server for temperature data over the Web and receives an answer in XML format. 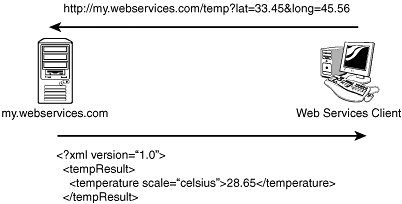 Youll notice a couple of things about this picture. The machine making the request, which weve called the Web Services Client, has sent its request in the form of a URL (a uniform resource locator, the standard way of making a request for content over the Web). And the responding computer has sent the requested information back in a tagged message format that you might recognize as XML.

The important thing about this transaction is that it doesn require any specialized communication protocols to exist between the two machines. The request and response both use standard HTTP, the well-established protocol that powers the entire Web. And the data returned by the server is presented as XMLa standardized and widely accepted way to present data.

So thats our definition: A Web service is a means of exchanging information and messages between two computers, which uses XML data sent over the Web via HTTP. Not all Web services involve sending XML over HTTP. But many do, and its a suitable way to think about Web services for the purpose of working with FileMaker Pro.

Before you can delve very far into how FileMaker works with Web services, though, you need to learn some of the basics of how FileMaker can work with XML data. For the first half of this chapter we discuss how FileMaker interacts with XML, and in the second half, we apply that knowledge to working with actual Web services.