You can use a number of tools for Graph management. For one thing, the small "windowshade" icon at the upper right of a table occurrence can be used to hide the fields in the table occurrence, leaving only the match fields used in relationships. This can save valuable space. If you like to work from the keyboard, (

-T) [Ctrl+T] will cycle through the various table occurrence display states (fully open, key fields only, fully closed). If you use (

-A) [Ctrl+A] to select all objects in the Graph, you can windowshade your entire Graph with a few keystrokes. Figure 7.33 shows a Relationships Graph in windowshade mode.

Figure 7.33. Individual table occurrences can be made into "windowshades" that display only the match fields that participate in relationships. 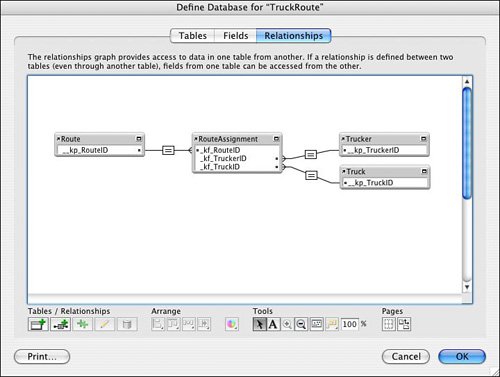 You can also resize an individual table occurrence manually to save space. This, again, needs to be done one table occurrence at a time. It's also possible to zoom out from the Graph as a whole and view it at 75% or 50% of regular size, or smaller.

Figure 7.34 shows a Relationships Graph with table occurrences from both the trucking module and the user module. The trucker tables are colored red here, the user tables are blue, and each group has a "wrapper" of a sort, formed by a note. In addition, in the figure the Graph has been reduced to 75% of its normal size.

Figure 7.34. Use color coding and group naming to help organize the Relationships Graph. 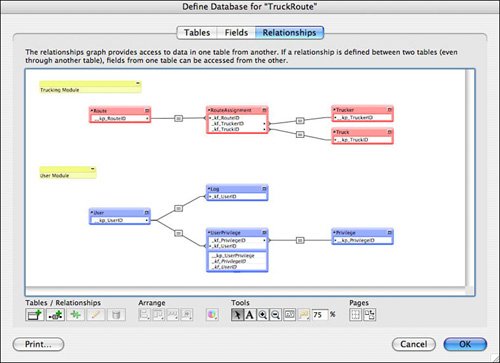 All these techniques can help make your Graph more manageable. Still, if you have a system with a hundred table occurrences, your Graph will be crowded, without question. It's been suggested that offering a list view of relationships as well, in a manner similar to previous versions of FileMaker, would be helpful, and it's possible we may see such a list view in future versions of the product.