For this final section of the book, weve opted to provide for your consideration the standards our own custom development service firm, Soliant Consulting, uses. We do not want to be guilty of thinking that our coding standards are the only ones available, and if the struggle we had internally to arrive at a single standard is any indication, we e very cognizant that other approaches are entirely valid and effective. The important point in all of this is to adopt a standardany standard. On the other hand, we felt that a chapter on documentation and standards would be incomplete without presenting at least one concrete set.

Please know these standards are presented largely in their day-to-day undigested form without a great deal of exposition or details on the rationale behind the choices we and our organization made.

If you are interested in learning more about FileMaker standards, or in delving further into an excellent exploration behind why some of these decisions have been adopted, we strongly recommend you read the document that FileMaker Inc. itself has published on the topic (available free as a PDF download). To get to the FileMaker Development Conventions, go to the following site:

The authors of this book participated in the development of the FDC tech brief and believe that it serves as a comprehensive guide to standards in FileMaker.

Furthermore, in these standards we present the "Anchor Method" of managing the Relationships Graph in FileMaker. Roger Jacques, the initial creator of this approach (and a senior manager at Soliant), published an article, "Managing the FileMaker Pro 7 Relationship Graph," explaining the thinking behind the method in the September 2005 issue of FileMaker Advisor Magazine. An electronic version of that article is available, along with archives of all the magazines articles, as a subscription service on the FileMaker Advisor website:

We recommend that you include a copy of whatever standards youve used with a given solution so that a new developer to the project can review them if you are unavailable for whatever reason.

These conventions are compliant with version 1.0 of the FDC standards published November 1, 2005.

All conventions in this section are required in order for a file or files to adhere to the Soliant coding and development standards.

We encourage liberal script comments, but these are the minimum requirements:

Figure 27.7. An example of a typical TOG, with the Anchor TO leftmost on the graph.

Figure 27.8 shows the same information thats included in the list of TO names used in a number of dialogs within FileMaker. Note that they order themselves hierarchically just as they appear on the Relationships Graph.

Figure 27.8. In dialogs that list TO names, this naming convention maps to the same organization that exists on the Relationships Graph. 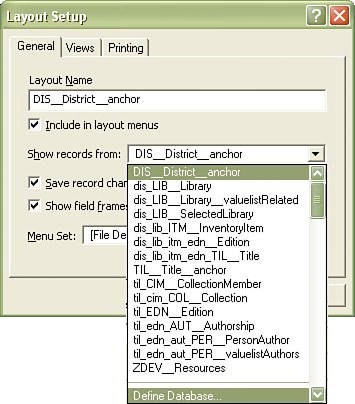 The name of a TO describes the chain of source tables between the anchor and the TO itself, with optional attribute indicators. The attribute indicators can be functional names, names of keys, or any other means of clarifying the purpose of the TO. The ability to read a chain of TOs in both the graph and the various pop-ups and dialogs lends clarity. By reading the name of a single TO, one should be able to grasp where on the Relationships Graph it sits.

These are the rules that govern TO naming:

The conventions in this section are not mandated, but they provide some standard ways of doing certain things, if you choose to do them.

Keep your names as short as reasonably possible. Some dialogs are still width-restricted in FileMaker on Windows.

We use InterCaps for multiple words. Underscores are meant to differentiate between elements of a field (or table) name; however, user fields make an exception to that rule, where effort should be made to support ease of reading for end users.

Scripts may be subdivided into functional groups and separated by a header. Additionally, insert a single hyphen to appear as a separator. For example:


Spaces are acceptable in script names. Keep in mind that on Windows, some dialogs open only to approximately 4050 characters.