Most programming and development environments give you some way to add comments to a system. Comments are descriptive information that you, the developer, supply throughout the system to clarify the meaning and usage of programming constructs. When commenting your work, try to keep two goals in mind: explaining why something exists or does something, and describing what the expectations around it are. Answer the questions "What goes in?" "What comes out?" and "Whats its purpose?"

The Define Database dialog allows developers to add comments to fields. Each comment can be up to 30,000 characters in length. The selected fields comment is displayed under the field name. View all comments by clicking the Options/Comments column header at the top of the field list. Field comments are included in the Database Design Report (covered later in this chapter) and are also accessible via the Get ( FieldComment ) function. Figure 27.1 shows an example of field comments.

Figure 27.1. Field comments can be displayed in the Fields tab of the Define Database dialog. 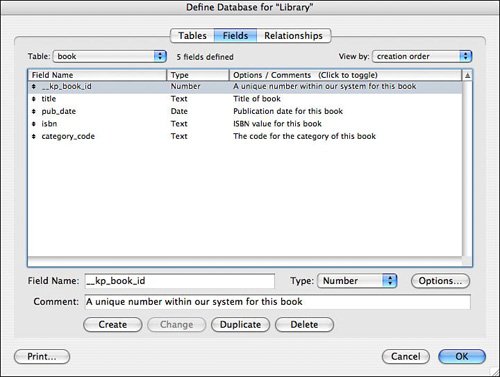 Heres a real-world example of a script that runs the first time a user opens the database. It represents what wed consider good commenting:

Accounts, privilege sets, and extended privileges can each have associated descriptions. Enter a description when defining these items in the Define Accounts & Privileges dialog box. Up to 30,000 characters may be included for each. The descriptions appear in their respective lists and are also included in the Database Design Report.

Figure 27.2. Be certain to add descriptions to privilege sets; this information is helpful within this dialog and in the Database Design Report. 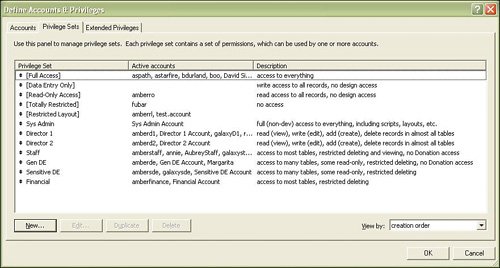 Interprocess Communications in Linux: The Nooks and Crannies
A+ Fast Pass
SQL Hacks
Service-Oriented Architecture (SOA): Concepts, Technology, and Design
Oracle SQL*Plus: The Definitive Guide (Definitive Guides)
Lean Six Sigma for Service : How to Use Lean Speed and Six Sigma Quality to Improve Services and Transactions
Flylib.com © 2008-2020.
If you may any questions please contact us: flylib@qtcs.net
Privacy policy
This website uses cookies. Click here to find out more.
Accept cookies