Among the many important features of FileMaker, the capability to have multiple windows showing data from the same table stands out as one of the most important. To aid developers with managing this feature, several window management script steps are present in ScriptMaker, including the following:

There are also 11 Get functions that return data about the active window, ranging from its size and location to its name and the mode it's in. Another function that plays a role in window management is WindowNames, which returns a list containing the names of all the open windows, ordered according to the stacking order of the windows.

These script steps and calculation functions provide you with tremendous ability to control the user experience. The amount of window management you do may vary widely from solution to solution, but having a good grounding in the options available to you is important.

The Anatomy of a Window

When you create, move, and resize windows, you have the opportunity to specify both a location for the window and its size. The unit of measure for all window manipulation is the pixel. Figure 15.6. shows the options for the Move/Resize Window script step.

Figure 15.6. The Move/Resize Window script step enables you to specify the exact coordinates (in pixels) and size for any given window. 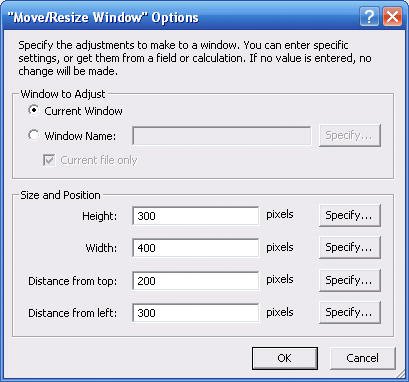 For each parameter of the Move/Resize Window script step, you can either specify a literal number or supply a calculation formula whose result determines the parameter's value. If you leave any of the parameters empty, their values are inherited from the current active window. For instance, if you merely want to move the current window (without changing its size), you don't need to specify anything for the Height and Width parameters.

Before you start creating and moving windows around the screen, however, it's important that you have a good understanding of the anatomy of a window. When you specify the Distance from Top value for a new window, for instance, is that the distance from the top of the screen, or from the top of the application window? Is it the distance to the window's title bar or to the layout itself? These are the types of questions this anatomy lesson answers.

Working from the outside inward, there are four important objects for managing windows. These are the screen, the desktop, the window, and the content area.

The screen is the backdrop against which all window actions take place. Screen resolution can, of course, differ from user to user. You can use the Get (ScreenHeight) and Get (ScreenWidth) functions to return the absolute height and width (in pixels) of the user's screen.

On a Macintosh, the top menu bar, which is 22 pixels high, is not considered part of the application window. The desktop height, therefore, is 22 pixels smaller than the screen height. The desktop and screen widths should be identical.

The desktop size is slightly more complicated on Windows because an application can be maximized to fill the screen, or it can float free in its own window space. The two desktop functions return the inside dimensions of the application window. The application title bar and the FileMaker menu bar are not considered part of the window desktop on Windows. Scrollbars on the right and bottom of the application, however, are considered part of the window desktop. If you fully maximize FileMaker on Windows XP, and if the taskbar has its default size and location at the bottom of the screen, the desktop height is 80 pixels less than the screen height. That includes 46 pixels for the application title bar and menu bar and 34 pixels for the taskbar.

Be aware that the dimensions are slightly different in Windows 2000/2003, and that many system settings can affect the exact pixel sizes for various screen elements. It's best to test on your own system.

You cannot programmatically set the dimensions of the desktop area, nor can you determine the placement of the desktop relative to the screen (which is interesting only on Windows when the application is not maximized).

The next type of object to discuss is the window. This is finally where you, as the developer, get to have some control over things. You can set the size, placement, and name of windows on the screen through various script steps. The size of the active windowits outside dimensionscan be obtained with the Get (Height) and Get (Width) functions. These dimensions include both the window's frame and its content . These concepts are discussed in depth later in this section.

When you position a window on the screen, you specify, in effect, the coordinates for the upper-left corner of the window. These coordinates are not relative to the overall screen dimensions. They are mostly relative to the window desktop. We say "mostly" here because a window positioned 0 pixels from the top and 0 pixels from the left is placed at the upper-left corner within the application window. If there are no active, docked toolbars, this window's position would, in fact, be relative to the window desktop. It's the potential presence of docked toolbars (either the Standard toolbar or the Text Formatting toolbar) that muddies the waters. Each of those can move the absolute position of (0,0) either downward or to the right, depending on where the toolbar is docked. Docked in the standard position at the top of the screen, each toolbar takes up 26 pixels on Mac and 27 pixels on Windows XP. The toolbars do not affect the size of the desktop area.

On Windows, a user may choose to use normal, large, or even extra large fonts under the display properties. The status bar does not change size, but the window and application title bars both increase in height dramatically. You should be aware that the pixel sizes for various objects provided here are not true constants.

The size of the window's frame differs slightly on Mac and Windows. And because you specify window size, not content size, when creating or resizing windows, this means that to display a fixed content size, you need to use a variable window size.

On Macintosh, a window's title bar takes up 22 pixels, and its left and bottom scrollbars are each 15 pixels thick. If the status area is visible, this adds 69 pixels to the window's frame.

Positioning a Window Relative to Another Window

One common window manipulation routine involves having a new window pop up at a position on the screen relative to another window. This technique can make for very effective user interface management. Even if users move a window to another part of their screen, your pop-up window appears in the same position relative to the window that called it.

The example discussed in this section is an expansion on the window pop-up technique discussed in the "Rich Dialog Windows" section of Chapter 13, "Advanced Interface Techniques." Refer to that section for more information on how to make the pop-up window behave like a modal dialog.

Figure 15.7 shows a layout from a basic contact management system; the portal at the bottom is used to collect notes associated with a particular contact.

Figure 15.7. A contact info layout with a portal into a Notes table becomes the anchor for a pop-up window. 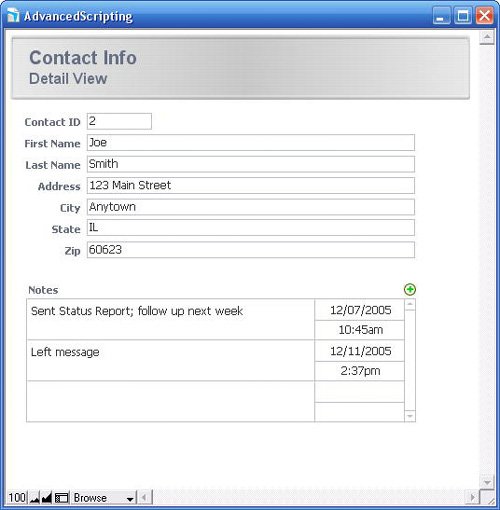 Imagine that you want to create a workflow where users are not allowed to add new notes directly from the portal. Instead, you would like a pop-up window to appear in front of the portal when users click the Add Note button, regardless of where a user has positioned the contact info window. The end result of this is shown in Figure 15.8.

Figure 15.8. The Add Note window is positioned in front of the portal on the Contact Info layout, regardless of where that window has been positioned on the screen. 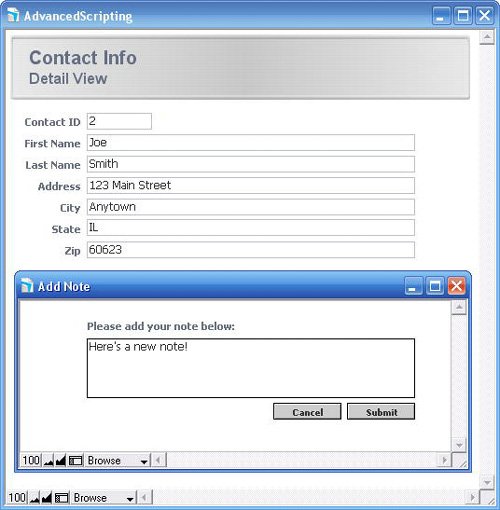 Begin by creating a layout that contains the desired interface for the pop-up window. Use a rectangle (of any color) as the background for this layout. It's important that you use an actual rectangle rather than just changing the color of the layout part because the size of this rectangle determines the size of the pop-up window. Position the rectangle so that it's snug against the top and left borders of your layout. In the example shown in Figure 15.8, the background rectangle on the Add Note layout measures 463 pixels wide by 163 pixels high. Your layout should contain only a body part, and you should shrink the body up right to your background rectangle.

After the pop-up layout has been created, copy the background rectangle to your clipboard, switch over to the anchor layout (here, the Contact Info layout), and paste the rectangle onto this layout. Position it exactly where you want the pop-up window to be placed. Turn on the Object Size dialog (View, Object Size), and make a note of the top and left coordinates of the rectangle. In the example shown in Figure 15.8, these positions were 290 and 15, respectively. You can then delete the rectangle from your layout.

The values for the top and left pixel of an object returned by the Object Size dialog are relative to the page margins that have been defined for your layout. The margin settings can be set explicitly on the Printing tab of the Layout Setup dialog. If you want to know the absolute position of an object, set the top and left margins to both be 0. Or subtract the top and left margin settings from the values you noted in the Object Size dialog. Your goal is to know the position of the rectangle relative to the current window, so the margins, which aren't even visible in Browse mode, must be factored out.

Taking all these factors together, the parameters you need for your new window are as listed here:

You'll notice that the constants at the beginning of each of these formulas come from the size and position of the pop-up window that were noted earlier. The other constants in these formulas (the ones that were determined by checking whether the user is on a Mac or a Windows PC) are needed to translate from content size to window size. Recall from the preceding section that the size of the window's frame is different on each platform. The preceding calculations also make an assumption that the status area will be hidden in both the anchor window and the pop-up window. If that's not the case, you can easily adjust by adding and/or subtracting 69 (the width of the status area) to the width and distance from left values as necessary.

If you plan to use pop-up windows often, consider creating custom functions for these formulas. You can have them adjust appropriately, based on platform and the visibility of the status area.

The remainder of the scripts used for the Add Note routine closely resemble those discussed in the "Rich Dialog Windows" section of Chapter 13.

The Add Note script itself is as follows:

There are many ways you could script the actual addition of the note record. This example navigates to a layout based on the ContactNote table. Because the user entered the new note into a global field, after the new record is created, the ContactNotes::Note field can be directly set to the value of the gNote field. However, the ContactNotes::ContactID field, which is a foreign key relating back to the Contact table, needs to be set to the ContactID of whatever the active record was at the beginning of the routine. It could simply be placed in a field with global storage, but instead, we've elected to have the Submit button pass the ContactID as a script parameter to the Submit Note script.