FileMaker Extra Complex Many to Many Relationships

Most of the examples in this chapter involved fairly simple, commonly found data modeling problems. But in the real world, matters can get quite complex. Some problems are hard to model in the language of relational databases. Others involve concepts you've already seen, but in more complex forms.

Let's say you've been asked to sketch out a database system for a trucking company. The company needs to track which drivers are driving which trucks, and where they're driving them. After some thought, you decide you're dealing with three entities: Driver, Truck, and Route. A route consists of a start location, a destination, and a number of miles driven.

A first sketch of the system might look as shown in Figure 5.21.

Figure 5.21. The initial ERD for a trucking system.

Figure 5.22. The trucking-system ERD with the many-to-many relationships resolved. 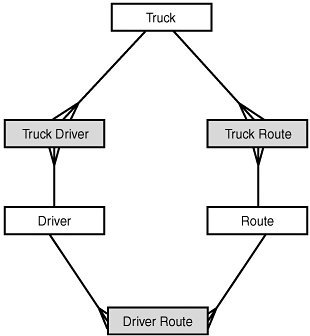 Let's say that the trip starts on Monday and ends on Wednesday and you want to record that fact. With three join entities, where do you put that data? In theory, you'd need to put it into each of the three join records. That amounts to repetitive data entry, and in relational database modeling, a design that promotes redundant data entry is usually a sign that something's not quite right.

One clue is that these three associations (truck-driver, truck-route, driver-route) are not independent of each other. They all happen at the same time. When a trucker drives a truck from point A to point B, all three associations happen at once. Why not put them all into just one record? That's the right answer, as it turns out, and it implies the structure shown in Figure 5.23. 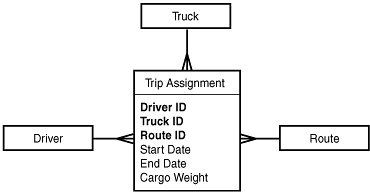 What you're dealing with here is not three many-to-many relationships, but a single "many-to-many-to-many" relationship. This kind of structure is sometimes referred to as a star join. The central entity in a star join (which in the example stores information about the associations between a truck, a driver, and a route) is sometimes called a fact table. If you see a number of join entities in your diagram that are "symmetrical," as they are here, and seem to capture different pieces of the same data, you might want to think about whether you have a star join of some kind on your hands.