Working with Data from Distant Tables

The relational model of FileMaker 8 has significant power in its capability to handle a relational tree. As an example, suppose that you have a classic Customer-Product-Invoice system with a Relationships Graph like the one shown in Figure 7.24.

Figure 7.24. Relationships Graph for a system that tracks customers, products, and invoices. 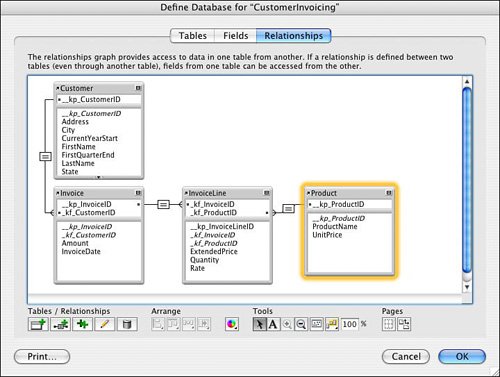 You might want to do a number of things in this system that would have been slightly cumbersome in versions of FileMaker prior to FileMaker 7. Suppose, for example, that you'd like a portal on a customer layout showing all the products that customer had ever purchased. Previously, you might have used a somewhat complicated technique involving global fields and the Copy All Records script step to "hop" from a customer record to the customer's related invoices, and then again from the invoices to their related line items, and finally from the line items over to products. Scripting this process was relatively slow, and the technique was not guaranteed to work for large data sets.

By contrast, in FileMaker 7 and 8 it's as simple as creating a portal on the Customer layout and choosing the Product table occurrence as your data source. FileMaker correctly navigates the Relationships Graph from Customer to Product and brings you back a listing of all products ever purchased by a given customer. Although this is somewhat difficult to illustrate concisely (we'd need to show the intervening invoices), Figure 7.25 shows what the result might look like. Even though some of the products have been entered on several invoices for this customer already, each one appears only once, as you would expect.

Figure 7.25. FileMaker 8 lets you perform a deep relational view, allowing you to display, for example, all products a customer has purchased in a given year. 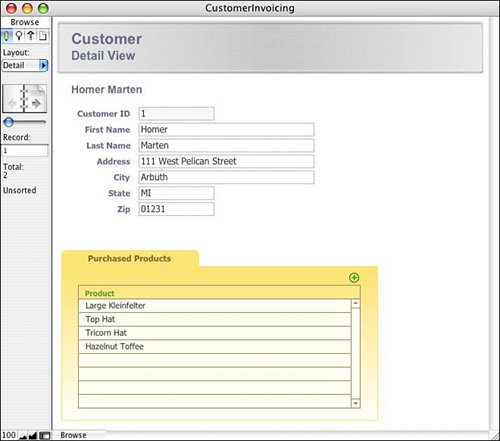 The technique could be reversed. For example, from the viewpoint of a Product record, you could just as easily see a portal of all customers who had ever purchased that product.

This capability to perform multistep relational navigation in a single swoop is a powerful feature of FileMaker. Combined with some of the multimatch and non-equijoin relationships you saw earlier, this technique can produce quite sophisticated queries. Think back to the example that used a relationship to isolate a customer's invoices in the first quarter. Well, if those invoice records eventually contained a link back to a products table, you could use a deep relationship (as we sometimes call them) to produce a portal of just those products purchased by a given customer in the first quarter.