The Filter and FilterValues functions, introduced in FileMaker 7, are nifty tools for complex text comparison and manipulation. The following sections provide an example of each of them.

The syntax for the Filter function is as follows:

The Filter function is useful anytime you want to constrain the domain of possible characters that a user can enter into a field. The most common use of Filter, therefore, is as part of an auto-entry calculation for text fields. Figure 14.18 shows the auto-entry options dialog for a field called Phone. Note that the option Do Not Replace Existing Value of Field (If Any) has been unchecked. What this means is that the auto-entry calculation isn't triggered only when the record is created, but also when the Phone field is modified. Essentially, this means that whenever a user modifies the Phone field, his entry is replaced immediately by the result of the calculation formula specified.

Figure 14.18. The Filter function is often used as part of the auto-entry of a calculated value. 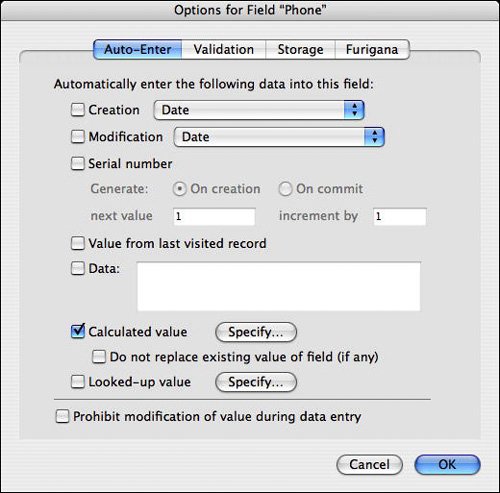 You can use the Filter function as part of the auto-entry calculation for the Phone field to remove any non-numeric characters that might have been entered by the user. The nice thing about the Filter function here is that you don't need to anticipate all the incorrect things a user can enter (text, punctuation, spaces), but rather, you can specify what the acceptable characters are. The actual function you use to reformat the user's entry in the Phone field depends on your needs and preferences, but one option would be the following:

The formula starts by stripping out any non-numeric characters from the user's entry. Then, if the length of the remaining string is either 7 or 10, the number is formatted with punctuation and returned to the user. If it's not, the function shows the user an error message, complete with the original entry presented in bold text.

Figure 14.19. The FilterValues function returns a list of all the items of Set A that are also in Set B.

FilterValues comes in handy anytime you want to see whether two lists contain any of the same elements. For instance, if you've defined any extended privileges as part of your security settings, you can see a list of all the privileges that have been granted to the current user with the Get (ExtendedPrivileges) function. If you have some routine that only users with PrivSetA or PrivSetC should have access to, you can use the formula FilterValues("PrivSetA¶PrivSetC"; Get (ExtendedPrivileges)). If the result is not empty, the user has at least one of those two privilege sets.

As another example, imagine that you are a third-grade teacher and that you have just given your students a 10-question True/False test. Rather than setting up a related table for their answers, you've just entered all their responses into a return-delimited text field. By also putting the answer key into a global text field, you can use the FilterValues function to determine the number of correct answers each student had. Figure 14.20 shows how this might look when you're finished. The formula for the NumberCorrect field is the following:

Figure 14.20. By using the FilterValues and ValueCount functions, you can count how many items in one array are contained within some other array. 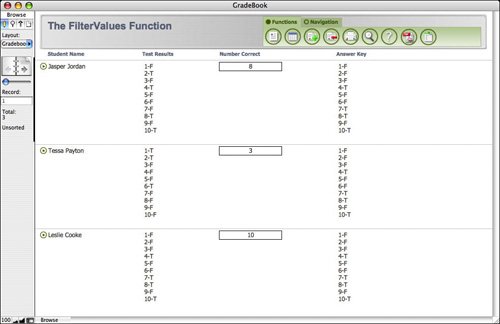