In versions of FileMaker Pro before version 7, there was no way to affect the display of a field (that is, color, size, font, style) via calculation formulas. Developers had to come up with workarounds for seemingly simple tasks, such as having the contents of a field change color based on some conditional test. For example, a typical workaround was stacking two calculation fields on top of one another, each formatted with a different text color on the layout, and then having a conditional test in each turn it "on" or "off" to simulate the effect of the text changing color.

In FileMaker Pro 8, nine text formatting functions obviate the need for many of these old workaround options. They are each discussed in detail in our FileMaker 8 Functions and Scripts Desk Reference, but here we demonstrate some examples of how and why you might use these functions.

The TextColor, TextFont, and TextSize functions are quite similar. The first parameter of each is the text string you want to act on; the second parameter contains the formatting instructions you want to apply.

For example, perhaps you have a Tasks table, and you want to have any tasks due within the next week be displayed in red. To accomplish this task, you would define a calculation field called TaskDisplay with the following formula:

The TaskDisplay field displays the task name in either red or black, depending on the due date.

The next two text formatting functions are TextStyleAdd and TextStyleRemove. Each of these takes two parameters. The first is a text string to act on; the second is a style or styles to apply to the text string. If listing multiple styles, you need to separate them with a plus sign (+). The style names are keywords and should not appear in quotes. They also must be hard-coded in the formula; you can't substitute a field that contains style instructions. The valid styles for both TextStyleAdd and TextStyleRemove are listed here:

For most of these functions, you can specify an optional second parameter that specifies exactly what value you want to remove. For example,

will remove all text sizing from text, causing all of text to return to whatever text size was specified for the field in Layout mode, whereas

TextFormatRemove, as mentioned, is the exception to this pattern. TextFormatRemove takes just one parameter, the text string to be reformatted, and strips all formatting from the field.

There are many practical, everyday uses for the text formatting functions. For instance, you might have a database where you've tracked books and articles pertaining to a research project. You could define a field called BibliographyDisplay that performs the appropriate bibliographic formatting of the data elements.

Another use is to create tools so that users can highlight and format field data without using the built-in menu commands. For this example, imagine that you have a simple layout with three text fields on it called Text1, Text2, and Text3. The end goal is to add buttons to the layout that perform some formatting action on a text snippet selected by the user, no matter in which field the user has highlighted a selection. For the example, the formatting options are limited to Bold, Underline, and Red, but you'll easily be able to extend it to perform any formatting you require. Believe it or not, you can do this with a single, one-line script!

Figure 14.15 depicts the layout, buttons, and some sample text. For now, the buttons don't do anything.

Figure 14.15. Users can highlight a section of text in any field on the layout and use the buttons at the top of the screen to format their selections. 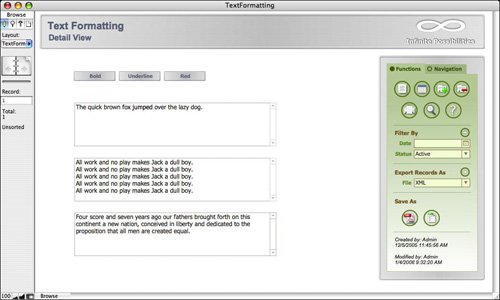 The script that does the formatting is called Apply Format. Its single step will be a Set Field. Normally with Set Field, you specify the field you want to alter. However, with the field unspecified, the currently selected field, where the user has highlighted some text, is affected. The formula needed to actually do the formatting is as follows:

The three buttons each use a script parameter to pass in a formatting request, enabling you to use this single script to do any and all formatting. Notice also that Get(ActiveFieldContents), Get(ActiveSelectionStart), and Get(ActiveSelectionSize) are used to identify and isolate the snippet highlighted by the user. Then the appropriate formatting is applied to that snippet, and the Replace function is used to swap it into the old text.

Figure 14.16 shows the results after some formatting has been performed on the three text fields.

Figure 14.16. A single, one-line script is used to format the user's selection appropriately. 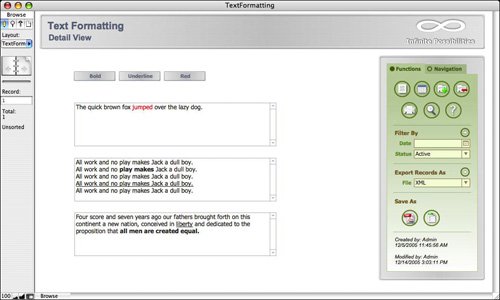 Even though the example is complete as it stands, you might want to add a nice additional bit of functionality to the Apply Format script. Currently, after the formatting is applied, the user's selection is no longer highlighted. If the user wants to perform multiple format operations, such as bold and red, she needs to manually rehighlight the desired text. Alternatively, you can use the Set Selection script step to leave the user's selection highlighted. The Set Selection script step needs to know three things: in what field to operate, what character number should start the selection, and what character number should end the selection. Just as with Set Field, if you don't explicitly specify a field on which to act, the currently selected field is used, which is exactly what's desired in this case. For the start and end positions, you can use the Get(ActiveSelectionStart) and Get(ActiveSelectionSize) functions. The problem is that in reformatting the field, those values are lost. Therefore, you need to capture those two values at the very beginning of the script in some way you can refer to later. One way to do this would be simply to create two global number fields (one for each value), but because we're discussing interesting applications of functions, let's look at a method for storing and passing both values as part of a single global text field. As the first step of the Apply Format script, add a Set Field that sets a script variable ($selectionParams) to the following:

What we've done here is captured the two values in which we're interested, in a format that can be dropped into the middle of a Let function and evaluated with the Evaluate function.

As the final step of the script, the Set Selection script step needs to be told the starting and ending positions of the selection. The starting position would be "unpacked" from $selectionParams by the following formula:

The wonderful thing about this method is that you can pass any number of variables quite easily. When unpacking it for later use, you simply swap in the appropriate variable at the end of the Evaluate function.