To publish databases to the Web via IWP, you need to enable and configure IWP on the host machine, and you need to set up one or more database files to allow IWP access. Each of these topics is covered in detail in the sections that follow. 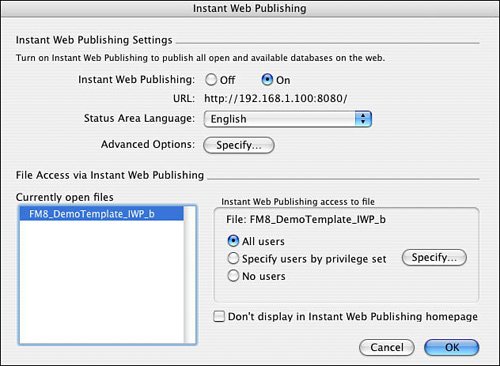 Turning Instant Web Publishing on and off is as simple as toggling the Off/On selection. Selecting On enables this particular copy of FileMaker Pro to act as an IWP host. You can choose the language that will be used on the IWP Database Homepage and in the status area. You can also configure a handful of advanced options, as shown in Figure 21.5. 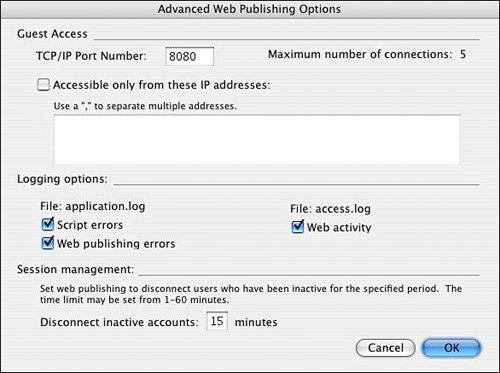 By default, IWP is configured to use port 80 on the host machine. If another application, such as a web server, is already using that port, you see an error message and are asked to specify a different port to use. FileMaker, Inc., has registered port 591 with the Internet Assigned Numbers Authority (IANA), so thats the recommended alternative port number. The only downside of using a port other than 80 is that users need to explicitly specify the port as part of the URL to access IWP. For instance, instead of typing 127.0.0.1, your users would need to type 127.0.0.1:591 (or whatever port number you specified).

If you are using Mac OS X, you may be asked to type your computers pass phrase if you attempt to change the port number when configuring IWP within the FileMaker client.

If you don set IP restrictions, anyone in the world who knows the IP address of your host machine and has network access to it can see at least the IWP Database Homepage (which lists IWP-enabled files). And if youve enabled the Instant Web Publishing extended privilege on the Guest privilege set, remote users could open the files as well. This is, of course, exactly the behavior youd want when IWP is used as part of a publicly accessible website.

The access log records all IWP activity at a granular level: Every hit is recorded, just as youd find with any web server. As a result, the access log can grow quite large very quickly, and there are no mechanisms that allow for automatic purging of the logs. Be sure to check the size of the logs periodically and to prune them as necessary to keep them from eating up disk space. (A knowledgeable system administrator can configure both Windows and Mac OS X to periodically trim or rotate logs to prevent uncontrolled log growth.)

Each of the two logs can be read with any text editor, but you may find it helpful to build a FileMaker database into which you can import log data. It will be much easier to read and search that way.

The final option on the Advanced Web Publishing Options dialog box is the setting for the session disconnect time. As mentioned previously, IWP establishes a unique database session for each web user. This means that as a user interacts with the system, things such as global values, the current layout, and the active found set are remembered. Rather than just treating requests from the Web as discrete and unrelated events, as was the case in previous incarnations of IWP, the host maintains session data on each IWP user.

Because only five sessions can be active at any given time when FileMaker Pro is being used as an IWP host, its important that sessions be ended at some point. A session can be ended in several ways:


Clicking on the house icon in the status area to return to the Database Homepage does not end a session. If a user reenters the file from the Database Homepage without ending his session, he returns to exactly the same place he left, even if a startup script or default layout is specified for the file. 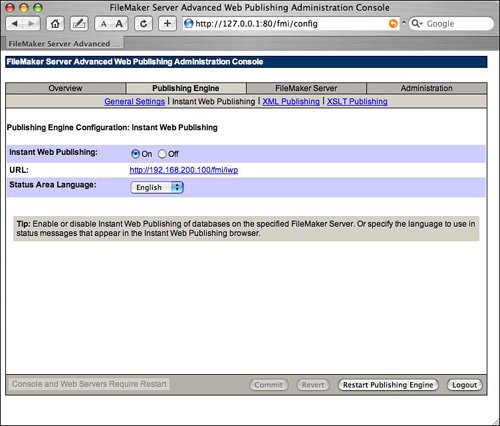 On the General Settings page, as shown in Figure 21.7, you can specify logging and session disconnection settings. These are analogous to their FileMaker Pro counterparts, which were discussed in depth in the preceding section. Refer to that section if you need additional information about what is contained in the logs or the significance of the session disconnection setting. The logs are written as text files in the following directory on the web server:

Figure 21.7. Logging and session disconnection options are specified on the General Settings page. 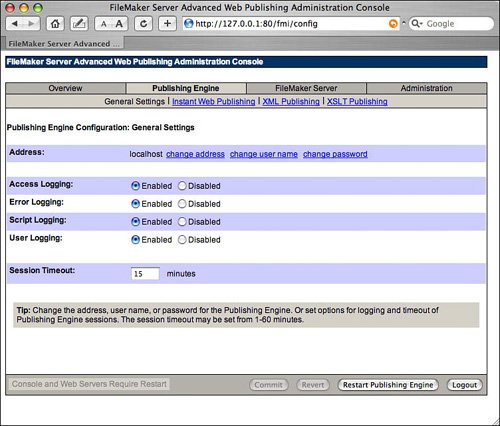 Figure 21.8. WPAC lists all the web-accessible databases on the server, but you don need to do any configuration here at the file level to allow something to be shared to IWP. 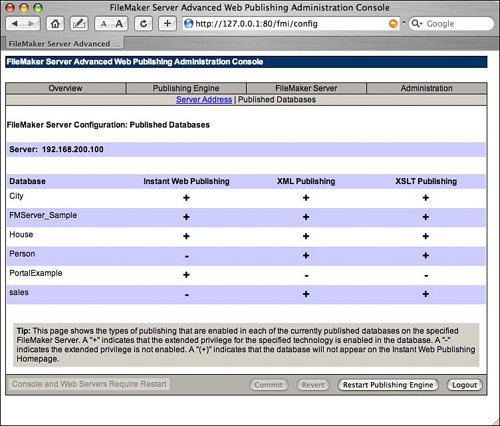 If you want a file to be accessible via IWP, but not to show up on the Database Homepage, you need to open the file with FileMaker Pro (open it directly, that is, not simply as a guest of FileMaker Server) and go into the Instant Web Publishing configuration screen. After you are there, select the file and then check the Don Display in Instant Web Publishing Homepage check box. You do not need to actually enable IWP or add any extended privileges to privilege sets to have access to this setting.


Sharing and Securing Files via IWP

Security for Instant Web Publishing users is managed the same way its managed for FileMaker Pro users: via accounts and privileges. Accounts and privileges also dictate which database files are accessible via IWP. To be shared via IWP, a particular file needs to be open, and one or more privilege sets in that file needs to have the fmiwp extended privilege enabled. This is true regardless of whether you plan to use FileMaker Pro or FileMaker Server Advanced as the web host.

You assign the fmiwp extended privilege to a privilege set in any of three ways:

To assign extended privileges in any of these ways, a user must be logged in with a password that grants rights to Manage Extended Privileges.


The other sharing option you can configure on the Instant Web Publishing setup screen is whether the database name appears on the Database Homepage. In a multifile solution, you may want to have only a single file appear there so that users are forced to enter the system through a single, controlled point of entry.

Any changes made in the sharing settings and privileges for a file take effect immediately; you do not need to restart FileMaker or close the file.


When users type the IP address (or domain name) of the IWP host in their browsers, the first thing theyll see is the IWP Database Homepage, an example of which is shown in Figure 21.9). The Database Homepage lists, in alphabetical order, all files on the host machine that have at least some privilege sets with the fmiwp extended privilege enabled. The Database Homepage cannot be suppressed, though it can be customized or replaced, as explained later in this chapter.

Figure 21.9. The Database Homepage provides users with a list of accessible files. 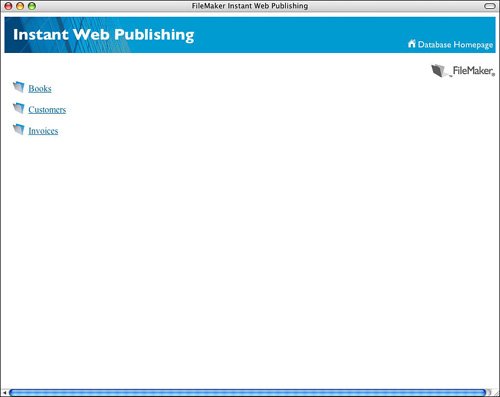 Users aren prompted for a password on their way to the Database Homepage. The password prompt occurs (unless you are logged in as a guest, as described in the following bulleted list) when users first try to interact with a database. IWP now uses an HTML forms-based interface for entering a username and password. To be authenticated, users must enter an active, valid username and password, and their accounts must be associated with a privilege set that has the fmiwp extended privilege enabled.

You should know a number of things about how accounts and privileges are authenticated under IWP:

You can create a script that uses the new account management script steps to create your own customized login routine. Users would use Guest privileges to get to your login screen, and then your script would use the Re-login step to reauthenticate them as different users.


After a user is authenticated as a valid user of the file, that users privilege set then controls which actions can be performed, just as it does for users of the FileMaker Pro desktop application. Field and layout restrictions, record level access, creation and deletion of recordsall of these are managed exactly the same for IWP users as for FileMaker Pro users. The capability to make use of this unified security model is truly one of the best features of FileMaker IWP and makes it much simpler to deploy robust and secure IWP solutions.


You will likely want to restrict your IWP users to some set of IWP-friendly layouts. If you have users who sometimes access your file via FileMaker (when they e in the office) and sometimes via IWP (from home), consider setting up two separate accounts for those people: one that has the fmiwp extended privilege and one that doesn .