Importing Photos from a Digital Camera

In Mac OS X, FileMaker is able to import photos from a digital camera, or a similar device such as a memory card reader. This procedure is fairly thoroughly covered in the manual, so we'll be content with a brief overview.

If you choose File, Import Records, Digital Camera on Mac OS X, with a compatible digital device connected to the computer and powered on, you'll see the dialog box shown in Figure 19.14. Here you'll have the opportunity to specify which photos you want to import from the camera or device, as well as the choice whether to import entire images or just image references. (See the earlier section titled "Images or References?" for details.)

Figure 19.14. FileMaker has a variety of options for importing from a digital camera. 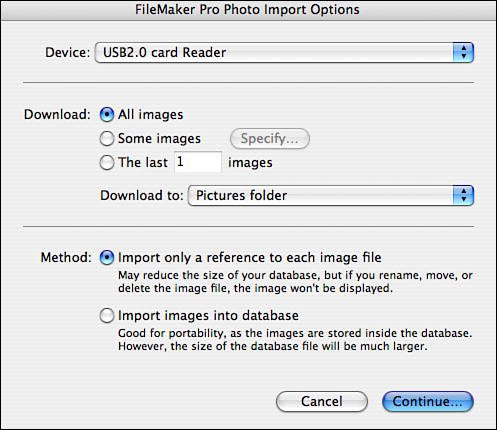 If you choose the option to Specify Images in this dialog box, not only will you be able to select individual images for import, but you'll also be able to specify whether imported thumbnails should be small, medium, or largean option that's not available when importing many images from a folder.

After you've decided on which photos to import, and whether to import them as images or full references, you'll proceed to the standard Import Field Mappings dialog. Just about everything here is as you expect it, but there's one possible difference, as you can see in Figure 19.15.

Figure 19.15. FileMaker can read and import EXIF data from a digital camera, in addition to the regular filename and path and image fields. 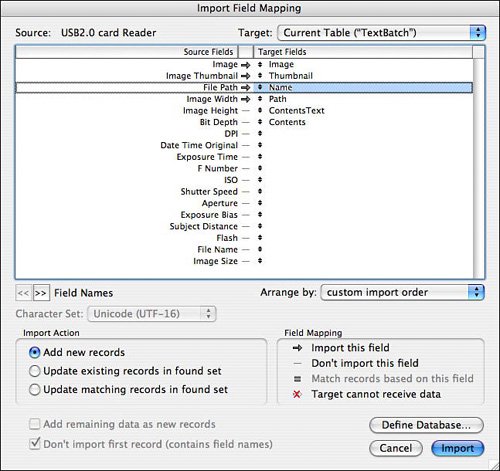 If the images you're importing contain EXIF (Exchangeable Image File) data, FileMaker can read and import that data as well. This data can include information such as the time of day, shutter speed, aperture, and film speed for the images, as well as many other pieces of data. The photos being imported in Figure 19.15 do contain EXIF data, as the long list of source fields shows; any or all of these fields are available for import. Many digital cameras capture EXIF data with each image.