What s New in FileMaker Pro 8

FileMaker, the database product, has been around since 1985, and has evolved a great deal since its inception. It is fully relational, offers both development- and user-level support in a single application, is completely cross-platform compatible, and takes advantage of a modern security architecture.

The following is a brief list of the major changes and new features in FileMaker 8.

Version 7 was a major architectural shift for FileMaker, and many of the changes from prior releases of the platform represent critical issues that all current developers must know. To present a complete picture of FileMaker, the following section reviews, and compares to prior versions, the new architectural structure introduced in FileMaker 7 and extended in FileMaker 8.

Along with the FileMaker 7/8 file format come some dramatic benefits. One favorite is the significantly improved stability of files, leading to far less corruption when systems suffer crashes. Also, developers can now make changes to everythingfield definitions, table definitions, access privilegeswhile the database is being hosted with guests logged on. This extends the flexibility of the platform even further.

Figure 1.3. This Relationships Graph shows two occurrences of the Person table, each with a different relationship. 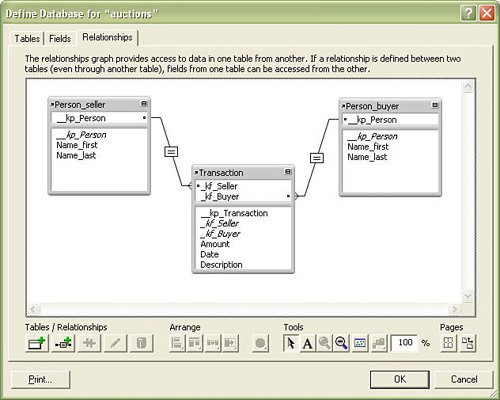 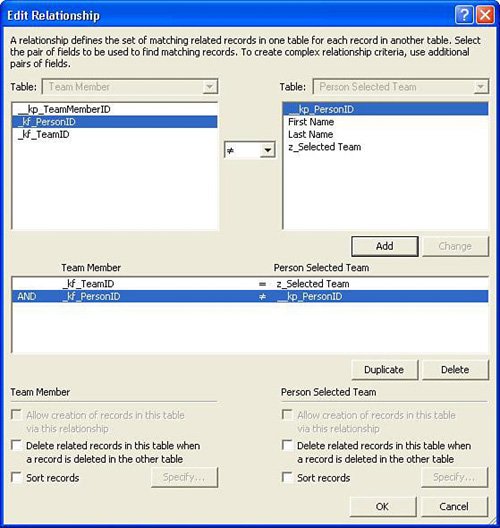 FileMaker 8 supports a centralized, modern security architecture in which accounts and privileges may be changed while a system is live. System behaviors are grouped into privilege sets; each account is associated with a single privilege set, ensuring that all users have their own accounts and passwords while sharing access levels with their peers.

Extended privileges serve as an additional feature that allows developers to define custom privilege settings. In scripts and calculations, a developer can test for the existence of an extended privilege and modify the behavior of a user's experience with a given solution accordingly.

Security capabilities also include the capability to integrate with an external authentication server (Open Directory or Active Directory) where an IT organization may maintain passwords on a central server for all the various applications in an organization, including FileMaker.

Although technically not really a security feature, it is possible to tie a FileMaker Server into an LDAP (Lightweight Directory Access Protocol) infrastructure so that users see only host servers that are applicable to their department/division, and so on.

FileMaker 7 introduced support for commenting within calculations, included the Let() function for declaring variables, and shifted syntax from Status functions to the more broadly applied Get functions.

FileMaker 8 contains its own scripting tool, ScriptMaker, which allows developers to create logical routines that run at the press of a button or the selection of a menu choice.

Scripts in FileMaker 8 can be set to run with full access privileges on a script-by-script basis that then overrides a user's security privilege settings.

Scripts can also be set to be available for execution from the Web. A wide majority of script steps are supported via both Instant Web Publishing and Custom Web Publishing.

FileMaker 8 boasts new alignment tools, and, on a layout-by-layout basis, a developer can decide whether record changes will be automatically saved, as they were in previous versions of FileMaker Pro, or whether the user needs to deliberately commit the record to save changes.

Button objects can now be included in tab sequences, and when a user has tabbed to a button object, she may "click" the button by pressing the Enter key or spacebar.

The biggest change with layouts is the Tab Control object. Developers can now create a tabbed pane without any scripting whatsoever.

FileMaker 7 represented a complete rearchitecting of FileMaker's file format and dramatically extended the platform's capabilities. The transition from the file format supported by FileMaker 3.0 through FileMaker 6.0 is still going on. A comparison between the two architectures demonstrates the dramatic growth the platform has undergone (see Table 1.5).