No doubt the topic of this section sounds suspiciously like some form of couples therapy. Not to fearit's a good deal less interesting than that, unless you're a database designer, in which case it's endlessly fascinating.

Relational integrity, also known as referential integrity, speaks to the notion that a database structure, as expressed in an ERD, also implies certain rules about what can and cannot happen in a database. If you read Chapter 5, you encountered the concept of optionality rules. An optionality rule may, for example, assert that an order must have at least one order line item. Or it may assert the more obvious truth that an order line item that doesn't relate to an existing order is an error.

Consider the example of shift assignments again. Suppose that there's a record in the ShiftAssignment table that references a militia member with an ID of 1002, when in fact there is no member with that ID. This could have happened because of data entry error (again, a great reason to use a value list in the way we demonstrated in the preceding section). It could also happen if that member had existed once upon a time and has since been deleted. In that case, without integrity rules to protect against this, the member's assignment records would be left dangling in the ShiftAssignment table. Database analysts usually refer to such records as orphans, and their existence is a violation of referential integrity.

This state of affairs clearly looks like an error you should avoid. There are a couple of things you can do to prevent this problem. To prevent erroneous entry of a nonexistent member ID, you can use field validation. To prevent the creation of orphaned records as a result of deletion, you can use an integrity rule. 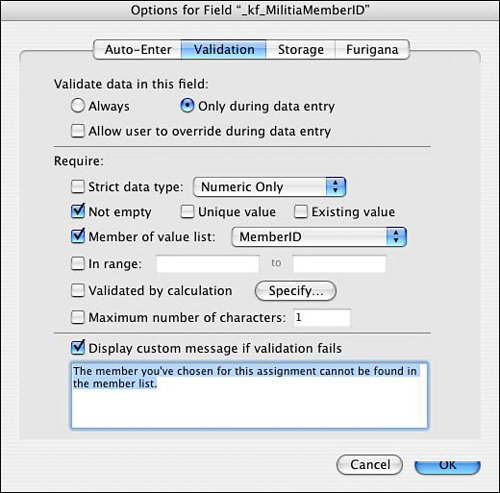 Now, if you were to try to enter a member ID that didn't already exist in the MilitiaMember table, you'd get a warning that the action was disallowed.

Deletion is another pitfall if you're picky about keeping your database consistent. What happens if you want to delete a member, and he already has shift assignments? Well, you have two choices: either forbid the deletion on the grounds that related assignments exist, or delete all the shift assignments along with the member himself.

Be sure not to check the corresponding box under MilitiaMember. This would have the effect of deleting a member record anytime a corresponding shift assignment was deleted. This is the wrong direction in which to cascade! Also be aware that cascade effects are cumulative. If you define multiple cascade-deletion rules in a system, a single deletion can sweep across multiple tables. Pay careful attention to the details of this feature until you're comfortable working with it. As with other mass-update operations in FileMaker, such as Replace Field Contents, or a data import, there is no way to undo such deletions.