The discussion in this chapter has focused largely on ODBC. In our experience, JDBC connectivity is less commonly sought for FileMaker than ODBC connectivity. It is an important capability, though, so we cover it here in some detail.

JDBC is a technology used by Java-based applications to connect to various databases. Like ODBC, it depends on the existence of drivers, each specific to a particular database. Unlike ODBC, because Java is cross-platform, the drivers are generally not platform specific (a very small class of drivers may be platform specific but these are rarely encountered). In this section well cover how to install and test the driver and the JDBC connection, and well look at using a JDBC-based tool to inspect an xDBC-enabled FileMaker database.

Testing for Java and Installing the Driver

The first step, whether on Mac or PC, is to verify that you have Java installed. Java should be installed by default on the Mac OS, and is often found installed on Windows as well. On either platform, drop to the command line (Terminal on Mac OS X, cmd.exe on Windows) and run this command:


Such a response indicates that your system has a Java Virtual Machine (JVM) installed and is capable of running Java programs.

If instead you get a response that tells you the java command can be found, your system does not have a JVM and youll need to download and install one. See http://java.sun.com for information pertaining to your specific operating system.

The next step is to install the FileMaker JDBC driver. The installer is included along with other additional files on the FileMaker install media. Look for a folder named JDBC Client Driver Installer. Inside the folder, double-click on sljcinstaller.jar. This will start the driver installer. You can choose any location for the driver. On the Mac OS, /Library/Java/Extensions is a good place. On Windows, you can create your own directory in a place of your choosing.

Configuring databases for JDBC access is no different from configuring databases for ODBC access. The two types of access share a unified extended privilege (fmxdbc) that determines xDBC access to the file. For purposes of initial testing, you may want to practice JDBC access on a single machine, by using FileMaker Pro or FileMaker Pro Advanced to act as the JDBC host (as described earlier in this chapter for ODBC local hosting).

When configuring ODBC for the first time, you tested ODBC connectivity by configuring a DSN, and then using the operating systems capability to test that DSN to verify that the FileMaker data source was running and accepting ODBC configurations.

JDBC works a bit differently (among other things, there are no DSNs with JDBC). The FileMaker JDBC install includes a JDBC testing application you can use to test your JDBC configuration.

The testforjdbc application is installed in whatever directory you chose for the JDBC client driver install. Inside that directory is a directory named testforjdbc containing, among other things, command scripts to start the testforjdbc application. On Windows, you can double-click one of the batch scripts testforjdbc.bat or testforjdbc14.bat. (The latter is only for systems that are running Java 1.4 or later, which is most current systems.) On the Mac OS, youll need to run your selected script from the command line. Assuming that you installed to /Library/Java/Extensions, you would open Terminal (usually found in Applications/Utilities) and type the following:


Regardless of how you launch it, your chosen script should start the Java-based testforjdbc application.

The interface is fairly bare-bones. Your first task is to make sure that the FileMaker JDBC driver is registered with the Java environment. To register the driver, choose Driver, Register Driver, and in the resulting dialog box type the following driver name:


Then click OK. You should see a message in the JDBC/Database Output box in the middle of the window that says registerDriver() succeeded, as shown in Figure 20.31.

Figure 20.31. Each Java application needs to register the FileMaker JDBC driver before using it. 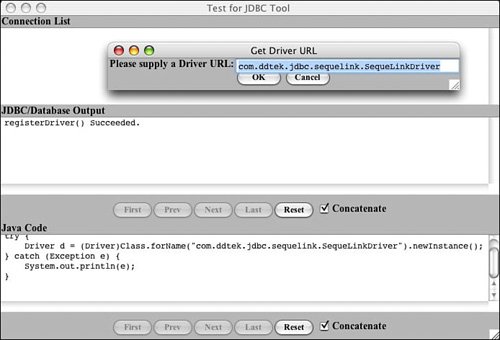 After the driver is registered, its time to try to connect to the FileMaker file as a JDBC data source. JDBC-based programs make a connection by issuing a call via a URL-like syntax. An example might be as follows:


This connection string (as its often known) tells a JDBC program to make a connection to a SequeLink data source (SequeLink is the name for both the ODBC and the JDBC drivers for FileMaker), running on the same machine on port 2399. The connection string further specifies that we try to connect to the data source called Sales, using a username of user and a password of pass. The serverDataSource in this case corresponds to a single FileMaker file.

You can make a connection in the testforjdbc program by choosing Connection, Connect to DB, and entering a connection string appropriate to your machine (your username, password, and database name are all you should have to change in the preceding string). The relevant dialog is shown in Figure 20.32.

Figure 20.32. JDBC connections are made via a URL-like connection string.

If you see a message in the JDBC/Database Output window stating that getConnection() succeeded, everything is fine. Youll see a new Connection window (mostly blank). This lets you know that your connection was successful.

If you wanted to, you could go on using the testforjdbc program to inspect and manipulate your FileMaker database via JDBC. As youll find, though, its not a very friendly tool. If you want to experiment a bit more with JDBC, you may want to grab a more intuitive tool. One such tool is DbVisualizer, from Minq Software. You can download a time-limited evaluation copy from http://www.minq.se/products/dbvis. DbVisualizer is written in Java, so it looks and works identically on Mac and Windows. Well walk quickly through the setup and configuration of a JDBC connection to FileMaker using DbVisualizer.

First, of course, you need a FileMaker database hosted somewhere and available for JDBC access. After the data source is ready, open DbVisualizer. Youll first need to register the driver (just as with testforjdbc), so choose Tools, Driver Manager. Next choose Driver, Create Driver (the menu will be within the window itself, not part of the application-level menus). The driver creation interface is shown in Figure 20.33.

Figure 20.33. In DbVisualizer, you need to first configure the FileMaker JDBC driver for use. 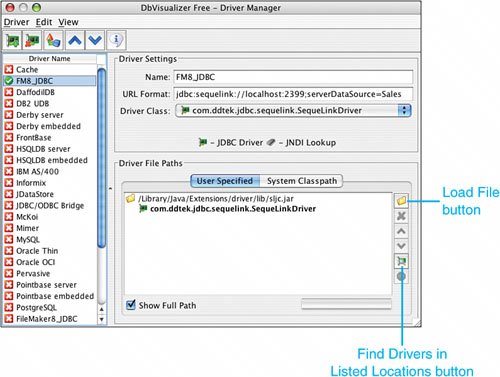 Fill in a name of your own choice for the driver. Its also helpful to fill in the URL format; DbVisualizer will display this format to you when you try to make a connection later. Each JDBC driver tends to have a slightly different URL syntax, so its helpful to have this here as a reminder.

Next you need to find the driver itself. To do so, click the Load File button. Navigate to the file driver/lib/sljc.jar within the location where you installed the FileMaker JDBC driver. After youve found and selected that file, click the Find Drivers in Listed Locations button. DbVisualizer should scan the file and find a driver called com.ddtek.jdbc.sequelink.SequeLinkDriver. As a last step, in the Driver Settings area of the screen, choose that driver from the Driver Class menu. The final configuration should look roughly like whats shown in Figure 20.33.

Next youll need to create a database connection using the new driver. Choose Database, Create Database Connection from the main application menu bar. You may be prompted as to whether you want to use the Connection Wizard; choose No (DbVisualizer has no installed wizard options for the FileMaker JDBC driver). Youll see the connection configuration screen, as shown in Figure 20.34.

Figure 20.34. The next step with DbVisualizer is to configure the connection to the data source. 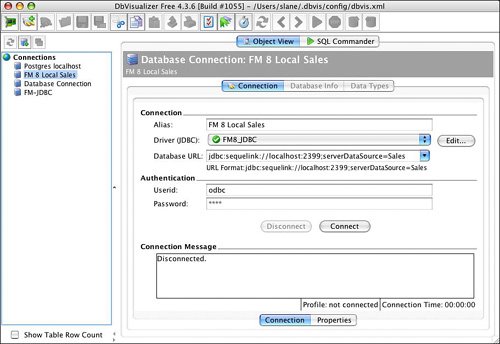 Choose a descriptive alias for the connection (probably something that mentions the name of the specific database being connected to). Select the driver you configured in the earlier steps (in this example its called FM8_JDBC). Next youll need to supply a correct connection string (database URL), just as with the testforjdbc program. Finally, youll need to enter the username and password, and click the Connect button.

If the connection succeeded, you should see some additional information under the name of the database connection in the panel at the left of the window. Specifically, you might be interested in opening the Tables object and choosing a table occurrence from those present in the database. You could then choose the Info tab to see some general information about the table, or the Data tab to see the actual row data, as shown in Figure 20.35.

Figure 20.35. You can use DbVisualizer to inspect your data directly. 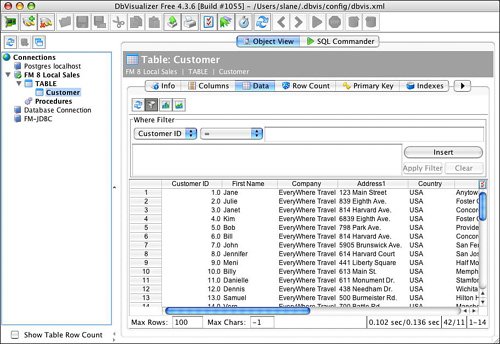 Many of the options you can choose in DbVisualizer may give you scary-looking JDBC errors when you e working with FileMaker databases. This is not because anything has really gone wrong, but because the FileMaker JDBC driver doesn support certain JDBC operations, especially those intended to extract metadata from the database (that is, information about the database: stored procedures, column types, and the like). If you see such an error, don worry, just keep exploring until you get a sense for which DbVisualizer features are supported by the FileMaker JDBC driver.


The intrepid may also experiment with using SQL directly against the database, via the SQL Commander tab, as shown in Figure 20.36. This is a great way to brush up on your SQL, and to learn which SQL features are and are not supported by the FileMaker JDBC driver.

Figure 20.36. You can also use DbVisualizer to experiment with running SQL queries against FileMaker. 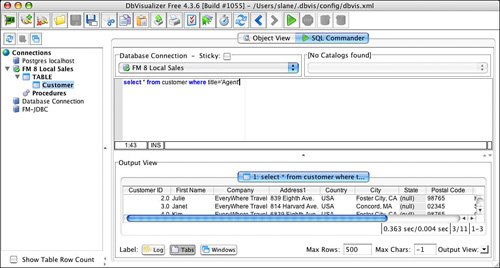