You can and should do a number of things before converting older solutions to FileMaker 8. Your pre-conversion tasks vary somewhat from solution to solution, but some categories of tasks are still common to most solutions.

Our comments here are aimed at people who are converting older relational (multifile) systems of some complexity. The purpose of doing any pre-conversion work at all is to make the post-conversion work go more smoothly; for single-file and simple relational solutions, you might not need to have rigorous conversion plans like this in place.

Also, by conversion here, we mean beta conversion rather than alpha conversion. In fact, many of the pre-conversion tasks that we discuss will cause you to want to make new alpha sets of the files. The simple difference between alpha and beta conversion files (as you'll recall from earlier in the chapter) is that alpha files are meant to be experimented with and thrown away, whereas beta files are intended to be turned into your new solution.

Converting a solution entails much more than the physical creation of new, upgraded files; you need to prepare both yourself and your environment for the conversion. The process goes faster and smoother if you spend a bit of time up front planning out the details. The specific preparation tasks you should do include the following:

The more familiar you are with a solution, the better your conversion will go. Even if you're the sole creator of a system, having up-to-date documentation comes in handy during the conversion process. We recommend having at least the following items:

If you use FileMaker Pro Advanced, you may want to create a Database Design Report of your old solution as part of your documentation process. Third-party tools such as MetaData Magic (from New Millennium Communications), Brushfire (from Chaparral Software), and Analyzer (from Waves in Motion) also are excellent documentation tools and are all highly recommended.

Whenever you link one FileMaker file with another, FileMaker uses a file reference stored in File A to locate File B. The operations that may require file references include defining relationships, performing external scripts, creating value lists based on the contents of fields in another file, performing an Open script step, and scripting an import from another file.

File references are visible and editable in FileMaker 7 and 8 for the first time. In previous versions, they existed, but were hidden "under the hood." When you convert files created in earlier versions, all the old file references are suddenly visible. You may be in for a bit of shock, in fact, when you examine file references in a converted solution and discover a hornet's nest you never knew existed.

To understand how that hornet's nest was created and why it can be difficult to untangle, you must understand how FileMaker managed file references in previous versions of the product. Prior to FileMaker Pro 5.5, all file references were stored as absolute paths: When you define a link from File A to File B, FileMaker remembers the full path to File B. On Mac OS X, that might look like /Macintosh HD/Documents/myDatabases/File B. On Windows, the full path could be something like C:/myDatabases/File B. If the link were to a hosted file, the link might include the IP address of the hosted file, as in 192.168.100.87/File B. If the hosted file were on the same subnet as the person defining the link, then the IP address wouldn't be stored; an asterisk would appear in the file reference instead.

The main problem with absolute references is that they tend to cause problems when you move files from one machine to another or rename files or folders. In those cases, FileMaker would pop up a message to the user saying, in effect, "I can't find File B...where is it?" You would re-establish the reference by pointing to the moved or renamed file. But rather than replace the previous reference, FileMaker would store the new path as an additional search path for the given link. If you had a file that had been developed over the course of many years and/or on many different machines, you may have had dozens of absolute paths stored in your files. If you ever had problems in previous versions where FileMaker would seemingly irrationally open the wrong copy of a given file, it was likely because there was an obsolete file reference higher up in the search order.

Another problem with file references in previous versions of FileMaker is that different linking operations might produce entirely new references. For instance, say you had created a relationship from File A to File B while the files were both open on your local computer. A file reference containing the path to File B would be stored. Then you moved the files to a server where they were hosted with FileMaker Server, and from your desktop you created a script in File A that called a subscript in File B. An entirely new file reference was created for the external script call.

FileMaker Pro 5.5 introduced the option to store only a relative path when creating links between files. This went a long way to solve the problems caused by renaming or moving files. Rather than locate File B with a full path reference, a relative reference simply indicates the path to get to File B from File A. For example, the relative path may be ../File B, which would indicate that FileMaker should look for File B in File A's parent directory.

Figure 18.4. In a solution that's been around for a few years, it's likely that you have a lot of redundant and obsolete file references. 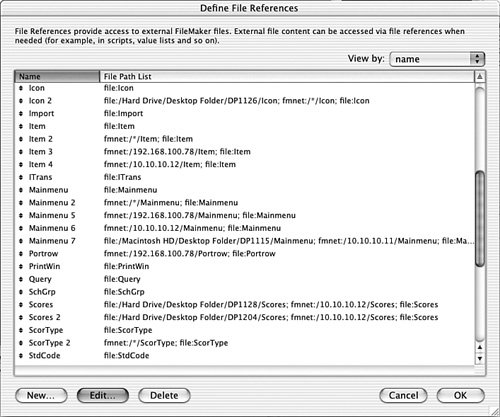 After conversion, you can, of course, manually change all the obsolete paths to updated, relative paths. In a complex solution, this may require manually editing hundreds of references. After you're finished, you'll have solved the problem of obsolete references, but not that of redundant references.

Be sure to make a backup of your system before you start playing with file references; a small mistake such as deleting the wrong one can have far-reaching consequences.

Cleaning up file references in a converted solution can be a very time-consuming and frustrating process. Thankfully, there's a tool called MetadataMagic, distributed by New Millennium Communications (www.nmci.com), which enables you to clean up file references in your system prior to conversion. The File Reference Fixer, one of the tools of MetadataMagic, provides several options for modifying file references. If you use the Auto-Fix function, only the most recently created relative path to a file is retained, and all internal links are updated to use that reference. Obsolete file references are then removed from the files.

In a complex solution, you may be better off using the Consolidate and/or Set Relative-Only functions. For instance, if you have files that span multiple FileMaker Servers or are located in multiple folders, the Consolidate function simply changes multiple and/or redundant references to a single file references.

Figure 18.5. If you run File Reference Fixer before conversion, the file references in your new files are much easier to troubleshoot and maintain. 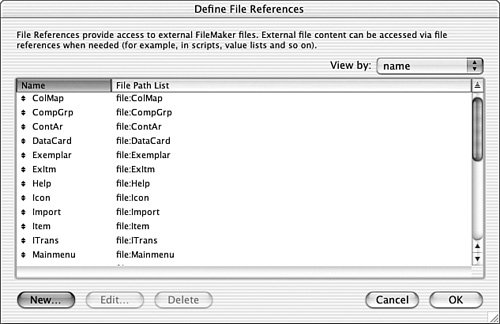 It's easy to see the improvement here. All the file references are now simple relative paths, equally well suited for deployment as a single-user solution or by FileMaker Server. Before using File Reference Fixer, be sure to read the documentation and practice on a set of test files.

In addition to file references, other potential post-conversion problems can be avoided if you do a bit of pre-conversion work. You can actually identify much pre-conversion work by examining the alpha conversion files. You may, for instance, discover you have objects with illegal names, which are placed in between curly brackets during conversion. These can be changed in the original system so that by the time you're ready to do your beta conversion, they're no longer an issue. By doing as much work as possible in the pre-beta conversion stage, you'll reduce the amount of time and work required to get your converted files ready for production.

If there are scripts, layouts, relationships, passwords, value lists, or fields that you know are no longer used or needed, try to eliminate these before conversion. If there has been case inconsistency in the entry of passwords in your current system, take the time to standardize them. These efforts will be rewarded by shorter conversion time and having less to test after conversion. Any other housekeeping in the original files can only be beneficial, including organizing scripts, editing object names, and archiving old data.